Hello and welcome. Trusting you are well prepared for the winter.
Way back when we were in the lockdowns and dreaded the eventual outcome the authorities were doing PCR tests and despite the the information available by the creator as below they ignored it and carried on and some made huge fortunes over it. 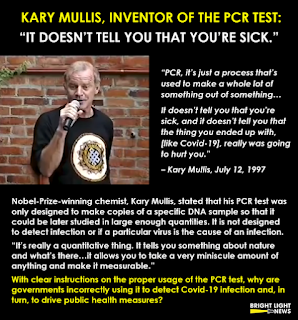 I wrote that I felt they were collecting DNA samples and I still think so. In the link below you will see the forceful collection of DNA by the Chinese on the Tibetans.

Whilst Chen Quanguo may now pose less of a threat to , the CCP is continuing its oppressive tactics and systematic destruction of Tibetan culture, language and religion.

Two recent reports have uncovered a mass DNA collection programme in . Police have forced 1.2 million Tibetans to submit samples of their DNA. They are using equipment made by Thermo Fisher Scientific, a  company.

Find out more about the DNA collection programme and take action now.
There is a new threat to : For the past few years,  has been systematically collecting DNA samples from Tibetans. As many as 1.2 million Tibetans have had DNA samples taken, including children as young as five.

This mass DNA collection allows  to build a genetic database, expanding its ability to strip Tibetans of their privacy and place them under constant surveillance.

The mass harvesting of genetic data in this manner is abhorrently racist, wildly disproportionate and, in the hands of the Chinese government and police, will enable yet more human rights abuses.

This plunder of Tibetans’ DNA is being enabled by international companies, key among them, Thermo Fisher Scientific.

Is somebody devising a nasty DNA targeted bio weapon somewhere? See Joe Biden's two new bills mentioned below. Hydrogen and atomic bombs will pale into a weak weapon against targeted laser bursts of a frequency tested DNA virus , the laser being the carrier wave for the virus and the recipient has a signal naturally in them and naturally unaware they are targeted and suddenly a whole race does not necessarily dies or is infected but that may happen but horror they may start to mutate and perhaps would prefer to die.

Doctors and scientists have had their homes invaded by police, faced imprisonment and lost their jobs because they questioned the Covid-19 narrative, a new study has discovered

The true extent of the censorship and suppression of doctors and scientists who did not follow the mainstream narrative of the Covid-19 pandemic is finally coming to light. Scientists have lost their jobs and doctors have been barred for speaking out against lockdowns, mask-wearing and vaccinations or offering effective treatments.

One doctor has had a $1 million lawsuit filed against him for taking an alternate view, and another had his home raided by police, who didn’t even have a warrant. Dr Jackie Stone, a doctor in who successfully treated Covid patients with ivermectin and colloidal silver, faces imprisonment, and many other doctors—such as leading cardiologist Peter McCullough—may lose their licenses.

Scientific papers have been retracted and their authors have lost their posts at universities and research centers or been “named and shamed” by medical authorities.

These examples are just a snapshot of the backlash against dissenters and are based on interviews that Israeli researchers have carried out with just 13 doctors and scientists who have questioned the narrative. This superficial analysis suggests that many thousands more have lost their jobs and had their reputations trammeled by authorities who have worked hand-in-glove with governments, mainstream media and websites, including social media platforms such as Facebook and Twitter, to silence alternative voices.1

The researchers fear the official narrative wasn’t created only to protect the public and avoid confusion but has been influenced by commercial interests that have earned vast sums from the Covid outbreak.

As the BMJ’s executive editor Kamran Abbasi put it in the early days of the epidemic, “Science is being suppressed for political and financial gain. Covid-19 has unleased state corruption on a grand scale and it is harmful to public health.”2

Want to read this article for free?

This is part of our subscriber content, but you can still read this article for free by joining our WDDTY community. You’ll receive the latest news and offers, and you can easily unsubscribe at any point. But why would you want to?

·                      Many have suspected that the U.S. government’s “security assistance” to Ukraine — which as of November 15, 2022, had surpassed $98 billion — is a money laundering scheme, perhaps relating to questionable activities involving American biolabs in Ukraine

·                      With the sudden implosion of the cryptocurrency exchange FTX, suspicions of money laundering in are gaining fresh support

·                      FTX’s founder, Sam Bankman-Fried — suspected of having absconded with $1 billion to $2 billion of client funds as the exchange went belly-up in mid-November — was a top donor to the Democratic Party, second only to George Soros, and had ties to the World Economic Forum

·                      FTX partnered with to help them raise funds for the war effort. Some believe the foreign aid the Ukrainian government received from the was put into FTX, which then turned around and donated money back to Democratic candidates

·                      An estimated $200 million were raised for and distributed through FTX to a bank in , but records show the Ukrainian government only used $22 million of that money. The remaining $178 million appears to have vanished, leading people to suspect it was laundered back to the

·                      Agenda 21 (Agenda for the 21st Century) is the inventory and control plan for all land, water, minerals, plants, animals, construction, means of production, food, energy, information, education and all human beings in the world

·                      We’ve seen various facets of Agenda 21 being implemented throughout the last three years, under the cover of biosecurity and the global COVID-19 pandemic. The Green New Deal (Green Agenda), “Build Back Better,” the Fourth Industrial Revolution (the transhumanist movement) and The Great Reset all further and facilitate the implementation of Agenda 21

·                      Agenda 21 is based on the ideology of “communitarianism,” which argues that “an individual’s rights should be balanced against rights of the community.” Community, however, in the mind of the globalists, is made up of nongovernmental organizations (NGOs), corporations and government, which are to dictate what happens around the world. The people are not really part of the equation

·                      “Sustainable development” is NOT about recycling or making sure there’s enough food and resources for everyone. It’s about moving populations from rural and suburban areas into concentrated city centers where they and their use of resources can be monitored and controlled

Posted by GEOFF FREED ONLINE at 09:36