TO MASK OR NOT TO MASK THAT IS THE QUESTION?

Hi with the winter arriving and for some breathing it is difficult and in summer some find breathing difficult this issue is becoming tantamount almost contentious and I not wearing a mask and carrying a large exemption notice have been accosted; I have been labelled a killer, an old fart who does nothing for the economy, a reckless old f-----r, a uncaring old dodger and useless member of the community and waste of space and attacked physically.

A young couple thrown off of an airline because their baby would not wear a mask.

Statistics Show Mask Use Have No Impact on Infection Rates

Another way to shed light on whether masks work or not is to compare infection rates (read: positive test rates) before and after the implementation of universal mask mandates. In his article,32 "These 12 Graphs Show Mask Mandates Do Nothing to Stop COVID," Yinon Weiss does just that.

He points out that "No matter how strictly mask laws are enforced nor the level of mask compliance the population follows, cases all fall and rise around the same time." To see all of the graphs, check out Weiss' article33 or Twitter thread.34 Here are just a select few to bring home the point: 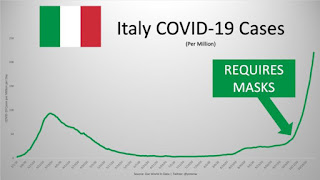 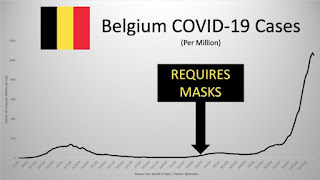 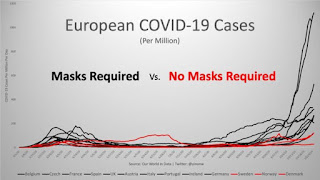 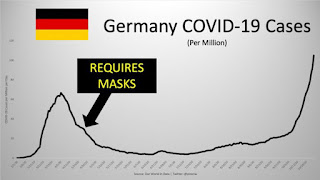 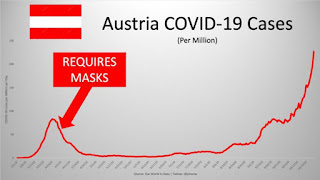 Mask wearing, which clearly does little in terms of preventing the rate and risk of infectious spread of SARS-CoV-2, delays the inevitable, which is the acceptance that the disease known as COVID-19 is part of our future, just like the pandemic swine flu H1N1, all the influenza viruses that shift with each season, tuberculosis, Zika and a whole host of other viruses.

We simply cannot prevent any and all COVID-19 deaths any more than we can prevent death from any other cause. All we can do is understand what makes us vulnerable, and take steps to address those underlying weaknesses. In the case of COVID-19, that includes addressing metabolic health, insulin resistance, obesity, and nutritional deficiencies such as vitamin D, magnesium and zinc.

By doing that, you make yourself more resistant to infection and complications thereof. For nine months, the focus has been on masking, social distancing, shutting down businesses and getting a vaccine. Time and again, the goal post has shifted, such that now we're told that even with a vaccine, all of the other measures will still be required well into 2022.

There's a reason why none of it makes sense, and that is because the measures have nothing to do with preventing infection. They're tools used to implement a new economic and social system, as explained in "What You Need to Know About the Great Reset," "Who Pressed the Great Reset Button?" and "Technocracy and the Great Reset."

We need to start presenting a united front against those who seek to destroy society as we know it and steal our assets and resources. One of the first steps toward that end is taking a firm stand against nonsensical and scientifically unjustifiable rules such as universal mask wearing, be it on planes, in stores or outdoors.

While it may not always be possible, consider not frequenting or buying from businesses that kick people out for not wearing a mask. Remember that collectively we have financial clout and, typically, hitting businesses in the pocketbook is the most effective way to demand change.

Posted by GEOFF FREED ONLINE at 04:49 No comments:

WHERE DO I BEGIN----VITAL INFORMATION

Hello and a very warm welcome.

There is so much and more on the way;

This is how the main strategies are being are being targeted at the general public in every country in its own unique way.
I have posted before that in my view it is not only a false test in the sense they can state anything by it as above, but they are harvesting as much of our DNA as possible and keeping it in a DNA bank similar to the seed bank in Norway in order to carry out further targeted or weaponised DNA and mRNA vaccines. That is why there have been many people speaking about population growth. These are my views and are observations.
What concerns me is that Professor Neil Ferguson is there and if you can remember what Patrick Wood said about him and the computer modelling and the panic he caused and the visits of two prostitutes to his home in the first lockdown and he never got prosecuted and it was at that time that Dominic Cummings broke the lockdown and never got prosecuted and that Ferguson and Imperial College are under the wing of Bill Gates. This who Nervtag are;
https://www.gov.uk/government/groups/new-and-emerging-respiratory-virus-threats-advisory-group, just look who they are open up the link. They advise the Chief Medical Officer Professor Chris Whitty who said ;

WHAT MADE HIM CHANGE HIS MIND? 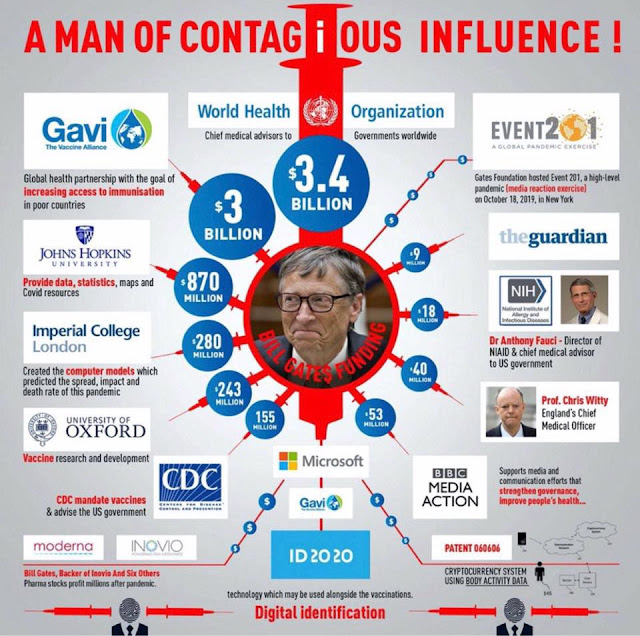 Look at Diagram and then Prof. Witty (Whitty) and then look at MHRA

What made him change his mind---could it be the in the MHRA diagram and the money involved and the Imperial College link to Gates, Ferguson and how many in NERTAG and of course SAGE. Just speculation folks and maybe a an ex forensic man. 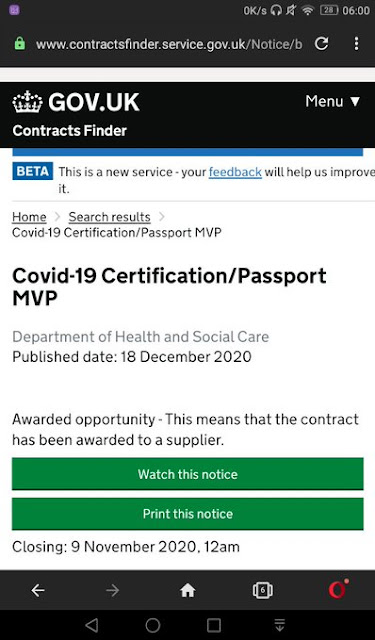 Courtesy PRS
This is reprehensible, this contract was tendered at the same time as saying the vaccine is voluntary and then here were whispers of perhaps there maybe some restrictions and it looks like it is inevitable some restrictions will be made, it is voluntary and yet by blackmail and connivance there will be some social isolation and if people have a go at you for non mask wearing then with vaccine refusal one might become a pariah. A voluntary mandatory vaccine as confusing and muddling as the tier lockdown instructions, I feel deliberately ambiguous so as to add more fear and undermining.

Program of the High Commissioner  (Do not exactly know what this document refers to; I believe it is something to do with a contract well before the Brexit thingy was to be ratified)  Apologies cannot get translation. This is supposed to be the translation-- Just given to me as I was about to POST
France's leaked COVID-21 plan February 2021 , France will announce that Covid 19 has mutated into a deadlier strain . Aka Covid-21 Lockdowns and restrictions return again April 2021 YES 2021 DYNAMITE Military will be deployed July 2021 for protests and dissidents. The game is onCANNOT DOWNLOAD VIDEO GO TO LINK BELOW ---VERY GOOD
https://naturallyhealthynews.info/medical-professionals-from-all-over-the-world-speak-out/  26 DOCTORS FROM ALL OVER THE WORLD DISCUSS VACCINE AND COVID AS A HOAX AND BAD.
The One and Only Corbett Report
In my opinion one of the best investigative journalists there are.
Viewing this video it reminds me of the links in the chain; first the coming mandatory use of the Smart Meter, The change of all cell / mobile phones to Smart 5 and 6G (you will see above the surveillance needed for the mandatory or false mandatory vaccine passport, this will be linked to a ongoing rapid deployment of Smart Phone 5 and 6G masts every 320 yards apart and more mobile and cell phone masts (this is already in China) and then the introduction of Smart Zones with eventually Smart Cities to Smart Countries, this will be achieved by millions of satellites interfacing with with the Smart Towers and our bodies being recognised by the nano particles within it. Too futuristic see POST Monday 21st September 2020 'Welcome to Smart City' then compare it with the video and Patrick Wood last Post 'The Time is Now----- 4th Video down.
I started off way, way, way with many, many POST's on 5G and a great read is Arthur Firstenberg's book 'The Invisible Rainbow'
A cordial discussion between a pro vax and another view professionals
Below you will be astounded at the official Statistics
STATUTORY NOTIFICATIONS OF INFECTIOUS DISEASES in ENGLAND and WALES week ending 20/12/2020 50 COVID cases. Yes, 50.
https://assets.publishing.service.gov.uk/government/uploads/system/uploads/attachment_data/file/947077/NOIDS-weekly-report-week51-2020.pdf

re fat emperor tweet>There were 1,137 free beds in hospitals on Christmas Eve morning...Covid19 patients accounted for only 10 per cent of all patients in critical care, and 62 critical care beds were vacant" But yet they want ruinous unscientific lockdowns to start tomorrow. This is from his latest information and regarding Ireland.

May I suggest you look at the link below and you will find a video like this image above and it is Bill Gates describing how your DNA will be permanently altered artificially and a commentary to explain this and then piece this with the TED extract that was deliberately 'cut' and found in POST 20 December 2020 'The Time IS NOW----- and scroll down to Gates Image and in text are two slides of the cut out of the TED talk. Bill Gates caught on video admitting vaccine will CHANGE our DNA FOREVER.
https://www.brighteon.com/45339525-7bc2-4fdb-84b5-5136345f9cce
Thank you for looking at this blog and POST and I trust you can alert people to this. It may too late to stop these maniacs and Bo Jo Message at Christmas was literally saying ONLY the vaccine will save us.
Take Care keep your own God Given, Nature Given DNA blue print and remember we don't know what they have programmed into the mRNA and also that NANO particles in hydrocele(hydrocel) lipid solution as an adjutant and bearing in mind nano technology and particles can be tweaked to be a communication device.
Be Well
Geoff
“Everything in Life is Vibration” – Albert Einstein

Posted by GEOFF FREED ONLINE at 08:16 No comments: