Hello.  Welcome to out of space in skulls and out of brain for the unbelievable economic implications if they prove to be authentic. Also the possibility of a 'war' between two New World Orders', and a possibility of a third New World Order of a growing spiritual evolution as below video hints of.
https://www.youtube.com/watch?v=pEow50Lm1vU&feature=em-subs_digest-vrecs   'The New Humans' by Mary Rodwell.  You think you know it all----well out of space and out of mind.

Non Human DNA found in skulls. (See also the late Lloyd Pye's ' Starchild Project' extensive DNA testing already in progress. 5 mins
Harvey Organ the 'wheel' will fall off so to speak by Christmas 2014? 30 mins
This might blow your socks off.  Harvey Organ may have something.  Way back I reported on:-


Breaking news Lord James of Blackheath has spoken in the House of Lords holding evidence of three transactions of 5 Trillion each and a transaction of 750,000 metric tonnes of gold and has called for:-

So my Lords, I believe that this is such an important issue now that I've put everything I've got on this subject into a 104 megabyte memory thumb. And I want the government to put this to some suitable investigative bureau and take everything I've got on the subject and find out what the truth is about what is going on here because there is something very seriously wrong. Either we have a huge amount of tax uncollected on profits made, or we've got a vast amount of money festering away in the European banking system which is not real money, in which case we need to take it back. My Lords, I ask for an investigation and please support my plea.
Link (as far as I am aware, mind you I have not followed it up{to date 25-10-14} no atiocn was taken)

There was a story going round that the USA and UK denied issuing bonds, a kind of IOU and that 14 countries, one of them was Malaya(link to Malayan Airlines--owner Jacob Rothchild---planes MH 370 and MH 17, his / their planes) read in conjunction with Harvey Organ, the collapse of the dollar a New World Economical Order and currency, perhaps BRICS OUTDOING THE POLITICAL ONE by the Kissinger, Bush, Rothchild's, Rockefeller's, Morgan and the banker cartels, no wonder they the USA and co want a 3rd World War.
I have been told that these 14 countries are mounting a legal case costing trillions of dollars to get their gold back.  The story also alleges that these countries gave their gold to the USA AND UK for safe keeping thinking they would never be attacked and then the USA and UK denied they had issued the bonds and that the bonds produced by those countries were forged and they were claiming their gold as fraudulent and a means of exacting that gold by unfair means.

Another view of what may be coming. 7 mins
USA TREASURY IN PANIC 10 MINS-----backs up Harvey Organ above. 10 mins
NASA RECEIVES SOS FROM ANOTHER GALAXY
I recorded this in Post 165A and was a researcher in this incident found it to be authentic.
The only question I had was that I thought and so did others it was Reginald Bosanquet the broadcaster and not Ivor Mills.
More on silver and the economy. 16 mins
http://www.wifiinschools.com/
If you are strong enough READ THIS LINK.
http://www.emrsafety.net/
http://articles.mercola.com/sites/articles/archive/2014/11/04/ebola-vaccines.aspx?e_cid=20141104Z3_DNL_art_1&utm_source=dnl&utm_medium=email&
Auto pilot car.  4 mins
Wild December Animal and Birds---beautiful.  Contrast as Audi above and Nature. Perhaps they can work together as has been shown in some logging enterprises.4 mins
MOONLIT AURORAS: Earth is passing through a fast-moving stream of solar wind, and this is stirring auroras around the Arctic Circle bright enough to see through the glare of the nearly-full Moon. Tour guide Gunnar Hildonen sends this picture from Tromso, Norway: 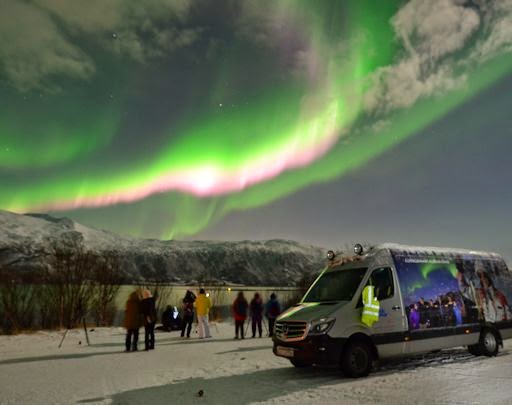 "Lady Aurora just got crazy in the eastern sky," says Hildonen. "Several of my guests were close to crying. It was pink and violet Rock-n-Roll, and it felt like it should never stop. Yes, I am very glad that I have this job."
The moonlight is intensifying ahead of this Thursday's full Moon, but the auroras might be intensifying, too. NOAA forecasters estimate a 40% chance of geomagnetic storms on Nov. 4-5 as the solar wind continues to blow.(Courtesy Spaceweather.com)
This could be an indication of some possible radio / transformer / satellite interference.
HIGH SOLAR ACTIVITY: Solar activity is intensifying. Sunspot AR2205 has unleashed at least 4 strong M-class solar flares in the past 24 hours (Nov. 5-6), and it appears that stronger explosions could be in the offing. NOAA forecasters estimate a 25% chance of X-flares on Nov. 6th. Also from Spaceweather.com
IT IS ALSO A FULL MOON IN SCORPIO ON NOVEMBER 6 2014 AT 22.24 GMT, 23.24 CUT, 0.24+Australian Capital Territory Time, 17.24 USA  Eastern Standard Time.
Although this would be out of date now, I included this so that read in conjunction with my Space Weather articles, repeated so many times and now again, in order to note affects / effects.
http://www.glcoherence.org/monitoring-system/commentaries.html?mtcCampaign=9228&mtcEmail=13526879
http://www.energygrid.com/destiny/geoff-freed/2010/10.html
From the talk to be presented:
After death we become free to form certain thoughts, feelings and perceptions that we are unable to do while handicapped by a physical brain. However, we can do much to prepare the physical brain to be a better interpreter of truth than we currently do.  Much earlier in evolution, the human being's mechanism was, in some ways, actually finer rather than coarser, as Darwin’s theory of evolution would have us believe. People then were able to look into the spiritual world and to accomplish the things that their soul intended them to do for that lifetime. Due to humanity’s desire nature being bound up with the material rather than the spiritual, many now pass through the portal of death with unprocessed thoughts, and with feelings and perceptions which were unexercised and unaccomplished during physical incarnation because of coarser bodies and a materialistic orientation.
The exercise of consciously building a bridge from this world to the next, as well as helping our own transition, will eventually enable us to maintain contact with our friends and co-workers who have passed on and valuable service can be carried out through this collaboration. We should always think of those co-workers and those close to us as present and still part of the same web of thought and of service. Steiner said, “If only we could bring into human hearts today the fact that life is impoverished when the dead are forgotten.” (Courtesy Lucis Trust to be presented at their London HQ on 6th November 2014 at 18.30)
https://www.youtube.com/watch?v=7AAJ34_NMcI&feature=em-subs_digest-vrecs  5 mins. Dr Edgar Mitchell and ET.
UFO AROUND SATURN-----SUPPOSEDLY LEAKED RUSSIAN INFORMATION. 4 MINS.
A huge disc over Earth taken from ISS released by Mexico.  These are genuine and could be taken down very shortly.
GCHQ and Snowden and UFO---could be a ruse, a deception or a message?
https://openmedia.org/ourfuture?src=156959
The FUTURE OF THE INTERNET.  PLEASE READ THE LINK ABOVE.  BEFORE ITS TOO LATE. Radiation from the flare ionized the upper layers of Earth's atmosphere, producing a short-lived HF radio blackout on the dayside of our planet. This is the sort of disturbance that ham radio operators, aviators or mariners might notice.
The explosion also hurled a CME into space at 600 km/s: movie. As CMEs go, this one is neither fast nor is it heading directly toward Earth. At most, we can expect a glancing blow to Earth's magnetosphere in a few days. Even more likely is no impact at all. NOAA analysts are working on a more precise forecast, so stay tuned. Aurora alerts: text, voice  Courtesy SPACEWEATHER.COM
MARTIAN METEOR SHOWER: Yesterday, NASA held a press conference to discuss what happened when Comet Siding Springs buzzed Mars on Oct. 19, 2014. An international fleet of Mars orbiters observed the encounter using a variety of cameras, radars, and other sensors. Among many findings, the highlight was a "spectacular meteor shower" detected by NASA's MAVEN spacecraft. MAVEN did not actually see streaks of light in the Martian atmosphere--the spacecraft was sheltering behind the body of Mars during the comet's flyby. But when MAVEN emerged, it found a glowing layer of Mg+ (a constituent of meteor smoke) floating 150 km above the planet's surface: The "smoke" was made of ionized magnesium and other metals shed by the disintegrating meteoroids. The data are consistent with "a few tons of comet dust being deposited in the atmosphere of Mars," says Nick Schneider, the instrument lead for MAVEN's Imaging Ultraviolet Spectrograph at University of Colorado, Boulder. "A human on the surface of Mars might have seen thousands of shooting stars per hour, possibly a meteor storm." He further speculated that the meteor shower would have produced a yellow afterglow in the skies of Mars because the meteor smoke was rich in sodium ions.
Jim Green, the director of NASA's Planetary Science Division in Washington DC says there was a lot more comet dust hitting Mars than researchers expected, pre-flyby. Radars onboard the ESA's Mars Express spacecraft and NASA's Mars Reconnassance Orbiter also detected signs of meteor-related ions. MAVEN and the other spacecraft are continuing to collect data as the atmosphere of Mars recovers from the encounter.(Courtesy spaceweather.com)
Until next time please take note of the solar 'stuff' and the connections to biology and crime and so on .
Be Well.  Geoff
Posted by GEOFF FREED ONLINE at 04:14