Welcome dear readers.  Many are feeling a kind of climax an expectancy.  If you are and it is tinged with fear, a great healer I knew suggested 'Expect a Miracle' but leave the details to the Father(His word for God, The source of life or your choice).  A friend emailed and said he and her partner felt fraught with racking anxiety and they had no reason to be. 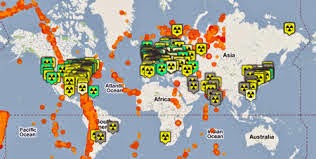 Courtesy googlemapsmovie.blogspot.com
This German Google Map shows the locations of the world's nuclear power plants. It also shows the locations of all the power plants currently under construction, those that are suspended and those that have been shut down.
The map shows that Japan currently has plans to build another nuclear plant on its east coast at Ōma. I wonder if it will ever be completed.
The map also contains two layers that let you view world earthquake data (with a magnitude of 5 or greater) for the last twenty years.
http://vimeo.com/109378796

Is nuclear power a sustainable or safe solution to ongoing energy demands around the world? Fairewinds’ Arnie Gundersen was invited to speak in August at the WAVE conference sponsored by Life Chiropractic College West. More than 1600 chiropractors attended the conference near San Francisco, California to hear speakers like Arnie Gundersen and Erin Brockovich talk about speaking truth to power. Leading chiropractic educators were also joined by mind-body experts including Larry Dossey, MD, a leading proponent of the power of intention to heal; epigenetics pioneer Bruce Lipton, PhD; and Lynne McTaggart, author of The Field; as well as ADHD Nation author Alan Schwarz.
Arnie spoke about the four problems that will be created worldwide by building more nuclear plants. As you will see in the video, Arnie is using the iPad app Keynote for his TED-like presentation.
Conspiracy----official trailer.  It seems to me the problems seem so vast that a kind of apathy ensues.   What can I do?  They have the power, the money the resources. The lesson I am learning is to walk my talk and 'hand it over' to a greater power.  My ego rebels because it wants to a controller, a power super man. This is what we are facing. The military, the spying into our lives, forceful medication and so on. Great wise beings have said ' let go, let God, let go let flow, in my own strength I am not powerful it is the Life Force in me that is'.  IT IS hard to trust the invisible, it is more of a feeling, an inner certainty.  Not will power but a kind of inner knowing which translates into a rare kind of courage. This is my lesson now at this time when I am faced with a huge problem, yet I could solve it one way however, this would lead to further confrontation and would be very detrimental to me in the long run. I am racked with fear and anxiety, and yet when breathing, meditating, periods of relief come along. Then the ego kicks back, I call the ego the collective ingrained programmes that have been instilled in me. Especially the subtle 'telepathic' feeling nuances whilst in my darling mothers womb, believe me the foetus and the developing child 'FEELS' everything, and cannot reason it. My Mum had a very nervous and anxious disposition,and had many nervous breakdowns.  I can feel this in me as a inexplicable anxiety. I am so pleased to have this opportunity to 'feel' it and witness, breathe and see it unfold.  Reasoning it, judging it, blaming the external source only acerbates it, so a letting go, a surrender, mindful awareness seems appropriate.  As I go deeper into the feelings, getting to the core, it seems to want to justify itself and defend itself, as it realises it is not real, a programme at best.  I guess the world and countries feel the same.  Many I know are going through this process maybe in externally different scenarios but facing their deepest core issues at this time. 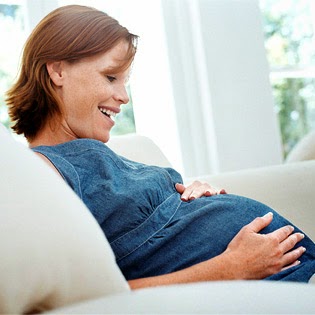 Extract from S. Raymond ' When I was at nursing school, I remember seeing a newborn baby strapped to a 'papoose board' shrieking shrilly as he was being circumcised. The obstetrician assured me the child felt no pain, and that he was not emotionally distressed.  He just did not like being confined on the board. All I could see was a child in terror and pain, a child who seemed clearly traumatised, but the physician insisted the newborn was a 'creature of very simple reflexes' who was too neurologically immature to experience pain, and would experience no ill effects even if he was frightened.
Now we have much documentation of the consciousness, incredible skills and learning ability of newborn and unborn child. We know they can see show preferences and dislikes, recognise Mothers voice and smell and also recognise human facial characteristics on the first day of life.  There is clear evidence of learning in the utero, and the newborn child shows a wide range of emotional expression with surprisingly subtle nuances.
Most importantly, we know there is profound emotional learning in utero and in the first days of extrauterine life, and that circumstances such as early separation  from parents or the manner of birth can have long lasting effects. We have to totally redefine our perception of babies, and in so doing, we are are having to greatly expand our perceptions of what it means to be humans. As we learn more about conception, we expand our boundaries and perceptions of human-ness even further'
http://www.real-personal-growth.com/res_fixing/graham_farrant/graham_farrant_interview.htm  An interesting interview which you may find fascinating.
What must this do to babies and children in war torn areas and broken homes and so on? 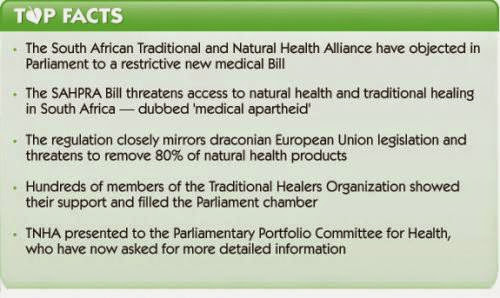 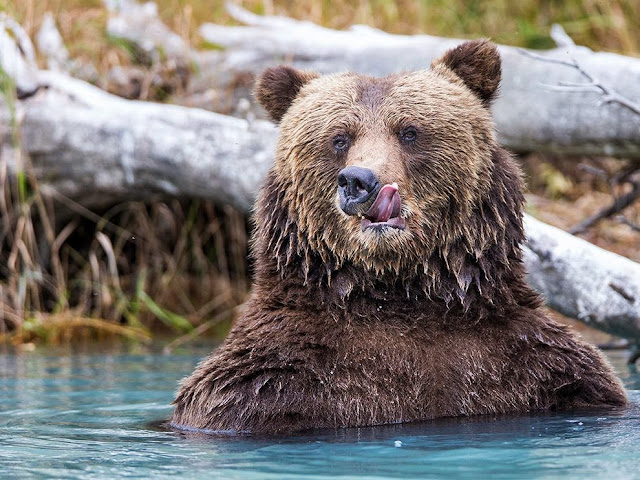 Yum Yum (know the feeling and thanks Rob)

Photograph by Rob Daugherty, National Geographic Your Shot
While visiting Alaska’s Lake Clark National Park, Your Shot member Rob Daugherty planned to photograph coastal brown bears. He saw 21 bears on the first day alone. He came across this one about two hours into a boat ride on Crescent Lake. “He had just finished eating a salmon,” Daugherty writes. “It was an epic moment to photograph him as he licked his fishy, post-meal chops.”


Daugherty’s picture recently appeared in Your Shot's Daily Dozen.
https://www.youtube.com/watch?v=ym0mM3ekUgA&feature=em-subs_digest-vrecs   6 mins of a 1968 prophesy by a 90 year aged Lady from Norway.
An amazing wing suit flight. 3 mins
Holistic grazing------grasslands turning to desert.  4 mins
SPACE ALIENS LIVE AMONGST US. 7 MINS
PLEASE look at my UFO STORY THAT I GOT IN THE  late 60's and 70's  I was ahead of the info then:-
http://www.energygrid.com/destiny/geoff-freed/2005/05.htmlIt was posted in 2005 as above but I did workshops on it from 1969 onwards.
PLEASE ALSO SCROLL DOWN AND ON THE WAY VIEW MATERIAL UNTIL YOU GET TO PROFESSOR CHANG AND PHOTO OF ALIEN LADY IN POST 2.
PLEASE LOOK AT :-

See comments from Crick and Watson.  Read further down about a Rocket Scientist Josef F Blumrich.
Too Many cooks---great humour--- stay with it until the end.  11 mins
Leaked ----- large body behind Saturn.  5 mins. (19-11-14)
An amazing badger----wow!!!. 5ins
http://spaceweathergallery.com/indiv_upload.php?upload_id=104782
GROUND CURRENTS IN NORWAY: A weak CME expected to hit Earth's magnetic field on Nov. 20th did not reveal itself as an obvious disturbance in the speed of the solar wind. Nevertheless, it might have been there. A surge in ground currents in northern Norway suggests a stealthy CME impact might have occured, after all(Courtesy spaceweather.com) 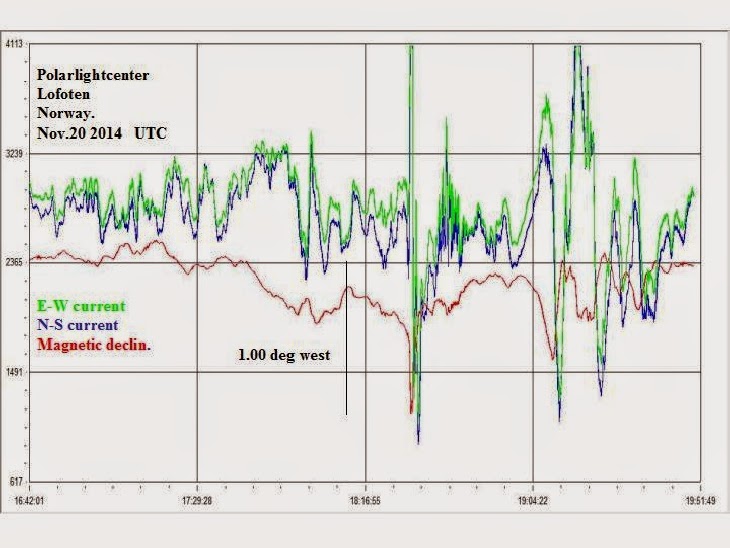 I have always stated that the influence of any Cosmic or Solar activity can be felt in some way on Earth. Our feet are highly sensitive to vibration.  See the articles I have outlined in so many Posts.  Some of  the vibes are  are beneficial.
http://www.glcoherence.org/monitoring-system/commentaries.html?mtcCampaign=9228&mtcEmail=13526879
http://www.energygrid.com/destiny/geoff-freed/2010/10.html

Russia bans all GM foods. 3 mins
http://www.theguardian.com/lifeandstyle/2014/mar/23/everything-you-know-about-unhealthy-foods-is-wrong
Fake Video by NATO. 8 mins. You had better read these quickly------if you look into www.energygrid.com earlier videos in Alien section and others and in some of my earlier POSTS -----THEY ARE BEING REMOVED.  THERE WAS A STARK WARNING FROM THERESA MAY THE UK HOME SECRETARY INTIMATING ABOUT INTERNET MONITORING AND CENSORING. ONE WAY AROUND THIS IS TO VIDEO FROM YOUR CAMERA FROM THE SCREEN, ALSO PUT BAKING FOIL AROUND SKYPE LENS CAMERA AND ALUMINIUM PLATE AROUND OR BEHIND SMART METER.
UNTIL WE MEET AGAIN. BE WELL . GEOFF
Posted by GEOFF FREED ONLINE at 04:07