Hello and greetings.  When I started blogging in 2005 and before that lectures and workshops from 1969 onwards a number of facts and experiences have constantly reared up.  There were cycles of experiences shared by many of my friends and contacts. One huge one was in 2005 when I did the first blog for the late energygrid now archived and unfortunately many of the pictures, videos and lead articles have either been taken down, licence expired or just missing. Now some twelve years later another 'biggy' has arisen.
I am enclosing some Videos that maybe unrelated to the POST but maybe of interest
a sort of surprise packet so to speak

Way back in 2005 many people emailed me and friends phoned and there was a workshop held on it with some 150 people attending. This time is just correspondence by email, Skype, phone and a few meetings. The general symptoms are similar to 2005 but with more incite and wisdom as the years rolled by. All of us are meditate-rs and searchers for the Self, this does not exclude non meditate-rs, some people are naturally attuned to what's going on and this is on the rise, which is certainly disturbing to some factions.
No. 2 surprise

These are the synopsis and precis of the communications; extreme fatigue, several views on this.  One chemtrails which are pouring poisons on us and the Earth and so affecting the soil and nutrients even though they maybe organically grown. Aluminum particles containing an electrical charge of some sort or magnetic frequency in the aluminium that is 'drawing the chi or life force' the life force out or diminishing or changing the structure of it, hence making the breathing hard in some cases or just feeling 'I am not being nourished by my environment'.
Food tasting insipid and 'weak' sleep being saturated with strange scenarios and the mind being unable to find peace even in long term meditate- rs and when meditating restlessness and intrusions of a subtle vibe.

There was a lot who felt that Alzheimer's, senility and brain 'mashing and washing' was a way to not only dumb down the populace but to stop the 'next step in evolution happening or delaying it' and that weather manipulation and GM foods along with media and false flag fake news was conspiring to make choices harder and wear people down and cause depression and lethargy.
Then there is a pressure build up as the energies of ascension build up and the Cosmic Rays herald in new signals and codes to evolve our DNA in order to bring about homo energetica or spiritulana and these are 'pushing ' out old redundant behavioral patterns and outdated modes of living.  Some felt they were going out of their heads and when they 'exploded' they reached a new clearer space and the debris of the old 'fallout' was settling in the collective unconscious and was being purged by some of the new energies.
No. 4 I was involved in this one

The most fascinating aspect was that in many so 'called conspiracy' articles as this might be classed there is reference to the deep state' the industrial military complex, the elite and the Illuminati and many other names. In this it was felt that the deep state was the same as a layer in the sub and unconscious collective mind, I have used the image below many times. 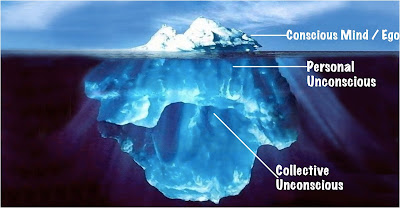 Courtesy Breakthrough Counselling & Holistic Healing. Bangalore
I would add one more level below collective unconscious as Source level of Life, God, Cosmic Consciousness or for Atheists Life Force Level sourced accidentally from the Big Bang.  During meditation should one go very quiet, thoughts subsiding and not asleep, in a trance and so on, a dynamic mind, some feel a deepening as if going down a mine shaft and then flowing out or bursting out into a light and serenity, others go up and out.  It is in some of the levels before reaching this that pure dark evil can be touched and one can become possessed by darkness and demoniac attacks.
With so many of the 'elite' dong black satanic rituals these are the levels that feed the the personal conscious mind.  In my forensic career and my clinical work I witnessed many, many cases of people who did not practised the 'black rituals' but never-the-less became victim to them. Drug abuse medical or so called recreational drugs can blast the mind open or gently prise the 'door open', violent videos and films, exposure to the horrors of war, trauma, extreme stress and over sensitivity and using protection with symbols and chants and so on, they are useful at first along with mantra, yantra and affirmations, also using personal will power and anger also sometimes maybe efficacious.

The most recommended way is to go deeper and out into the Ocean of Life as above remembering the icebergs of 'frozen thought' encapsulated by the personal and collective are solidified as one's reality and all bergs were originally free flowing unlimited ocean and in the analogy the endless sea of life flowing in the Universe narrowed down into a limited personal or collective mind.

The next step of evolution is about to take place and the elite do not want this; awakened en masse population demanding free energy, clued into awakened and heightened bright minded and free from the tethers of dogma and rooted in compassion will not be good for their profit and power and the thought of a compassionate humanity using technology harmless to the planet and themselves and free, encouraging beauty, restoring the Earth and co-joining with  ET to travel and explore the wonders of the Universe without raping or polluting others environments or races no matter what they look like or their social etiquette maybe. These are some of the main issues discussed.  We are talking birthing pains of a new era and the waters are about to break, the babe wants to come out and be free and let go of its its birthing confinements.  Can it be done? Is it just a nice dream and an intellectual masturbation? It will depend on how many the Illuminati can destroy either by wars, evil possession or just take away the minds in medical and environmental drugging.  The new era will arrive, my estimation has always been these stages; 1967 -2012----2013-2032 (2016 and 2017 key years)--2033-2075, there could be a 25 year delay.

Four more  shackisback.blogspot.com
posting about 15 or 17 August 2017
Posted by GEOFF FREED ONLINE at 11:42