Hello I know it might be boring and repetitious however I would like to explain a seeming contradiction.

Weather as a weapon23 mins
I know chemtrails again, and can you trust anonymous, in this case the evidence backs up the information. Ever since I have been blogging I have wondered about the weather and the strange skies that had been appearing, back then it was gradual, then through the grape vine I began to hear rumours, certainly from about 2009 I began blogging about chemtrails and in energygrid I inserted many a video and official interviews and questions asked by many senators and officials, then it went quite and the video above will explain why.
http://cecaust.com.au/releases/2015_05_14_Climate_Change_Galatic.html 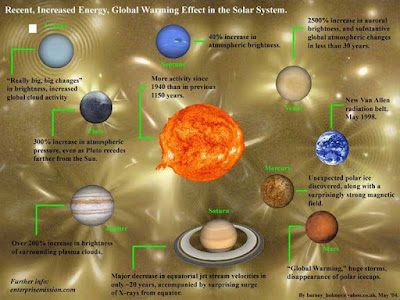 Courtesy Before its News

There is a suggestion that our pollution solely human made is blown by the solar wind from the sun to the planets causing them to have weather change, my view; a very big perhaps, even to the moon.
The first point in the seeming contradiction is that we have a natural cycle of Global Earth Warming as seen before in blogs 320 and so on. The second point is that we do have human made pollution in many forms from chemtrails, carbon emissions, weather control and much more, however I still feel the effect is between 6 and 10%, and this exacerbated because we have two weather systems in progress and process. One is the natural cycle of the solar system rotating around the Milky Way Black Hole Centre and the Earth's Wobble which is effecting the solar system planets and our local star the Sun.  The other is the pollution as in top video and those mentioned in the text. 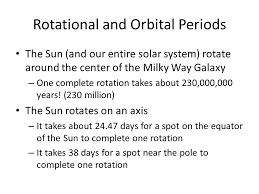 Courtesy Slide Player
There is a debate whether the 250 million years is correct I feel it is near enough. 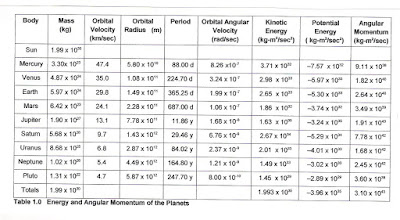 Courtesy Angelismarriti.it
Using the scales as above and the orbits and known revolving cycles one can calculate the orbits. This is also a clue to working out the binary and triple locks in the 1967 writings. 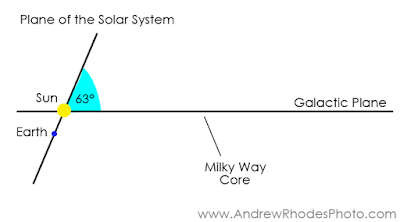 Courtesy AndrewRhodesphoto.wordpress.com.
Since the angles of the Earth and Sun to the Milky Way Centre the rotation axis and travel of the solar system is not a circular orbit as such

http://earthsky.org/astronomy-essentials/milky-way-rotation
You can see that with the ice drilling's and other research done I have come to the conclusion that this 'wipe out' is imminent and the next step in evolution is nigh however the madness described in the video above is a paramount issue to address.  To live on GM foods as a populace whilst those elite  live in luxury with food that is organic and life sustaining.

http://www.geofffreed.com/2013/04/post-25.html
Scroll down to where it says about tropical island and carry on to the end. It describes a TV play Gill and I wrote and then several domes and biospheres which are depicted. I feel that is a very likely scenario because of the madness, the sheer arrogant psychopathic maniacs who are messing with our world.  If you care to to add another
http://geofffreedarchive.blogspot.in/2005/05/
THE UFO STORY as above in which you can see we have been monitored in case these mad sociopaths use HAARP and similar weapons and blow up the Earth as in Anonymous Video at top. They have to be on alert ever since the early days and especially when you had the vimana and more in this article
http://blog.world-mysteries.com/science/ancient-weapons-of-mass-destruction-and-the-mahabharata/

So where do we go from here?; To fight insanity is tricky, the insanity of those who are supposed to be PH.D scientists(most scientists are not to be painted with the same brush) and responsible reasonably well educated politicians, medics and religious leaders would seem a hard task and to most nigh impossible. I do feel that a percolating consciousness is dripping into the collective unconscious by those who are awakened and those awakening the very horror of the world situation is jolting people to come out of the dream although the horror of it may drive some of them to despair and distraction. 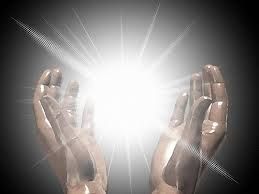 It will have to be a 'brave new world' of courage, perseverance, patience and calm assessments with quiet times of meditation and gatherings of like minded folks. Where am I in this? Brushing off the sleep from my eyes.
There is so much more and I will Post if anything else comes up.

Be ever so Well.

Geoff
I did mention in the long video by Nassim Haramein that as the Sun Defended Itself and the object was coming to Earth and as Nassim said we would have been toast and then something swept it away, so maybe ET or whoever or whatever will assist, although ET may not save humanity, this video of Nassim proves that ET or whoever were watching and saved the Earth as it would surely have been destroyed,  watch 'The day The Earth Stood Still' with Keanu Reeves and you might get the gist of a likely scenario, the old version was pretty good as well. My guess is that ET are urging humanity to get a strong group mind, hopefully millions of awakened humanity, not necessarily marching and protesting that is is important as long as it not violent, blogs if they are not taken down by the megalomaniacs frightened of their own power loss. If you believe it research the 'hundred monkey' 'tip over point', 'critical mass', Prigogine dissipative theory, this is why the madmen are destroying as many minds as possible reference video at top, the world epidemic of Alzheimer's and stupefying opiates
http://www.geofffreed.com/2013/03/post-10.html  read more of this and some of the '1967' writings.
http://www.geofffreed.com/search?q=robot+chicken
See how Chickens and Rabbits changed computer model
See the power of minds with Remote Viewing use search  bars, distant healing, placebo and so on. It can be done.
NOW IS THE TIME TO PROVE THAT MIND IS GREATER THAN MATERIALISM AND COMBINED THOUGHT AND MEDITATION AND LOVING INTENTIONISING CAN PREVAIL OVER TYRANNY AND EGO POWER.
Posted by GEOFF FREED ONLINE at 11:12