Hello Trusting you are well and thriving. I am going to take a break from Posting for a while.  By now one can see the repetitions of events, the fake news and counter demands, the wars, the political agendas and merely reporting the horrors or such like is highly negative and one can easily get sucked in. Where there is madness and insanity trying to alert people to madness and then getting through to the perpetrators to change their minds is like constantly coming up against a brick wall. We are brain washed whatever good or bad view, the problem is we do not want to admit it, or we are so ingrained and impacted, silted and rusted in and habitually attuned we are blinded by our habits, rituals and disciplines or the lack off and the media who no longer investigate but churn out mind stultifying garbage and send many of us into trance.

Furthermore whilst sharing my opinions I am approaching this perhaps from my brainwashing and my madness and are engaging with other madnesses or putting it milder, my programming and agendas are merely clashing with other programming and agendas.
Whilst everyone is or should be free to express their opinion it now becomes an argument and in some cases not allowed by law.

I am not so sure my agenda and programmes with opinion are right, correct or good, I assume I am right only because of my agendas and what right have I to judge another after all from birth we have been taught who we are and very few of us can venture outside the box.

That is why I am just going to rest and go back to my simple way of life style and perhaps become simple and maybe a chance to become a human being.

These wonders below are wonderful and that which produced them is where I shall be drawing inspiration of the planning and creativity of it all.
ROBOTS LAN ON ASTEROID RYUGU: This weekend, Japan made history by deploying two rovers on the surface of a near-Earth asteroid. The mechanical explorers dropped from their mothership, Hayabusa2, less than 100 meters above Ryugu, and now they are hopping across the space rock's cratered landscape. This picture was taken by Rover-1A in mid-hop: 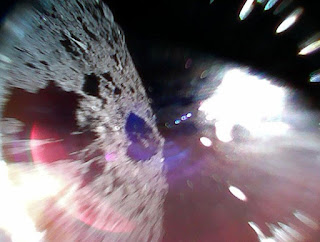 Hopping is necessary because the asteroid's gravity is too weak for simple rolling.  Instead of wheels, the rovers have rotating motors inside that allow them to shift their momentum and, thus, make little jumps across the asteroid's rugged surface. Mission controllers are taking great care that the rovers, which measure 18 cm by 7 cm and weigh only 1 kg, do not fly into space.


As historic as this achievement is, it is only the beginning: Rover-1A and 1B are on a reconnaissance mission for two more robots slated to land later this year.  In October, Hayabusa2 will release MASCOT (Mobile Asteroid Surface Scout), a larger lander made by the German Aerospace Center. MASCOT will be followed, in turn, by another Japanese robot. 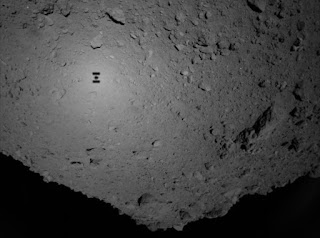 Above: Hayabasa2 photographs its own shadow on the asteroid. Credit: JAXA
Exploring Ryugu is important. Classified as a potentially hazardous asteroid, this 900-meter wide space rock can theoretically come closer to our planet than the Moon. This makes it a potential target for asteroid mining. Hayabasa2 will discover what valuable metals may be waiting there. Ryugu is also a very primitive body, possibly containing a chemical history of the formation of our solar system billions of years ago.
Launched in December 2014, Hayabusa2 reached asteroid Ryuga in June of this year. It is scheduled to orbit the asteroid for about a year and a half before returning to Earth in late 2020, carrying samples of Ryugu for analysis by researchers. Stay tuned for updates! (Courtesy www.spaceweather.com) 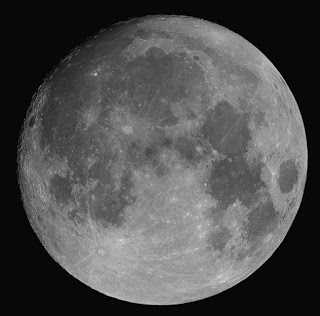 TONIGHT--THE HARVEST MOON: Tonight's full Moon has a special name--the Harvest Moon. It's the full moon closest to the northern autumnal equinox. In years past, farmers depended on the light of the Harvest Moon to gather ripening crops late into the night. Post-Edison, we appreciate it mainly for its beauty:

I took this picture last night from an agricultural field--quite appropriate for the Harvest Moon," says photographer Maximilian Teodorescu of . "The high-resolution version contains some incredible details."
There's more: The Harvest Moon behaves in a special way. Throughout the year the Moon rises, on average, about 50 minutes later each day. But near the autumnal equinox, this difference shrinks to only 30 minutes. The reason is, at the beginning of autumn the Moon's orbital path makes a narrow angle with the evening horizon.

To a non-astronomer, that might sound like celestial trivia. But to sky watchers it makes a huge difference. For several nights in a row around the time of the Harvest Moon, the Moon rises at about the same time--sunset.  And you know what happens when the Moon rises at sunset....
Low-hanging moons are magnified by the Moon illusion, a well-known but still mysterious trick of the eye that makes the Moon seem much larger than it really is. Tonight at sunset, you could see a giant Harvest Moon. Happy autumn--and enjoy the show!(Courtesy www.spaceweather.com) 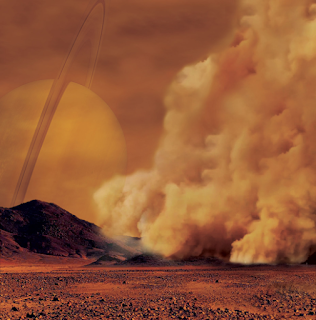 Above: An artist's concept of a dust storm on Titan. [more
SOLAR MINIMUM CONDITIONS ARE IN EFFECT: So far this year, the sun has been without sunspots for more than 154 days--including the last 12 days straight. To find a similar stretch of blank suns, you have to go back to 2009 when the sun was experiencing the deepest solar minimum in a century. Solar minimum has returned, bringing extra cosmic rays, long-lasting holes in the sun's atmosphere, and strangely pink auroras. Free: Aurora Alerts
DUST STORMS ON TITAN: In many ways, Saturn's largest Moon Titan is uncannily similar to Earth. It has lakes, seas, beaches, a thick atmosphere, rain, seasons. On Sept. 24th, researchers reporting the journal Nature Geoscience added one more item to the list: dust storms
The research team, led by French astronomer Sebastien Rodriguez of the Université Paris Diderot, found the storms in infrared images taken by NASA's Cassini spacecraft almost 10 years ago. At first the dust storms looked like clouds, but a closer look revealed their true nature: "[It was] dust raised from large dune fields around Titan's equator," says Rodriguez.
Dust on Titan is strange stuff. The research team believes it is made not of fine-grain sand, as dust would be on Earth. Instead, Titan's dust is organic, formed when organic molecules in the methane-rich atmosphere grow large enough to fall to the ground. Gusty winds pick those organic particles back up and blow them in choking clouds around the equator.
Some of the dust storms Cassini observed were so massive, they could only be lifted by very strong winds. This suggests that the underlying sand can be set in motion, too, and that the giant dunes covering Titan's equatorial regions are still active and continually changing. Read the original research here.(Courtesy www.spaceweathercom) EARTH'S MAGNETOSPHERE IS LEAKING: This week, geomagnetic activity has been low. There are no big holes in the sun's atmosphere nor any streams of high-speed solar wind lashing Earth's magnetic field. Nevertheless, Arctic sky watchers have witnessed some beautiful auroras. Why? Earth's magnetosphere is leaking. At this time of year, "equinox cracks" allow solar wind to penetrate our magnetic defenses, sparking Northern Lights without geomagnetic storms. Browse the aurora photo gallery for examples. Free: Aurora Alerts (Courtesy www.spaceweather.com)
With all the ingenuity of humankind and the billions and trillions spent on this and many other projects we cannot get world peace or save the Earth from rape, pillage, brutality, plunder and sacrilege and the barbaric acts of violence.

Some say this is meant to awaken us and some say it drives us further into depression, escape from horror into distraction and so on and I feel it is all because of programming, conditioning and brain washing and it starts in the womb.

Is there a way out----yes but one has to be still and examine ones thoughts in a non judgemental way and make notes of the feelings and where they emanate from and find that thoughts are the mind and when thoughts stop naturally in quiet moments another feeling of peace and joy and at one with the all and all ensues and then one realises that there is another consciousness and one has thoughts of a different nature and less often.

Then one realises that many of thoughts are nothing but a software installed from birth onwards.

I am still Posting in my writings at