Hello and welcome. 'Now you may think I am not in my right mind or am a sandwich short of a picnic or a piece missing from a jigsaw puzzle or a leggo piece missing of a mecano set however I will share it even if I get  howls or derision and Oh Geoff you have lost  it; in the vaccine there are nano particles and they are very similar to adjutants in the 'old vaccine technology' however at the moment as far as I can ascertain they are merely doing this function, although I do not trust it or the mRNA. The nano's are there to be upgraded' This came out out of the last blog 'Vaccine ingredients'

Subsequent to the above I got some rye and caustic comments and told me to get real and get 'fixed' however  I stand by this and hope to get my point across and as I have said many times this is my view and opinion and I could be way off target, I urge you to do your own research before it is taken down or censored, furthermore

I cannot stress how near this is and fast.
This was aired  in 2016 and the title of this video is 'Davos elite reveal Orwellian Plan to decode your brain and read your mind' This is not made up this is from their meeting.

·                        At the World Economic Forum’s 2016 meeting, panelists suggest that different ways of scanning the brain and brain mapping could be incorporated into the legal system and used by lawyers as part of trials, including against you

·                        If brain mapping became mainstream, it could have major applications applicable to the law, such that even if a person chooses not to confess, their brain could be tapped to do it for them

·                        There is currently no such thing as protection of “freedom of thought” the way there is protection for freedom of speech, and the notion of “mental privacy” isn’t even on the radar; yet, brain decoding technology is being slated for use against the public

“Everyone will wear them, because people have shown that they’re quite willing to give up privacy for convenience;” a prototype could be here in the next decade

Davos is a city in , known as much for its excellent skiing as it is for hosting the World Economic Forum (WEF) annual meeting. The meeting is formally described as “the most creative force for engaging the world's top leaders in collaborative activities to shape the global, regional and industry agendas at the beginning of each year.”1

This elite oligarchy, however, is behind a technocratic plan to govern society through technology, programmed by scientists and technicians and automated through the use of artificial intelligence, rather than through democratically elected politicians and government leaders. The video above shows snippets of the World Economic Forum’s 2016 meeting, with narrative by Truthstream Media.2

It’s compared to the meetings of the secretive Bilderberg Group, created by Prince Bernhard of The Netherlands in 1954 to “foster dialogue between Europe and North America,”3 but unlike Bilderberg meetings — the details of which are not made public, but which have reportedly referred to protestors as “cockroaches”4 — WEF is an open forum that may be filmed and released to the public.

This particular discussion, therefore, is eerily polite, but that doesn’t make its content any less chilling. (me;nano particles are the interface between yourself and technology Smart Stuff)

Scientists Scheming How to Use Your Own Thoughts Against You. Courtesy Mercola.com

This is again a warning by a very mainstream person and is very much to the point.
Can you join the dots and see where we are heading?; 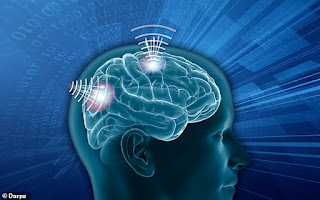 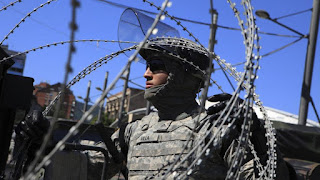 Now I suggest that the nano particles in the vaccine can be tweaked to use as a communication device as above and furthermore to communicate your thoughts so as to process a terrorist or group of persons before it occurs. Of course a full trans-humanist would have implants as in the last POST, this will all come about when the Smart Meters, Smart Phones and 5 / 6G are fully installed world wide and a net of doom spread over humanity whilst in the making, ONCE FULLY Installed OUR BRAINS WILL ONE WITH THE NET and we will be robotised and probably oblivious to any other thoughts and certainly not our own. We will be part of the collective like the;

These implants can help many people and like most things they have two sides, one to heal and help and another to control and pry.
Now to come back to some 50 or sixty POSTS ago and my insistence and obstinacy; I stated out in 1970 giving talks and workshops and yes dare I say of a new era, yes a New Age, this came about through knowledge that came to me in 1967 and was received at Samye Ling and states that we are moving into the Aquarian Era and it is based on the five extinctions and moving into the 6th one occurring right now. It states a new race of humans akin from Homo Erectus to Homo Sapien to the new evolving Homo Energetica / Spiritulana would come about naturally by the series of incoming Cosmic Energies and Frequency's and that there is no need for technological interference and attempts to better nature.
http://geofffreedarchive.blogspot.com taken from my contributions from a large late energygrid magazine and salvaged from when the editor decided to shut it down and many contributors lost their articles and so just a few remained that I got out and in this one and the archives you can trace the journey from 1967 to 2020 so far. One of the briefs I was given was to find scientific evidence for this natural cyclic change and those who wish to hold back natural evolution, NOT science that went hand in glove with nature and natural evolution, that was to be encouraged. So I put it to you ah la natural or ah la implants and GMO and brain frying microwaves. For me I feel that all this technocracy is about control and the inflated psychopathic ego, an ego of a few who are paranoiac sociopaths and blown up by their own inflated importance, they are ultra materialistic and although this is judgemental and I am just as adamant as they are in my point of view and have opened up a dichotomy I never the less feel driven as they are. I hope and pray we may even come to a point of reconciliation and forgiveness and I certainly hope that my ego learns to accept that I may be entirely wrong and that I am working from intuition, research and education rather than blind bias.

The Greatest Hoax Ever Perpetuated on an Unsuspecting Public

German Lawyers Gear Up to Expose the Hoax

All this and more in link belowPart of link below
The Russian Officer refers to Zionists these are not be confused with Jewish people alone there are those who believe in Zion as a way of restoring a spiritual (not religious or magic ) to a compassionate and sharing world.

Darren Rodwell, executive member for housing at London Councils, said: “Homelessness rates are skyrocketing and faces the most severe crisis in the country.

“These figures are a clear wake-up call that more must be done to tackle homelessness. Although the economic turmoil and job losses brought about by Covid-19 have undoubtedly made the situation worse, with more and more Londoners turning to their council for help, there’s been an upward trend in London’s homelessness rates for many years now.

This is a world wide problem and this has become worse as the lock downs and social restrictions have caused mass unemployment, homes repossessed and then homelessness and when you look at many so called affluent countries the streets of homelessness look like tent cities in refugee and asylum seekers domains. How sad and lonely these dear folk seem and the cost of their sanity and trust especially the children.

This I reported way back in the summer and the strange pre and posts events that proceeded this affair. The link below shows the damage and video but much more that can be told and again howls of conspiracy when the full facts come out, but this I will leave for another time. So I will leave you with the 'official narrative for now.
If you care to read my  POST Wednesday 26th August 2020 'Another View OF The Plot 4' and scroll down there is more to the above.  I can give a clue to a really astounding event played down till now and a NASA cover up;

A car-sized asteroid made the closest Earth flyby a space rock has ever survived (me; it was  massive,  really massive)

The first tie was severed on the dish on the 6th.August 2020 in strange circumstances, the fly by was on the 10th August 2020 and then the other 'Listening Posts' came back after the 10th and was not reported until the 16th August 2020 and had to do with Cosmonaut Ivan Vagner filming from the ISS, there is more at another time. A little distraction from Hoax Covid.

With the introduction of the mRNA it opens the door to a vast manipulation of the DNA by laser and the 'Phantom Wave Effect' and the was demonstrated by Professor Peter Garieav when by the information from a wave frequency was implanted in another egg from a from a salamander to a frog and the frog egg  became a salamander. The transhumanists have the ability through mass harvesting of your DNA through these useless PCR tests which they know are useless but they want the mass DNA if they can get it. THAT IN my view is the use of these useless tests to MAKE  near world population DNA bank and in the activation of your mRNA vaccine it give an open door to communicate with the 5G / 6G network and monitor your DNA and alter it to their liking. A very good read on another aspect of this in a healing way is Dr Bruce Lipton and the 'Biology of Beliefs' and this maybe a way of offsetting the Eugenic Technocracy meddling with our DNA. ITS ALL IN THE MIND. Thoughts and intentions can influence your DNA . Proper meditation can reset over time the DNA to 'factory settings or natural default, back to the makers handbook so to speak'.

BE MINDFUL AND BE WELL

People with a "significant history of allergic reactions" should not be given the Pfizer/BioNTech coronavirus vaccine, UK health authorities said Wednesday, after two healthcare workers had symptoms after receiving a shot the day before.

Posted by GEOFF FREED ONLINE at 06:47