Hello and a warm greeting to you.  I suppose in this world we live in at present we all have a hope and help to achieve it.  Sometimes hope seems a far prospect and help sometimes comes at a cost. Well below are a few selections, a kind of display of things and subjects world wide. 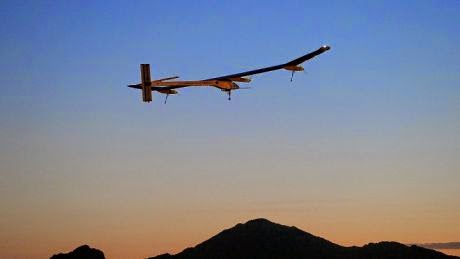 The Solar Impulse has a wingspan comparable to a Boeing 747, but weighs only as much as a car (AP)

A Swiss solar-powered plane has taken off from Abu Dhabi at the start of the first ever attempt to fly around the world without using a drop of fuel.
Solar Impulse founder Andre Borschberg was at the controls of the single-seater when it took off from the Al Bateen Executive Airport.
Mr Borschberg will swap piloting duties with Solar Impulse co-founder Bertrand Piccard during stop-overs.
The Swiss pilots say their aim is to create awareness about replacing "old polluting technologies with clean and efficient technologies."
The plane is expected to reach its first destination - Muscat, Oman - after about 10 hours of flight.
Some legs of the trip, such as over the Pacific and Atlantic oceans, will mean five or six straight days of flying solo.
The lightweight Solar Impulse 2, a larger version of a single-seat prototype that first flew five years ago, is made of carbon fibre and has 17,248 solar cells built into the wing that supply the plane with renewable energy. The solar cells recharge four lithium polymer batteries.
The company says the plane has a 236ft wingspan, larger than that of a Boeing 747, but only weighs about as much as a car at around 5,070 lbs.
The plane in June made an inaugural flight of two hours and 17 minutes above western Switzerland, just two months after it was unveiled last year.
After Oman, the plane will head to India, where it will make two stops, then to China and Burma before heading across the Pacific and stopping in Hawaii.
Then it will head to Phoenix, Arizona, and New York's biggest airport, John F Kennedy International. The path across the Atlantic will depend on the weather and could include a stop in southern Europe or Morocco before ending in Abu Dhabi.
The two pilots are expected to return to Abu Dhabi in late July or even August.
Mr Borschberg and Mr Piccard say they want to push politicians, celebrities and private citizens to "confront the Conference on Climate Change of the United Nations, which will define the new Kyoto protocol in December 2015 in Paris".
Solar Impulse supporter Prince Albert of Monaco was present at the Monaco control centrr during take-off.
The UAE-based Masdar, the Abu Dhabi government's clean-energy company, is a key sponsor of the flight.
Additional sponsors include Omega, Google and Moet Hennessey, among others.

Whistle Blowers.  4 mins
More on the above and important. 1hr.5mins   Edward Snowden
Bill Gates The Death Experiment 15 mins
Italians show how to deflate terror.4 mins
Ukraine women really lays into the fray. 2 mins
THEY ARE WATCHING US. OK at first you may bulk at this longish video. however, when you get into it, it is very good, one of the reasons for this it was done some years back and a lot of references to the ancient texts and modern day sightings. 1hr. 22 mins
http://www.disclose.tv/action/viewvideo/199243/dead_alien_bodies_from_roswell_ufo_crash/?utm_medium=email&utm_campaign=digest-2015-12&ut  10 mins see what you make of this?  Make up your mind time.
3 mins of an alien stone found at Roswell recently.
RFID 666 HUMAN BRANDING AND ENSLAVEMENT HAS BEGUN 20 Mins.
During the time I did my UFO story and investigations in the early 70's I came across certain people who had been micro chipped, however it was crude. Some of them were so 'called' abducted yet under hypnosis it was found to be men in black' but very human.  Those who attended my UFO wokshops will verify the pictures and stories. One was the mysterious case in South Wales with a  old Volvo car and a cliff face. Another a women in Northumbria who was followed for days and visited by an army major and questioned and threatened as she found the chip and had it removed by a friend who was a vet. They have been experimenting and building up as the technology has got micro / nano.  If a non chipped person wants to access things, they could cut your hand off and do it, there are a number of films with this on already, they be Hollywood but they like a lots of science fiction can be relevant or a hint of things to come.
Government admits working with ET. 23 mins.
Wikimedia sue NSA. 5 mins
https://youtu.be/RLQ-8f5D-yM
11 PART SERIES ON CANCER CURES, DOCTORS, SURVIVORS AND SO ON.
NASA MMS Mission.  5Mins.  Important because magnetic reconnection can influence many things including Human Biology. At last they may say something.
The Science of Reconnection  4 mins.
Moritz The Clever Pig. 1 min
Secret Police Detention in the USA. 4 mins
WARNING I DO NOT LIKE THE EU, HOWEVER THEY ARE A BETTER OPTION IN MY VIEW IF UK COME OUT OF IT----AT LEAST WE HAVE A SEMBLANCE OF HUMAN RIGHTS.
IF BILDERBERG UPPER CLASS CAME INTO POWER AND ALIGNED WITH THE USA THE ABOVE IS WHAT WE COULD EXPECT. THE POLICE HERE ARE ALREADY FEELING THEIR MIGHT AND THE GREAT BRITISH FAIRNESSAND JUSTICE IS BEING ERODED.
YOU WILL ALL RFID RED CHIP IN 2017 . 2 mins
Cern Alert  Black Holes, Other Dimensions. 10 mins.  I was writing and lecturing about this in 1969. More in a later Post.
Wolf and Grizzly Bear cub play. 3 mins  Shame nations, religions and cults can't do this.  When young and innocent it seems we may become more friendly.
Bear and tiger cubs. 4 mins.
THE GREAT WALL OF PLASMA: Amateur astronomers around the world are monitoring a spectacular prominence emerging over the sun's eastern limb. Sergio Castillo of Corona, CA, calls it "the Great Wall of Plasma," and here's why: The vast structure is more than 6x taller and 30x wider than Earth. In other words, it could swallow our entire planet more than 180 times. Bill Hrudey sends this picture from the Cayman Islands: 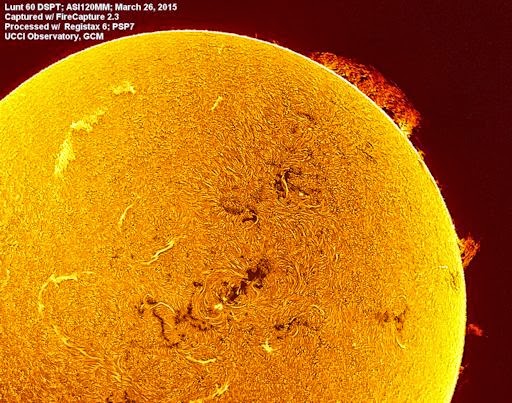 "It's a solar imager's delight," says Hrudey.
This is a type of prominence commonly called a "hedgerow prominence." Hot glowing plasma inside the structure is held aloft by quasi-stable solar magnetic fields. NASA and Japanese space telescopes have taken high resolution images of of similar prominences and seen some amazing things such as (1) tadpole-shaped plumes that float up from the base of the prominence; (2) narrow streams of plasma that descend from the top like waterfalls; and (3) swirls and vortices that resemble van Gogh's Starry Night.( Courtesy spaceweather.com)
https://www.accessnow.org/blog/2015/03/23/human-rights-left-out-of-sight-in-uks-new-surveillance-guidelines
I am convinced this is a USA/UK ARRANGEMENT for whatever the NSA AND GCHQ  trawl and that's everything then we have no privacy different to what other countries are introducing, there is a light in some places. NO WONDER THE Cameron sheeple wants out of EU and lose our human rights completely and join the dictatorship of the USA.
Crimalized for being homeless-----there is a light here. 23 mins.
THIS IS ANOTHER CRAZY THING---because you are homeless or the in the UK disabled or cannot get work, then in the USA you can be locked up and in  the UK get your benefits cut.  THEY NEVER ADDRESS THE CAUSE JUST THE SYMPTOM. SOUNDS LIKE SOME MEDICAL PROCEDURES.
In my view the cause is not so much get more jobs, yes that would help, the real cause is a few have the wealth and utilities and they control a population of near surfs, beggars, poverty and so cause fear. YES GET A JOB IN THE ARMED FORCES, POLICE AND LAW ENFORCEMENT.  That means one could become callous, uncaring and hard,. Well you have seen the wars, atrocities and the masters who encourage and plan it.

Skin and Bone ---are they being harvested in Ukraine and indeed other war zones.  Organ transplants are big business, especially for the very wealthy who want to live forever. 11 mins.
Total Eclipse of the Moon on April 4 2015. With all these eclipses.it is said to be esoterically speaking a very set of significant omens and symbols.
Let's hope a New Moon precedes a deep New Way of Compassion and Endearment to our Beautiful Home---Mother Earth and to all her residents she feeds and sustains.
Be Well Geoff
Posted by GEOFF FREED ONLINE at 09:24