A hearty welcome. I often wondered when looking up at the sky and the miracle of the stars, moon and planets why I felt so elated.
Condolences and loving healing thoughts and prayers to those who passed over in Brussels.  Loving prayers of comforts to the families and friends. 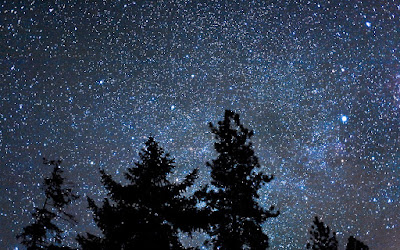 Courtesy astraliesthemes.tumbir.com
I remember the feeling as I laid on the roof of a landrover in the desert and looked up at the stars , it was silent getting chilly and as stared almost hypnotised, I lost sense of my body and I seemed to go into the starry vault.  The feeling has never left me, it was pure and simple meditation, no sense of body, just a deep physical and mental absence of stimulus. A sense of awe and peace prevailed. I felt I was inside a immense mind, a beautiful mind so full of joy that it expressed itself in beauty and prolific abundance. Courtesy GoogleImages
I felt I had been blessed and this was a blessing and grace.  I felt that this was God's mind and this was the Divine overflowing with joy and sharing it with all that felt and imbibed it. I felt that our minds were in sync with the Supreme Mind if we but dropped our cares and worries even the midst of turmoil and the gift was to surrender our personal local issues and we would be lifted in consciousness. 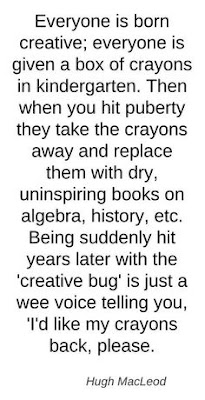 Courtesy pinterest.com
The experience above and many similar experiences in nature and in meditation and in meditation when all the thoughts went away, seem to just subside on their own, especially when I was caught up in a stream of thoughts and then they seemed so loud and intrusive and without trying to stem the flow, stop the racing or slow moving clouds of thought, they seem to sense their own noise and cacophony, and voluntarily as it were ceased in a gentle slide down in volume to serenity. I felt then I was blessed and grace filled me and an inexplicable joy which sometimes brought tears, then a deep sigh and a smile. 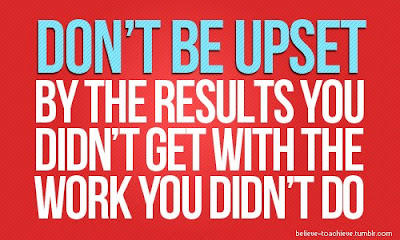 Courtesy tremendouslifebooks.wordpress.com
I was never ambitious and I tried to work as best as possible but the NDE at the age of 4, with meditation and having two Teachers one from Japan and the other Chinese and they were monks in Western Clothing or at times in their robes, then physics especially the atomic stuff from early age, then a time as an electrician, forensic technician, footballer and then workshop / counselling, healing and so on, romantic relationships, you know the journey through life. I made a lot of money at one time, got bored became an angry bigoted person.  All the time running in the back ground was this theme, a silent stalker. 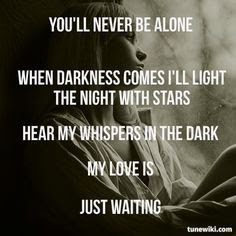 Courtesy www.pinterest.com
I felt loved by an all encompassing energy, a kind of grace and joy that loved me without any judgement, a really unconditional love. Yes with all my girlfriends, my lovely Mother and family I felt loved but with all of us we have the human condition and there was never a complete love and I feel that none of us can do this in a flesh body or indeed when we pass beyond until we merge and surrender with the All and All Mind.
I have found that those and myself once that 'fall utterly and deeply and adoringly in love' with another is not the same. We can become needy and self interested in that and exclude others and when we part through demise or something, we are left bereft and broken, a few rare relationships are the exception. 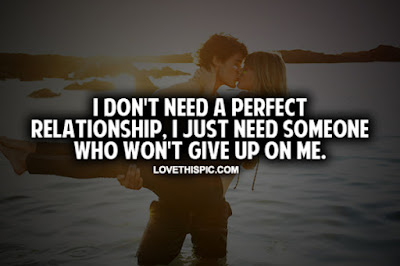 Courtesy www.lovethispic.com
I can remember a few times when I faced a deadly situation either financial doom, a serious health issue and other things if I managed to quieten my mind with its racing thoughts and its diagnosis of health issues, debt, death in a horrible way, disablement, then on a few occasions there has been a dramatic turn about a spontaneous remission.  This was preceded by that grace, the cessation of thought, it was like the image above, whatever that grace, that inner calm and knowing is, whatever I have done and berated myself over or felt guilty, or hurt someone or myself, IT DID'NT give up on me. Mind you after that I forgave others and myself if needed and beforehand I felt to do so. So for that was and is the perfect relationship.  Surrendering to calm mind. 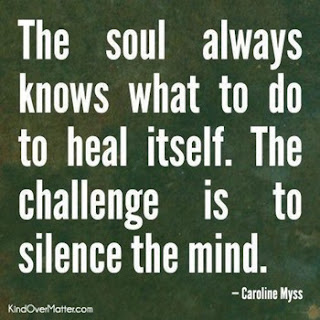 Courtesy CarolynMyss
So in a way I was spoilt by the NDE in 1942, I knew of the love feeling from that, and so I always wanted to be in that state again, my journey through life was to have all the experiences and get lost in them and then always a silent nagging stream at the back of my mind silently whispering, a sweetness of feeling akin to a beautiful aroma and beckoning me home.
Then the battle of the programmed ego and conditioning brain washing, NO be not fooled, there is no God, no afterlife or if there is there is only hell, look at the wars, earthquakes, droughts, weather, old age, disease, poverty and some lucky bastards who have it all, the warmongers, how can there be a loving God, and besides who created him, the priests who rape, the evil bastards who murder, pillage torture, you must be kidding. 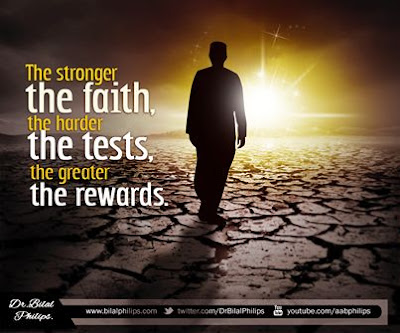 Courtesy www.pinterest.com
So for me the act of surrender from that mind as described above, the ego versus the quiet graceful mind is the purpose for my life here and now as I grow into my later years I see I have been through this 'theatre of War' and that the moment I dropped the war bit, the fight and realised I am not strong enough, clever enough, there are no solutions to the problem of my hurricane of negative thoughts, my gushing emotions, my neediness, and some friends and well meaning folk can temporarily give me relief or support and I come back to ' let it go' and somehow even if in pain there is an assurance that 'all is well' and all this is temporary and when the 'time' is right I shall return home.  You might say I am fooling myself and that the brain produces the hormones, the dopamine to just give me a lift and that the 'grace and calm' are the brains 'survival mechanism' and it is self induced by the sheer terror of the situation. 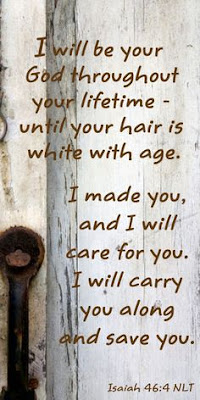 Courtesy www.pinterest.com
Of course there are those that say the NDE is a brain function of survival and there are cancer persons that a few days or weeks seem to go into remission and feel great and then die and it is said the mid / brain / body connection does this as a function to ease the suffering and go into the best optimal survival mode. OK so be it, then if so and I am fooling myself to believe through experience and not blind belief, then whom do I trust? No God or Supreme Mind, just a brain that evolves itself and when exhausted ceases to be, dies and there is blank oblivion. Then the Universe should die as well, and maybe it is and I feel I am part of that and not apart from that, so I stand by my belief through a very tangible and strong loving feeling I am as Isaiah states ' cared for' and if I am wrong or right I shall find out on my demise and so will you dearest reader. 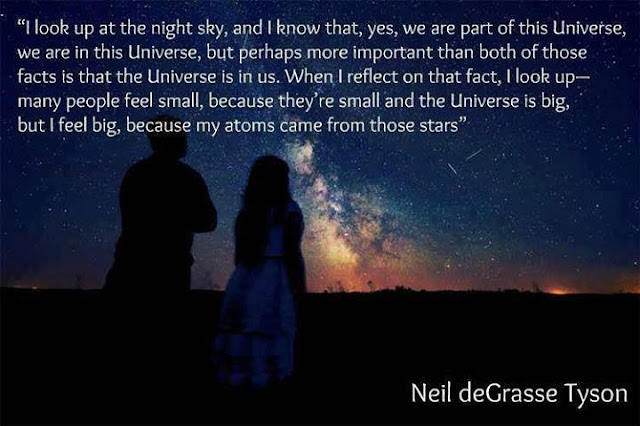 maximizingmetacognition.wordpress.com
The feeling I get that I feel oneness, neither big or small, just enough is sufficient.  I am enough. 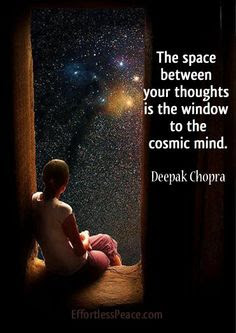 Courtesy www.pinterest. com
There is an expression 'mind the gap' and was taken from the London Underground and the platform irregularity, so you did not fall in there was that notice. I felt it very apt to meditation. That gap is the grace and calm. 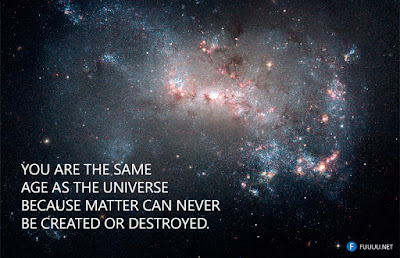 That which created matter is consciousness, it appears solid because of the programming we receive when we are born, matter is an experience of the mind which believes it is solid.  Because consciousness has not matter in Itself, it is said to be empty, yet it is a dynamic.  What can destroy emptiness, like the bubble appears to be real, the mind is focussed on it which gives it its reality and sense of solidness, when the bubble bursts what remains, the space it came from. 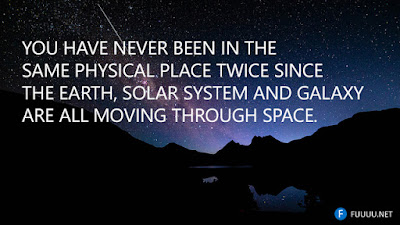 Just as our thoughts race through the 'space of mind' we have the habit of returning to the same thoughts, we may modify them, however we are always reincarnating ourselves, reinventing the wheel and although we facelift them, never the less they are old tat, a cosmetic job at the most.  However the Universe moves on as well and also incarnates Itself and reinvents the Galaxies, Stars and so on. We are at one there as well.  However we have to expand to that scale to appreciate where it originates from and return too. 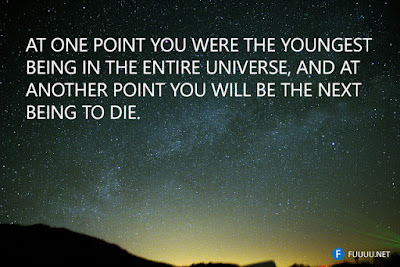 So the cycle of life carries on and to break these incarnations maybe we have to find the gap, the space between them, and maybe that's where Life pops out from and returns. The midpoint between duality and opposites.  It is the swing between the two that creates matter.(Three images above thanks to www.fuuuu.net)
Amazing demonstration of Ki / Chi by Japanese Doctor. 10 mis.
http://www.davidwolfe.com/master-controls-animals-chi/
Perhaps a better video with interviewer and Doctor. 10 mins as above, courtesy of the link above.
More about Chi. 1 hr.
CIA ILLUMINATI TV MIND CONTROL. 10 MINS
IN 2007 ONWARDS I HAVE GIVEN OUT DIAGRAMS AND TEXTS, VIDEOS AND ALERTS ON THE ABOVE.  BELIEVE ME IT IS WAY BEYOND MY EARLY WARNINGS NOW AND THE DIAGRAMS WHICH WERE ELECTRONICS AND BLACK HELICOPTERS ARE STILL USED BUT IN MORE SOPHISTICATED WAYS. PLEASE MEDITATE WHILST YOU CAN BEFORE OUR BRAINS CANNOT COPE WITH THE OVERLOAD WHICH IS CAUSING A KIND OF FATIGUE AND OVERWHELM.  USE THE SHORT BREAKS AS RECOMMENDED IN LAST BLOG AND DO INTERVAL STUFF AS IT BREAKS UP THE CONTINUAL BOMBARDMENT OF :-
GMO FOODS
CELL / MOBILE PHONES
CHEMTRAILS
NEWSPAPER AND INTERNET COMPUTER STUFF
WE FI
ADDITIVES AND PRESERVATIVES IN FOOD
NOISE AND LOUD BEAT DISRUPTIVE MUSIC
HORROR VIDEOS AND COMPUTER GAMES
NEGATIVE CHAT BY NEIGHBOURS AND FRIENDS
MEDICAL DRUGS(ONLY FOR IMMEDIATE THREAT AND ILLNESS)
RECREATIONAL DRUGS
PORNOGRAPHY AND VIOLENT TV
EMOTIONAL SOAPS ON TV
HUMAN RIGHTS AND POVERTY(AUSTERITY MEASURES)
THESE MAKE UP A PART OF THE 'CONTINUAL LOOP' THE RUNNING COMMENTARY THAT FEEDS THE INTERNAL DIALOGUE FEAR CENTRE AND CAUSES A CONSTANT LOW LEVEL 'FLIGHT FIGHT' ADRENALIN SURGE, A LOW LEVEL UNABLE TO RELAX SYNDROME, RESTLESS SLEEP, LEADING TO SNACKING, AND ESCAPISM. SO BREAK UP THE DAY WITH THE STRETCHING, YAWNING AND SO ON, JUST A MINUTE OR TWO WILL HELP.
HAPPY YAWNING AND CARESSING YOURSELF.
BE EVERY WELL.  GEOFF ALL OF THOSE BRAIN WASHED IN THE 60'S  AS IN VIDEO ABOVE AND MORE OF IT SINCE ARE THE CITIZENS WHO ARE ASLEEP.  BY PROPER MINDFULNESS ONE WATCHES AND SENSES THE FALSE MESSAGES IMPLANTED DEEP IN THE MIND / BRAIN. 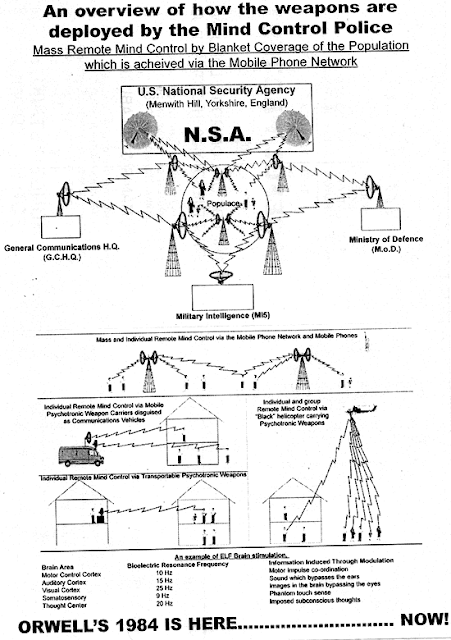 HOW MUCH MORE ADVANCED NOW WITH DIGITAL, SATELLITE,CCTV, DRONES, HACKING AND SNOOPING ALL BEING LINKED TO ONE UNIT AS IT WERE AND NETWORK.  THE TERMINATOR FILMS WERE A PRE WARNING. SEE Y STUFF ON  TRANSHUMANISM AND SO ON.

Posted by GEOFF FREED ONLINE at 05:19