Hi some of these ideas have been discussed and posted and some are ----well make up your mind time?  Greetings to what maybe a puzzle to most---who am I?, what is my purpose? how did the Universe come into being? ----and who the hell cares anyway----the world is polluted------there is no one to save us and again----who the so and so cares anyway?  Well I do.
Mind Blowing theories about the Universe. 12 mins.
I like theory number 1. I have Posted this many times that so called Junk DNA is a coded part of the DNA and will be triggered when the energies, frequencies and signals trigger their wakening like the seeds and flowers and some animals that are in hibernation and wait the right temperatures.seasons and environmental convenience.  The 1967 writings are all about this. .
MORE MYSTERIES.  12 mins 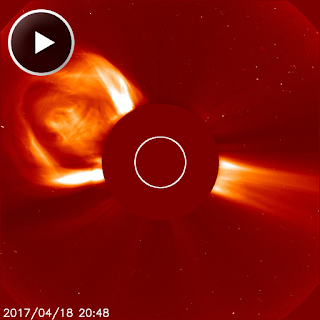 Massive CME(CORONAL MASS  EJECTION)
Old sunspot AR2644 has returned--and it is still active. On April 18th at approximately 2000 UT, the sunspot's magnetic canopy exploded and hurled a bright coronal mass ejection (CME) into space. The ESA/NASA Solar and Heliophysics Observatory caught the cloud as it raced away from the sun:(Courtesy spaceweather.com)

A few aspects concern me; will the judges be bribed when Monsanto appeals, will some judges be warned, threatened and killed to stop further cases like these, will Monsanto and other corporations just ignore the verdict IF CEETA gets its way then these rulings become null and void, like TTIP the corporation can sue a Government if it loses lucrative business even if it is environmentally harmful. Furthermore with President Trump ignoring environmental safety in favor of trade and money then there is a problem.

More horror and intrigue. 20 mins
Tuck and humor. 6 mins
http://www.healthfreedoms.org/unique-experiment-reveals-elephants-have-much-more-self-conscious-awareness-then-already-thought/
Reinventing the wheel again-----all life is self awareness just some are not adapted by Life to be like humans for variety of Life is what makes the creative Universe so beautiful and imaginative.  The same jigsaw puzzle over and over again-------one would crave for change.  There was StarTrek episode in which every inhabitant wore a mask of a different kind----when they removed their masks they all had identical faces.
Dutch Whistle Blower ---wow---13 mins
More info by this amazing site.  9 mins
In contrast to the Dutch Whistle blower one officer gets his due. 2 mins
1) The Earth is our Mother, care for her.2) Honor your ancestors through your actions.3) Open your heart and soul to the Great Spirit.4) All life is sacred; treat all beings with respect.5) Take from the Earth what is needed and nothing more.6) Put the good of all before your own interests.7) Give constant thanks for each new day.8) Speak the truth; but only of good in others.9) Follow the rhythms of nature; rise and retire with the sun.10) Enjoy life's journey, but leave no tracks.
THE WORLD MAP IS NOT WHAT YOU THINK. 6 mins
BECAUSE OF THE SPHERE THAT THE WORLD IS THE ROUNDNESS HAS A SURPRISE IN THE SIZE.
Marine le Penn has a right go at Angelica Merkel.  2 mins.
Have a look at Hollande's face at the side--he looks crappy.
2 mins
HEY IS THIS RELEVANT TO PRESIDENT TRUMP? 4 mins
Skulls mystery. 7 mins
RARE VIDEO OF BLUE WHALE FEEDING.
APPARENTLY WHEN HUMP BACK WHALES DEFAECATE IT HELPS TO OXYGENATE THE OCEANS AND SO WE OWE THEM A GREAT DEAL---SEE SOURCE IN NATIONAL GEOGRAPHIC.