Dear Readers I apologise for all the information and some of it technical and some you have seen before. This is Courtesy of spaceweather.com. By now you will have my own interpretation of these radiations and frequencies this is just as it comes without my own views accept to say; this is not good for our planet or us, and note the fact about chemical effects.
There will also be four shackisback,blogspot.com (some browsers.co.uk)

Readers, thank you for your patience while we continue to develop this new section of Spaceweather.com. We've been working to streamline our data reduction, allowing us to post results from balloon flights much more rapidly, and we have developed a new data product, shown here: 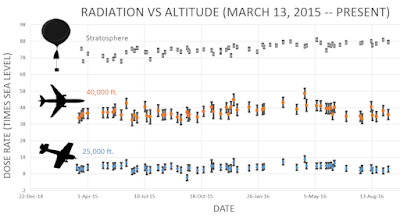 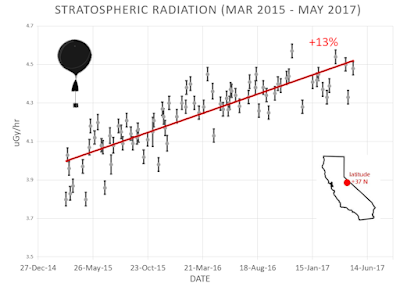 Why are cosmic rays intensifying? The main reason is the sun. Solar storm clouds such as coronal mass ejections (CMEs) sweep aside cosmic rays when they pass by Earth. During Solar Maximum, CMEs are abundant and cosmic rays are held at bay. Now, however, the solar cycle is swinging toward Solar Minimum, allowing cosmic rays to return. Another reason could be the weakening of Earth's magnetic field, which helps protect us from deep-space radiation.
The radiation sensors onboard our helium balloons detect X-rays and gamma-rays in the energy range 10 keV to 20 MeV. These energies span the range of medical X-ray machines and airport security scanners.
The data points in the graph above correspond to the peak of the Reneger-Pfotzer maximum, which lies about 67,000 feet above central California. When cosmic rays crash into Earth's atmosphere, they produce a spray of secondary particles that is most intense at the entrance to the stratosphere. Physicists Eric Reneger and Georg Pfotzer discovered the maximum using balloons in the 1930and it is what we are measuring todays 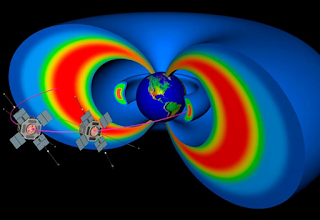 Co-author Phil Erickson of MIT's Haystack Observatory explains: "As Van Allen discovered in the 1950s and 1960s, there are two radiation belts surrounding Earth with a 'slot' between them. Our research is focused on the the outer radiation belt, which contains electrons with energies of a million or more electron-volts. These 'killer electrons' have the potential to damage spacecraft, even causing permanent failures."
During strong geomagnetic storms, the outer radiation belt expands, causing the killer electrons to approach Earth. But NASA's Van Allen Probes, a pair of spacecraft sent to explore the radiation belts, found that something was stopping the particles from getting too close.

"The penetration of the outer belt stopped right at the same place as the edge of VLF strong transmissions from humans on the ground," says Erickson. "These VLF transmissions penetrate seawater, so we use them to communicate with submarines. They also propagate upward along Earth's magnetic field lines, forming a 'bubble' of VLF waves that reaches out to about 2.8 Earth-radii--the same spot where the ultra-relativistic electrons seem to stop. 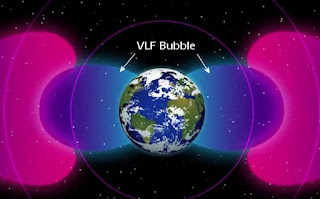 VLF radio waves clear the area of killer electrons "via a wave-particle gyro-resonance," says Erickson. Essentially, they are just the right frequency to scatter the particles away from our planet."Because powerful VLF transmitters have been operating since before the dawn of the Space Age, it is possible that we have never observed the radiation belts in their pristine, unperturbed state," notes John Foster, a colleague of Erickson at MIT and an early leader of this research.Other anthropogenic effects on space weather include artificial radiation belts created by nuclear tests, high-frequency wave heating of the ionosphere, and cavities in Earth's magnetotail formed by chemical release experiments. Download the complete paper here.


FROM HERE ABOVE UNDERLINED I HAVE COPIED THE LOT. IT IS MAINLY COMPOSED OF AUTHORS AND DATA, HOWEVER THE ABSTRACT IS VITAL.

BE WELL. GEOFF
Posted by GEOFF FREED ONLINE at 04:56