Hello Folks What can I say. The worlds getting smaller in many ways, the media, the internet, the cell / mobile networks, new technologies and of course sharing in one to one communication, fashion and massive pop concerts and huge sporting events.
SOLAR MINIMUM IS A TERRIBLE TIME TO BLOW UP A SATELLITE: Note to space powers: If you're going to blow a satellite to bits, solar minimum is a terrible time to do it. is grappling with this important truth today as debris from their March 27th anti-satellite weapons test spreads through space. As many as 6,500 pieces of the Microsat-R Earth observation satellite are now circling Earth, according to a simulation created by Analytical Graphics Inc.:
During solar minimum--happening now!--Earth's upper atmosphere cools and contracts, sharply reducing aerodynamic drag that causes satellites to decay. Indeed, in 2019 the temperature of the thermosphere is close to a Space Age record low. This could double or triple the time required for fragments of the shattered satellite to sink into the atmosphere and disintegrate. Small fragments in high orbits may remain aloft for years, circling the planet like tiny bullets traveling 17,000 mph.
This event brings to mind a Chinese ASAT test in 2007, which also occurred near solar minimum and created a significant debris field of more than 35,000 pieces. That test occured at an altitude of 865 km, with particles ultimately spreading between 200 km and 4000 km. At least one Russian satellite was unintentionally damaged by the debris.
https://youtu.be/Pzhtc-rFbvM 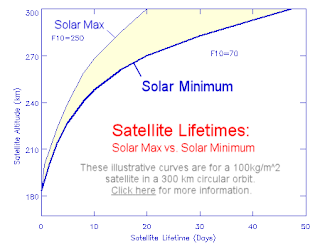 Article and images Courtesy  www.spaceweather.com
's test at 300 km altitude has created an upward spray of debris that could threaten the International Space Station only 100 km overhead, according to statements made by NASA Administrator Jim Bridenstine during an April 1st town hall meeting in .
"That is a terrible, terrible thing, to create an event that sends debris in an apogee that goes above the International Space Station," he told NASA employees.
Officials say there are 60 trackable fragments of Microsat-R measuring 10 cm across or larger. Of that total, 24 ended up in orbits with high points, or apogees, above the 400 km altitude of the ISS. Low solar activity, which could last for years as the solar cycle ponderously swings through its minimum phase, will help keep these fragments aloft, prolonging their threat to other satellites.

Spirit is not a deity with human whims, moods, jealousies, and temper tantrums. Spirit does not ask you to sacrifice your first born child, or slay infidels, or destroy cities when their citizens have lost their way. Spirit is the creative matrix that keeps the cosmos evolving and renewing itself.


Stick with this ---there are graphics---beyond is sense

This one really rips," he says. "I recommend listening with headphones. It is a stereo recording with 20 MHz in one channel and 25 MHz in the other."
How does a sunspot make radio waves? It starts with a solar flare. Beams of electrons accelerated by flares slice through the sun's atmosphere, creating a ripple of plasma waves and radio static detectable on Earth 93 million miles away. Astronomers classify solar radio bursts into five types; Ashcraft's recording captured a mixture of Type III and Type V.
And something else... Ashcraft has been recording solar radio bursts for many years. Yesterday he picked up something new. "In the dynamic spectrum, note the 'feathery' upward drifting radio emissions," he says. "I've never seen anything like that--not even during solar maximum. This is auspicious and rare activity to be happening during the deepest time of solar minimum."
Readers, if you would like to detect solar radio bursts in your own backyard, order a radio telescope kit from NASA's RadioJOVE project.(Courtesy www.spaceweather.com )

Barrie Trower On 5G: There Is No Safe Place, No Where To Go
Please let as many people know of the dangers above.


That and the Cosmic stuff coming in at the low Sun Cycle plus the GMO FOOD, chemtrails and so on, how much can the human immune stand before it is seriously compromised.

Please make this available to as many folk as possible.  Thanks

Could many terrorists attacks, shootings, knifing's as well as drug induced be responsible for this, induced frequency crime?
Could the sleeping public be duped and subtle frequencies be embedded in the TV, Radio, computer, smart meter and so on?

Many Hollywood movies give clues as to the future I have mentioned so many in particular 'The terminator series and chemtrails / Skynet 'and the Bourne series and real life interviews with a super soldier all in the back blogs and Posts.

Then there is the series I did on transhumanism and bioengineering.