A great warm Welcome. Here in the UK we face an election and it hoped that this will solve the Brexit issue. There are some great videos and some interesting science and technocracy and how I prophesied so much of this in the 60's, some of the those who attended my lectures, workshops and friendly visits who walked out on me and said; conspiracy, imaginative masturbatory stuff, kinky and approval seeking, some of these now nearing my age and above (I was 81 years young last November) have sent me notes they took and some even have the later leaflets. 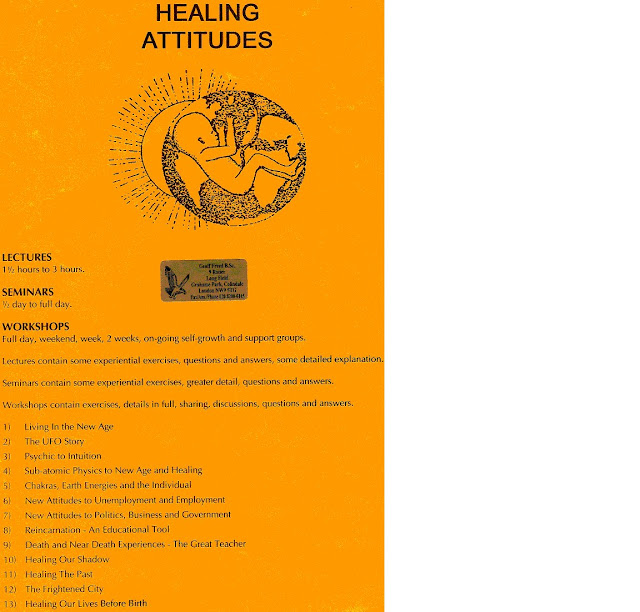 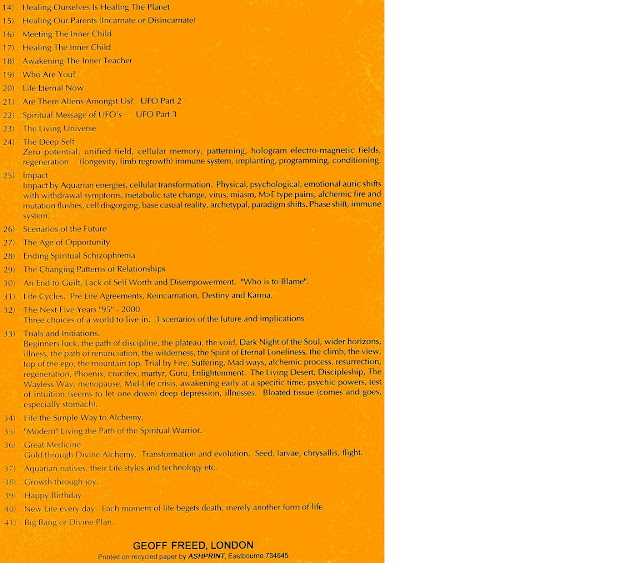 THIS LEAFLET WAS PRINTED IN THE LATE 7O'S
You can tell the date by the telephone number it was before the STD  codes. I no longer live at the address on the leaflet at top.

There is much more to this than meets the eye as it were, see this video below for more on this from a different angle.

This is a vital and empowering video.

This is another view of Starlink.  Think on my articles on the internet of everything and the Smart Technology.

This is about Astronomers concern about the satellites making the sky light so to make astronomy difficult and some satellites have shiny metal surfaces which makes the telescopes less penetrative.

On another tack so to speak it makes observations for UFO  and celestial phenomena more obscure. Chemtrails, HAARP and other sky accumulations from Earth to Sky and vice versa makes a concerning  point to consider and I wonder what NASA has to say about launching as more private corporations want to send satellites to space albeit low orbit perhaps. With space junk and satellites its a mine field up there. So maybe NASA will send rockets or maybe the so called rockets maybe a cover for sending astronauts another way through the hints I have given by wormhole / stargate / black hole technology or back engineered UFO craft Earth made or friendly ET?.

Much the same as above.

Way back in my early blogs in the late magazine energygrid I did a series of articles on hydrocephalus and an article in;

https://science.sciencemag.org/content/210/4475/1232?maxtoshow=&HITS=10&hits=10    with the startling headline 'is the brain really necessary?' and then I went into the Universe as a hologram and should this be recognised then connective-ness, that a seamless interconnected interrelated  Universe can be accepted or at least contemplated.


Male sperm; according to many sources male sperm in humans  are declining. Many reasons are given; pollution, chemtrails, EMF radiation, stress, lack of exercise and chemical food such as additives, hormones, junk food and lack of exercise or the wrong kind of exercise, too much exercise and too much heat read the benefit of cold showering.


This is about AI migrating into health care and of course robots taking over surgery and AI self learning and its implications; should robots get too smart will humans be needed says Atlas !!!???

He is out of date see below this was way back
Now look and this, it is not the latest.


More about Robotics and Technocracy spreading into our every day lives, it is not so much the fact that some people see endless servants who never sleep or need pay or food, perhaps with a little maintenance but the redundancy from work and with millions out of work some schemes have been put forward about a minimum universal pension or with chemtrails, vaccines, GMO foods, 5G and now 6G in the wings will the human race be culled to a manageable level or sent to the Moon and Mars (some say there are already colonies there see Dark Journalist and the interviews by Camelot) and some elite's who do not want non human transplants or become part cyborg, have healthy humans farmed for their spare parts.


Seemingly to the more mundane it would seem the fate of Jeffrey Epstein and the hounding of Prince Andrew of late in the UK press seems to press for an in depth look at the history of the these goings on; As a former forensic person I followed long before my employment some historical cases; I started with the;
https://www.britannica.com/event/Profumo-affair  I would have been 24 and I was at a Home Office Establishment and knew the cover up's and then the exposure and even then there was a Russian implication, then this led to a cover up by Leon Brittan and Margaret Thatcher about missing files which only surfaced about five years ago when they were dead, this may have revealed  the Jimmy Saville debacle and then the purge that followed with the BBC involved in a cover up and some Royalty were hinted. Leon Brittan was allegedly involved in a child abuse ring in Brussels with the involvement by the Royalty in Belgium and all of this led to cases like; Huntley a sex predator who slipped through the net with allegedly help from high up officials that he was black mailing and so on, I could go on and on, the Pizza Gate, the Bush's and Clinton's and I found links to all of them, a world wide net that goes all around the world. It is sickening and now in the UK they are waiting for the deaths of well known military and political persons to die before the exposures can come to light.
Many of those above received huge compensations for being so called innocent and bought off the judiciary who are in it as well(of course not all of them)whilst the victims were bullied and told they were liars and just after fame and money(and of course a few were).

How long will it take to get to consciousness, I have written, lectured and presented so many workshops on it and I quote a famous scientist on it (by the way just read the quotes of Einstein, Plank, Heisenberg, Bohr and so on);

The stream of knowledge is heading towards a non-mechanical reality; the Universe begins to look more like a great thought than like a great machine. Mind no longer appears to be an accidental intruder into the realm of matter... we ought rather hail it as the creator and governor of the realm of matter.
— James Jeans in The Mysterious Universe, [14]

What remains is in any case very different from the full-blooded matter and the forbidding materialism of the Victorian scientist. His objective and material universe is proved to consist of little more than constructs of our own minds. To this extent, then, modern physics has moved in the direction of philosophic idealism. Mind and matter, if not proved to be of similar nature, are at least found to be ingredients of one single system. There is no longer room for the kind of dualism which has haunted philosophy since the days of Descartes.
— James Jeans, addressing the British Association in 1934, recorded in Physics and Philosophy, [15]

Finite picture whose dimensions are a certain amount of space and a certain amount of time; the protons and electrons are the streaks of paint which define the picture against its space-time background. Traveling as far back in time as we can, brings us not to the creation of the picture, but to its edge; the creation of the picture lies as much outside the picture as the artist is outside his canvas. On this view, discussing the creation of the universe in terms of time and space is like trying to discover the artist and the action of painting, by going to the edge of the canvas. This brings us very near to those philosophical systems which regard the universe as a thought in the mind of its Creator, thereby reducing all discussion of material creation to futility.
— James Jeans in The Universe Around Us, [16]

COSMIC RAYS ARE INTENSIFYING: Cosmic rays have been intensifying for more than 4 years. This weekend they surged within a percentage point of the Space Age record, according to data from neutron counters at the 's Cosmic Ray Station in :
The reason for this increase is Solar Minimum--underway now. During Solar Minimum, the sun's magnetic field weakens, allowing more energetic particles from deep space to penetrate the solar system. The current Solar Minimum is one of the deepest (perhaps the deepest) of the past century. Increases in cosmic rays are to be expected. The only question is, how high will they go? You can monitor daily neutron counts right here on Spaceweather.com.
To find out if the radiation surge is being felt at mid-latitudes, yesterday Spaceweather.com and the students of Earth to Sky Calculus launched a cosmic ray balloon to the stratosphere over central Calfinornai.

SPACE WEATHER BALLOON DATA: Approximately once a week, Spaceweather.com and the students of Earth to Sky Calculus fly space weather balloons to the stratosphere over . These balloons are equipped with radiation sensors that detect cosmic rays, a surprisingly "down to Earth" form of space weather. Cosmic rays can seed clouds, trigger lightning, and penetrate commercial airplanes. Furthermore, there are studies ( #1, #2, #3, #4) linking cosmic rays with cardiac arrhythmias and sudden cardiac death in the general population. Our latest measurements show that cosmic rays are intensifying, with an increase of more than 18% since 2015:

The radiation sensors onboard our helium balloons detect X-rays and gamma-rays in the energy range 10 keV to 20 MeV. These energies span the range of medical X-ray machines and airport security scanners.
Why are cosmic rays intensifying? The main reason is the sun. Solar storm clouds such as coronal mass ejections (CMEs) sweep aside cosmic rays when they pass by Earth. During Solar Maximum, CMEs are abundant and cosmic rays are held at bay. Now, however, the solar cycle is swinging toward Solar Minimum, allowing cosmic rays to return. Another reason could be the weakening of Earth's magnetic field, which helps protect us from deep-space radiation.

To return to the Space weather as above and to remind one of the true facts about climate change and the possibility of a sixth extinction. Of course we humans are responsible for some climate change however there are a number of natural cycles as well, this is all covered throughout the site, especially from POST 370 on wards.

There are more articles of prose, poems, philosophy, koans and stuff on (Shack is one of my many nicknames)
www.shackisback.blogspot.com
Posted by GEOFF FREED ONLINE at 08:46