Hello and welcome. In previous and copious POST's I have gone into the effects of the Sun and the Cosmic Rays. These is a natural 11 year low and high Sun cycles, it is the duration and intensity that is unique to each cycle. By now you will have read the biological implications; such as sudden spontaneous heart attacks, arrhythmia's and other physical presentations. Research will tell you more and the implications in DNA and other systems. I have covered these for many years now.


COSMIC RAY UPDATE: Something ironic is happening in Earth's atmosphere. Solar activity is low--very low. Yet atmospheric radiation is heading in the opposite direction. Cosmic rays percolating through the air around us are at a 5 year high. Take a look at these data gathered by cosmic ray balloons launched by Spaceweather.com and the students of Earth to Sky Calculus almost we 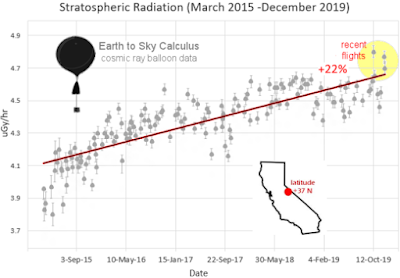 Radiation levels have been increasing almost non-stop since the monitoring program began, with recent flights registering the highest levels of all. What's happening? The answer is "Solar Minimum"--the low point of the 11-year solar cycle. During Solar Minimum (underway now) the sun's magnetic field weakens and allows energetic particles from deep space to penetrate the Solar System. As solar activity goes down, cosmic rays go up; yin-yang. When cosmic rays hit the top of Earth's atmosphere, they produce a spray of secondary particles and photons that rain down on Earth's surface. This is what our balloons measure--the secondary spray. We use X-ray and gamma-ray detectors sensitive to energies in the range 10 keV to 20 MeV. This type of radiation, which you can also find in medical X-ray machines and airport security scanners, has increased more than 20% in the stratosphere. 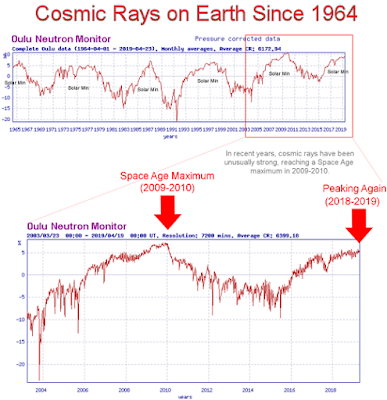 Another way to measure cosmic rays is using a neutron monitor. Neutrons are an important type of secondary cosmic ray. They reach Earth's surface with relative ease and are biologically effective. Neutron monitors at the Sodankyla Geophysical Observatory in , are getting results similar to ours. data show that cosmic rays have been increasing for the past 5 years and, moreover, are within percentage points of the Space Age record.
The Space Age record for cosmic rays isn't very old. It was was set in late 2009-early 2010 near the end of a very deep Solar Minimum much like the one we're experiencing now. As 2019 comes to a close, neutron counts at are approaching those same levels. Indeed, a new record could be just weeks or months away.
Who cares? Anyone who steps on an airplane. Cosmic rays penetrate commercial jets, delivering whole-body dosages equal to one or more dental X-rays even on regular flights across the . Cosmic rays pose an even greater hazard to astronauts, of course. Cosmic rays can also alter the electro-chemistry of Earth's upper atmosphere and are thought to play some role in sparking lightning. Stay tuned for updates. COURTESY SPACEWEATHER .COM May I add any comments I make on these data are mine and spaceweather.com and I have no contact. 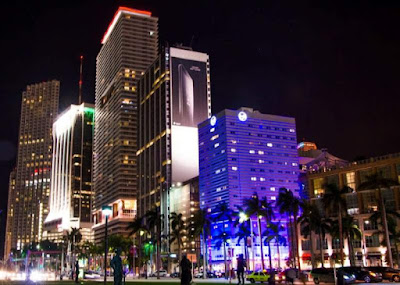 
A city in has confirmed hackers seeking to extort money were responsible for crippling its computer systems earlier this week.
But officials in have yet to decide whether they will pay a reported $1 million ransom.
If they do opt to fork over the money, they may have to dip into city coffers; the city of about 52,000 in ’s Panhandle – whose annual budget is roughly $245 million – is not insured for such an attack.
Obtaining it in the future is “something that our risk manager will certainly be looking into,” said city spokeswoman Kaycee Lagarde.
$7.5bn
The potential cost of cyber attacks on US government agencies
Ms Lagarde confirmed that ransomware was behind the attack that brought down the city’s computer network over the weekend, less than a day after a Saudi aviation student killed three US sailors and wounded eight other people at a nearby naval air station.
The FBI has said the attacks were not connected.
The cyber security blog BleepingComputer reported earlier this week that a group behind a ransomware strain known as Maze claimed responsibility for the attack and was demanding $1 million from the city.
In emails exchanged with the website, the Maze hackers claimed they had stolen documents from the city but did not say whether they had given officials a deadline to pay for them or if they had threatened to release the documents if they did not pay.
Bleeping Computer editor Lawrence Abrams said the Maze operators had authenticated their identity with proof of a different hack and by posting snippets of email exchanges with his blog on a dark-web payment site.
In May, a cyber attack hobbled ’s computer network and cost the city more than $18m to repair
City officials declined to discuss who might have been responsible or any ransom amount demanded. The city said it has restored some services, including email, phone services and utility online bill payments.
Ransomware infections reached epidemic dimensions this year, and security researchers are concerned ransomware could also disrupt next year’s presidential elections.
According to a report released this week by the cyber security firm Emsisoft, almost a thousand government agencies, educational institutions and health care providers were hit in an unprecedented barrage at a potential cost of more than $7.5bn.
’s largest hospital system and the city of are among the most recent ransomware victims.
In May, a cyber attack hobbled ’s computer network and cost the city more than $18m to repair. City officials refused to pay demands for $76,000 in bitcoin.
During the summer, two cities – and – paid hackers more than $1 million combined after being targeted.
officials became aware of the cyber attack against their city about last Saturday.
Ever since, information technology technicians have been working to restore services as officials continued to take stock of the damage, if any, and determine what information might have been compromised or stolen.
Ms Lagarde would not say whether any personal or financial data was breached. She said the city would notify residents and customers as warranted.
This is what can happen with all this computerisation and just think when Smart Cities and the driver-less cars and all gadgets in the home and business are joined to one large internet of everything and the bleating manufacturer's and bosses of large corporation giving you assurances it is Hack Proof and encrypted, this only makes the Hackers even more determined to rise to the challenge and make money into the bargain. All coming from Smart Meters and Smart Technology. Technocracy is becoming too Smart Ass.
I like David Wilcock but sometimes he doesn't deliver, I understand that with these matters things get delayed, you are hounded by those who are sceptics, the deep state and jealous competitors and the media who just slay anything their political masters do not like.
This is about Pete Peterson's death bed confession and the strange death of Woody another top person. David's book  'The Source Field Investigations' is amazing and brilliant, if you want to know anything about the leading cutting edge of science this is the go to book, even though it is outstanding things have moved on and as you can see from my back POSTS at an astounding rate.
I know I keep on about ET and UFO's but I know and here come the howls, the baying sceptics all crying come out with your source's, your whistle blowers, I reply if I reveal them they will be prosecuted or  the sceptics reply, shame on you, you are a fake and bullshitter and just after publicity or making up for a sad life.
However I have POSTED about off world travels and bases on the Moon and Mars and elsewhere. OK its up to you. By the way David gets real abuse.
I do not get donations and would not accept them, I have a small readership, I am not recognised by the 'big guns' in these fields I POST about and have contacted the top sites and they do not even reply and yet I notice some of my 'stuff' is almost word for word printed. I do not mind this, if shared and I do not depend on anyone's approval for me or my work.
5G AND CO.

Posted by GEOFF FREED ONLINE at 11:15