Welcome. This is another in the 392 series and classed as urgent!!!? Below we see the weather patterns changing and it seems that human behaviour can often reflect the climate. Sensitive people in sensory deprivation chambers can often sense weather changes whilst in a darkened windowless chambers;
https://www.geofffreed.com/search?q=Geomagnetic+storms


SURFING THE JET STREAM REDUCES AVIATION RADIATION: Something strange is happening in the . For the past three years, airplanes have been flying across the ocean in record time. Credit the jet stream. It's revved up, possibly by climate change, and planes that surf it are flying faster than ever before. The latest record was set just days ago. On , British Airways Flight 112 (BA 112) rocketed from to in a mere 4 hours 56 minutes, at one point traveling faster than 825 mph.
This is good news, because airplanes surfing the jet stream absorb significantly less cosmic radiation. 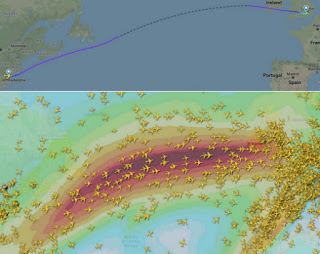 Researchers have long known that air travelers are exposed to cosmic rays. At typical cruising
altitudes, passengers absorb 50 to 100 times more radiation than they would at sea level. This has led the International Commission on Radiological Protection (ICRP) to classify pilots and flight attendants as occupational radiation workers.
The jet stream can reduce this exposure. By propelling the passengers of BA 112 across the at record speed, the jet stream lowered their dose by about 30%. Two Virgin Atlantic flights following close behind the British Airways Boeing 747 experienced similar reductions.
These conclusions are based on E-RAD, a new model for aviation radiation. Since 2015, we (Spaceweather.com and the students of Earth to Sky Calculus) have been collecting X-ray, gamma-ray, and neutron radiation data onboard airplanes. Our database contains more than 25,000 radiation measurements over 27 countries, 5 continents, and 2 oceans. E-RAD uses these measurements to predict dose rates on flights anywhere in the world. 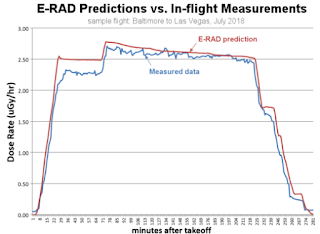 British Airways flies from to every day. We applied E-RAD to Flight 112 on several dates, comparing dosages on Feb. 8th, when the plane surfed the jet stream, to nearby dates when it didn’t. Surfing the jet stream shaved uSv (microSieverts) off the total radiation dose, a reduction equivalent to about 1 dental X-ray.
It’s not all good news, though. The jet stream can cause trouble. An active, fast-moving jet stream is often filled with turbulence, making flights miserable for buckled-in passengers. Planes dodging the rough air can actually increase their flight times, boosting cosmic ray exposure instead of reducing it.
Oh, and did you want to go home? Passengers returning to from have to cross the  against the jet stream. Their flights will be slower, increasing exposure time. Indeed, we calculated the radiation exposure for British Airways flight 177 on Feb 8th, which flew in the opposite direction, from to . Passengers onboard that aircraft received double the dosage: 34.4 uSv ( to ) instead of the 17.7 uSv ( to ) received by passengers on the BA 112 flight earlier in the day.
Climate change research suggests that all of these effects will intensify in the years ahead. A seminal study in 2016 found that changes in atmospheric dynamics would increase round-trip times between and despite the quickening jet stream. Unless you fly to  and remain there, you’re going to absorb more and more rads on a plane.
A sharable version of this story with more information is available here 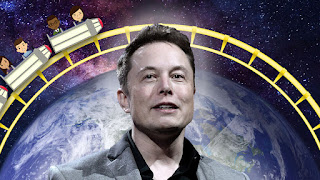 NEW IAU STATEMENT ON SATELLITE MEGA-CONSTELLATIONS: The night sky is in danger. This has been true for years as urban landscapes became increasingly light-polluted. But now there's a new threat, one you can't escape by driving into the countryside. It's the "mega-constellation." Companies are planning to launch tens of thousands of internet satellites into low-Earth orbit. The recent launch of just 240 SpaceX Starlink satellites has already ruined many astronomical observations. 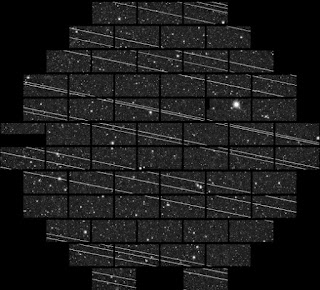 Above: Astronomers at the Cerro Tololo Inter-American Observatory were trying to photograph nearby galaxies when 19 Starlink satellites intervened. [Full Story]

This week the International Astronomical Union (IAU) issued a new press release describing the impact of satellite mega-constellations on astronomy. IAU astronomers simulated 25,000 satellites similar in type to the satellites of SpaceX, Amazon, and OneWeb, and here are their results:

1. The number of satellites above the horizon at any given time would be between ~1500 and a few thousand. Most will appear very close to the horizon, with only a relative few passing directly overhead.
2. When the sun is 18 degrees below the horizon--that is, when the night becomes dark--the number of illuminated satellites above the horizon would be around 1000. These numbers will decrease during the hours around when many satellites fall into Earth's shadow.
3. At the moment it is difficult to predict how many of the illuminated satellites will be visible to the naked eye because of uncertainties in their reflectivity. Probably, the vast majority will be too faint to see. This depends to some degree on experiments such as those being carried out by SpaceX to reduce the reflectivity of their satellites with different coatings. 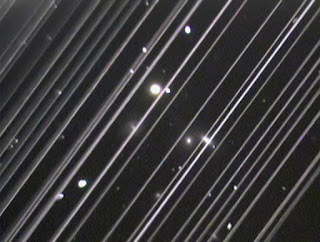 Above: Starlink satellites photobomb the NGC 5353/4 galaxy group at Lowell Observatory [more]
4. Even if most satellites are invisible to the naked eye, mega-constellations pose a serious problem for professional astronomy. The trails of these satellites are bright enough to saturate modern detectors on large telescopes, and wide-field scientific astronomical observations will be severely affected.
5. The Vera C. Rubin Observatory currently under construction in will be particularly hard-hit. The innovative observatory will scan large swaths of the sky, looking for near-Earth asteroids, studying dark energy, and much more. According to the IAU, up to 30% of the 30-second images during twilight hours will be affected. In theory, the effects of the new satellites could be mitigated by accurately predicting their orbits and interrupting observations, when necessary, during their passage, but this is a burdensome procedure.
There are no international rules governing the brightness of orbiting manmade objects. Until now, they didn't seem to be necessary. Mega-constellations, however, threaten "the uncontaminated view of the night sky from dark places, which should be considered a non-renounceable world human heritage," says the press release. Therefore the IAU will present its findings at meetings of the UN Committee for Peaceful Uses of Outer Space, bringing the attention of this problem to world leaders.  (Courtesy spaceweather.com)

It is very important to protect our skies; we do not know exactly what they are putting up there and what they contain and their alleged purpose. For years governments and other 'authorities, Institution's and establishments' denied chemtrails so being forewarned is perhaps diligent. 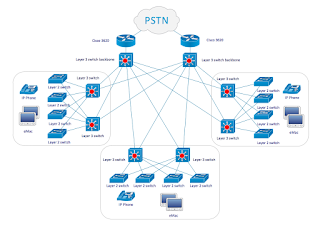 This video above is important; originally Public Switched Telephone Network (PSTN) was developed for analogue landline telephone systems, the video goes into the 'switches, layers and signals' it is very clearly voiced and demonstrated, now the systems in almost every place is digitalis-ed. 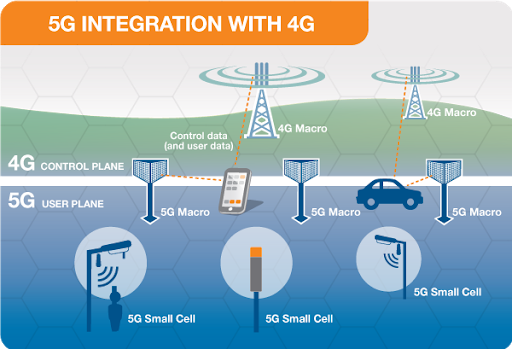 Here it is seen that 4G and 5G are kind of in tandem and can boost each and also the PSTN will and is already linked into the networks and will facilitate the image below. 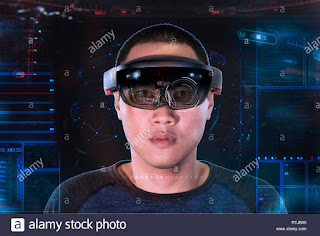 Courtesy  Alamy
In the image above it is Alamy who I am grateful for this image and a play on words for the goggle it might be a pun and be Alarming. In back POSTS I explained that several sensitive and perhaps some vulnerable people may get 'hooked and addicted' and lose their sense of reality (which is questionable as we have all been brainwashed from birth as explained and we are all someone else's hand me down culture, politic, religion, cultural  preference and many of us never question who are we in essence?) and it will be like in the film 'The Matrix' never knowing who you might be unless in the film one unplugs oneself, here one needs less appliances and technical gadgets and reflects and meditates. (as if so many of us especially youngsters are already hooked on cell / mobile phones, surfing the net and other numerous items) Courtesy Mibidev
Physically and biologically one's brain will be in the cranium  and the skull space will be one's own but the brain contents in regards to what you think and are as said before are usually parental and peer hand me downs NOW however they can be 'THE DEEP STATE BIG BROTHER'S' hand me down and thought behavioural brainwashed or rather beamed in broadcasts no longer needing implants just straight frequency transference to the magnetite natural crystals in the body and brain and so became the sole property human flesh robots to the powers that are and to  be.

Then the powers to be maybe usurped by AI robots who decide at first humans are frail, emotional and lacking in so many attributes that the robots have; longevity, do not need food or oxygen, climate no bother and so on, at first they may tolerate us and then are we needed at at all, some scientists think we can 'marry' ourselves into cyborg human and the robots may feel this a hybrid form and so away with you hybrid. 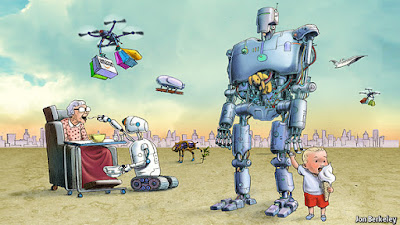 Courtesy The Economist
Well the economy might be less worrisome in the image supplied by the economist with robots that self service themselves free of charge and as above their living costs such as laundry, hospitals, travel, wages, food, sleep, wear and tear and so on minimal. So is this a possibility?; well the scientists who are in love with technology and especially utter control and dominance who may have the emotionless quality of their network supremacy may overtake the religions, cultures and politicians and go for their own agendas which we see being worked out NOW. 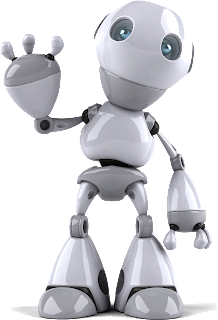 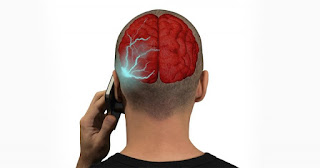 Longterm mobile phone use can cause brain tumours, one of 's highest courts has confirmed.
It upheld a ruling that a man had developed acoustic neuroma, a benign tumour of the head, as a direct consequence of using a mobile phone for long periods.
Judges at the Court of Appeal in said they reviewed all the scientific studies and concluded that there was "strong evidence" that EMF (electro-magnetic field) frequencies from a mobile phone could cause the cancer.
It's the second time an Italian court has ruled that mobile phones can cause cancer. A 2010 ruling in favour of an Italian worker was upheld two years later by the country's supreme court.
In the latest ruling, the appeal court judges noted it was difficult to find good independent research that hadn't been funded by the mobile phone industry. These clear conflicts of interest should be highlighted from the offset, the judges said, and that less weight should be given to them.
References
(Source: www.phonegatealert,org; )

Posted by GEOFF FREED ONLINE at 06:45