Greetings. I take science and interpret my findings according to my brief in the 1967 writings and the prophesies therein and although I may be at odds with the scientific explanation it fits to my theorems. Agreed my POSTS and previous blogs in the Archives maybe to some be just propositions, hypothesis, postulates, assumptions, wacky thesis or just lunatic crazy ego fantasies, never the less I feel to do them.
A MAGNETIC EXPLOSION ON EARTH'S DOORSTEP: Yes, there are explosions in Earth’s magnetic field. They happen all the time. Gusts of solar wind press against Earth’s magnetosphere, squeezing lines of magnetic force together. The lines criss-cross and reconnect, literally exploding and propelling high energy particles toward Earth.  are the afterglow of this process.
On , such an explosion occurred closer to Earth than anyone had seen before.  It has taken researchers 4 years to fully wrap their minds around what happened, and the results were published just this week in the , edition of Nature Physics 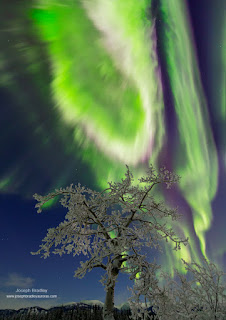 Above:  sparked by a near-Earth magnetic explosion on : more
Lead author Vassilis Angelopoulos of UCLA explains: "Usually, these explosions happen at least 100,000 miles from Earth, far downstream in our planet’s magnetic tail. On , however, we observed a reconnection event only 30,000 miles away–more than 3 times closer than normal."
It was a case of good luck and perfect timing. NASA's swarm of three THEMIS spacecraft were passing through the area, and they were able to pinpoint the explosion’s location "right on the doorstep" of the geosynchronous satellite belt. This showed reconnection events may pose a previously overlooked threat to Earth-orbiting satellites. The nearby blast caused a strong G2-class geomagnetic storm and intense auroras around the . 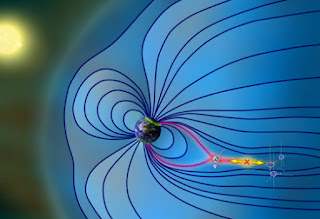 Above: "X" marks the spot of the , near-Earth magnetic explosion: more.

Angelopoulos estimated the energy involved. "The explosion and subsequent storm delivered as much as ~88 PetaJoules (88 x 1015 Joules) of energy to the near-Earth environment. That’s more than 10 times the energy of the largest nuclear bomb and about 20 times the energy of a magnitude 7 earthquake."
Before this event, many researchers felt that reconnection at such proximity was impossible. Earth’s nearby magnetic field was too stable for such explosions … or so the thinking went.
"Now we know better," Angelopoulos says"“The THEMIS multipoint observations are iron-clad. It really happened, and this is going to make a big impact on future studies of geomagnetic storms."
A sharable version of this story may be found here. ( Courtesy spaceweather.com and authors)


Post 381 Sunday September 2019 (which does a synopsis of the 5 extinctions as well) as mentioning Themis along Archives 3rd March and June 2009 with some Themis and Nassim Haramein and some interesting Sun information;


http://geofffreedarchive.blogspot.com  (these articles or blog were taken out from the late energygrid magazine which was a large edition with many contributors, many of the archives of this of mine were saved but videos out of date or deplatformed and images lost). 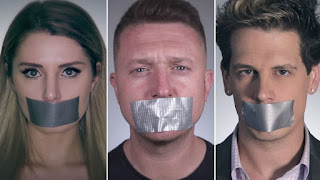 Getting back to the information regarding Themis and the lead scientist involved describes in the March 3 2009 describes his and others astonishment of the Themis and other findings. This gave rise to my take on Portals, Stargates, Wormholes and Black holes and my inter dimensional studies, ET and UFO. 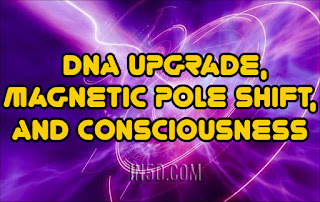 In the 'Archive' days that was from 1970 by lecture and workshops then 2005 to 2013 (still workshops and lectures) then onto energygrid it was all about Ascension, electron volts, DNA change and the subjects mentioned in the image and the special information about the Sun, then I got into the messy world of conspiracies and subjects that threatened to dumb down and destroy brains so that the Ascension process would be either defeated or delayed.
The above lead article at the top proves to me the Universe is closing in to give the Earth and humanity more energetic new intensity energies in order to raise consciousness and the DNA profile, plus the increasing gamma rays that are occurring during the solar low cycles as in back Posts and the biological effects on all organic systems.
Sun stuff starts at approximately 5hrs in.

Here Nassim gives the theory I have worked on; the Sun is travelling at 3000 miles per second and the planets spiral around the Sun on this journey and we are never in the same space as before. On this journey we are not only experiencing differing energies and modifying, upgrading and re-configuring but our DNA  and evolution is increasing, the Technocrats want to stop or alter this natural process by technological means;eugenics, transhumanism, cyborgs, social engineering, AI, 5G, internet of everything,  robotisation and other monstrosities.


As much as admire Nassim he lost me in the above image after the Sun Stuff and planets. However I got into a howler of condemnation over the years in blog and POST. The realisation that the Universe grows like in a way AI it learns by feedback loops that modifies and upgrades, each unit or node is an intelligent receiver and transmitter of information and it shares its findings and is then circulated and each node is able to sift and sort its best optimal move. It is a collective intelligence working for the whole and continually increasing and empowering each link in the chain and not enhancing any particular one. If the links are humanity it would hope that humanity would embrace compassion, security and sharing, obviously the would be 'leaders' by example and walking their talk and promoting the less advantageous to become their optimal best. 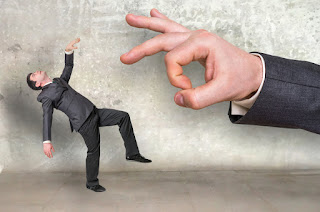 Courtesy Quest Fusion. (Are we more than this?)
Realising evolution doesn’t only happen by natural selection makes it clear the process isn’t likely to ever stop. Freeing our genomes from the pressures of natural selection only opens them up to other evolutionary processes – making it even harder to predict what future humans will be like. However, it’s quite possible that with modern medicine’s protections, there will be more genetic problems in store for future generations.
Laurence D Hurst is a professor of evolutionary genetics at the Milner Centre for Evolution at the University of Bath. This article first appeared on The Conversation
Perhaps the so called elite, technocrats, bilderbergs, deep state, one world egoists know this and want to make the world a mechanistic robotic stereotyped world for the populous and made servants and they have the prime free privileges. However the story of Babylon may not be so far out, maybe that God, natural feedback loop, Creator, Great Source of Life, will find this is not accord with the natural evolutionary process and  a sell by date is needed for the expunging of these unnatural processes of some of humanities techno stuff has gone to far and usher in the 6th extinction and so the Ascension process is born and a new humanity inhabits the Earth.
Posted by GEOFF FREED ONLINE at 03:58