Hello Happy Lockdown and a New Year. Cheers the new reset. It should be the new regret. Anything regarding the UK is very, very relevant to the rest of the world, they are frightened copycats but by murderous almost non human psychopaths.  I justify this when you read the connections in the UK to Big Pharma and those advising poor old BOJO and the pathetic Matt Hancock. Its a game of 'follow the money and the leader' and 'blinds persons bluff', got to be politically correct, Woke correct, fact checked correct and any other darn thing correct, in fact censorship correct

Humans of the GREAT RESET: What the future MIGHT look like in 2021 – if the controlling elites have their way

Yes one rubbing his hands in glee, one who thinks he is a royal and one who smirks and is a psychopathic monster. The last one wants total surveillance through implanting chips and vaccines galore and then take Elon Musk and filling our beautiful skies with thousand's of satellites.
www.rt.com/op-ed/511467-covid-confusion-deaths-lockdown/?utm_source=Newsletter&utm_medium=Email&utm_campaign=Email
http://worldnewsinsight.com/censored-jesse-ventura-tv-show-watch-now/3396/
This is about detention camps and the link above I Posted and alerted folks to on 5th April 2011 in my Archive Blogs and can be found in geofffreedarchive.blogspot.com (salvaged articles from the late energygrid.magazine)

There is a brilliant video in this article and it has been censored from YouTube. The very foundations of science are based on discussion and opinions, many papers are brought out on theories and assumptions even Einstein was questioned and debated. We now find we are in the UK advised by the Chief Scientist      Patrick Valance who was connected to GlaxoSmith and Chief Medical Officer Chris Whitty who has received funding from Gates Foundation and I wonder how there is not only cronyism or at least a conflict of interests and to say the least an  amazing coincidence.

Our hospitals are under more pressure than at any other time since the start of the pandemic, and infection rates continue to soar at an alarming rate. The vaccine rollout has given us renewed hope, but it’s critical for now we stay at home, protect the NHS and save lives.
9:20 AM · Jan 9, 2021
13.4K
See the latest COVID-19 information on Twitter

But while Boris was accused of not doing enough, he was also hounded for allegedly using fearmongering tactics to defend the new lockdown.

Many took issue with his suggestion that the NHS was facing unprecedented or alarming levels of strain, noting that it’s not at all uncommon for hospitals to fill up during the winter. 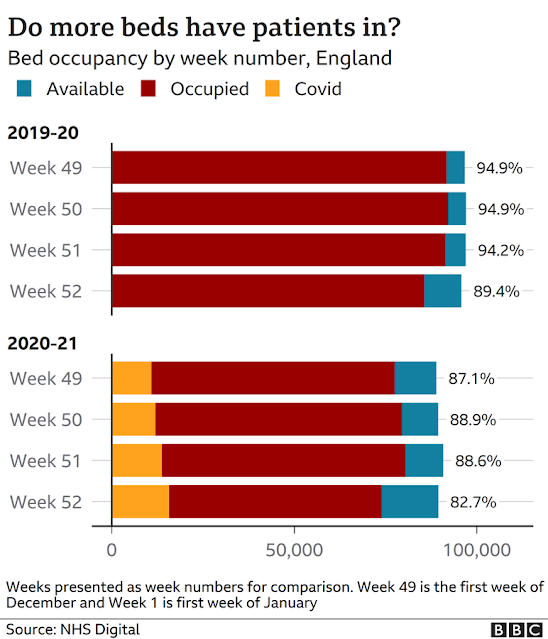 The occupancy rate is “actually noticeably lower than a usual year,” the BBC concluded.

YOU VILL OWN NUSSING AND YOU VILL BE HEPPY.

This is the face and uniform of the New World Order and reminiscent of a fascist technocracy, the uniform, the cult, the symbols. This smacks of fascism in fancy costume. I bet Henry Kissinger is jealous he missed out on the masters throne. Strange they accuse the Masonic Movement and its rituals and costumes and Grand Masters, so are we looking at another cult and is there a wild orgasmic ritualistic 'Wickers and Witches Coven (Covid)' are they getting off on this? You know what I mean.

How Palantir is quietly extending its reach through the British state https://newstatesman.com/2021/01/how-palantir-quietly-extending-its-reach-through-british-state

So who is really running the NHS? Interesting bunch. But do they all have care for the sick and vulnerable at the core of their being? Or perhaps money, profit and banking is more of their style? Worth a quick look here https://england.nhs.uk/about/board/nhs-england-board/members/… to read and judge for yourselves. https://pic.twitter.com/uwlNCRMGVG
It is said the threat to Julian #Assange is a threat to our "free press". Where is this free press now that Assange is back in prison? Who were his character assassins when he spoke the truth? Who exploited him but lacked the guts to defend him? Read on. https://jonathan-cook.net/blog/2020-10-2
Just because Dominic Cummings has been fired – doe not mean to say his campaign strategies that included the likes of Cambridge Analytica and Facebook and even more concerningly Palantir Technologies have gone away.https://truepublica.org.uk/united-kingdom
/new-bill-threatens-future-of-free-expression-and-civil-liberty/
Generation Betrayed. The Corona Regime in Schools. The Future of Our Children - Global Research https://news360.com/article/545730067…
Moderna admits here that what they inject now is an "operating system." | From the Trenches World R... https://news360.com/article/545807238…
more maybe tomorrow

When you read the articles in the link you will see how many top officials have broken covid laws how many have had businesses that have made fortunes and contracts gone out to 'friends and families of ministers', the phony figures and the police being 'picky' on old folk and being just plain stupid.
Surely one can see the holes are appearing and that this 'new strain' of the virus is the ordinary flu virus winterly mutation. Are they adding the flu to the covid--you bet.

The British Military Information War Waged On Their Own Population

You see the same players in these events. This is a world wide conspiracy and one has to wake up and do what you can. I feel holes are beginning to appear in the narrative and the FACT is to me that as discussion and censoring are so rife and ridiculous that they are scared and their clever psychologists and psychiatrists probably from army sources and used in negotiations and strategic 'psyops' are getting paranoid just as we are. Their biggest weakness is their arrogance and power by military / police force, intimidation and the 'bigger the lie and deception, the easier it is to fool the populous---they wouldn't do that to their own people would they' ----remember you are dealing with amoral, sociopathic psychopaths who think they are superior to the average person however they are gutter rats that only care for their power and when  your use is over, the asset you once were is tossed aside like garbage into the sewer and dump.
Be Very Aware
Be Well
Geoff

Posted by GEOFF FREED ONLINE at 16:16