Hello  This article below by spaceweather.com  sums all my writing in energygrid and in this site.

EARTH'S MAGNETIC FIELD IS CHANGING: Anyone watching a compass needle point steadily north might suppose that Earth's magnetic field is a constant. It's not. Researchers have long known that changes are afoot. The north magnetic pole routinely moves, as much as 40 km/yr, causing compass needles to drift over time. Moreover, the global magnetic field has weakened 10% since the 19th century.
A new study by the European Space Agency's constellation of Swarm satellites reveals that changes may be happening even faster than previously thought. In this map, blue depicts where Earth's magnetic field is weak and red shows regions where it is strong: Data from Swarm, combined with observations from the CHAMP and Ørsted satellites, show clearly that the field has weakened by about 3.5% at high latitudes over North America, while it has strengthened about 2% over Asia. The region where the field is at its weakest – the South Atlantic Anomaly – has moved steadily westward and weakened further by about 2%. These changes have occured over the relatively brief period between 1999 and mid-2016.
Earth's magnetic field protects us from solar storms and cosmic rays. Less magnetism means more radiation can penetrate our planet's atmosphere. Indeed, high altitude balloons launched by Spaceweather.com routinely detect increasing levels of cosmic rays over California. Perhaps the ebbing magnetic field over North America contributes to that trend.
As remarkable as these changes sound, they're mild compared to what Earth's magnetic field has done in the past. Sometimes the field completely flips, with north and the south poles swapping places. Such reversals, recorded in the magnetism of ancient rocks, are unpredictable. They come at irregular intervals averaging about 300,000 years; the last one was 780,000 years ago. Are we overdue for another? No one knows.
Swarm is a trio of satellites equipped with vector magnetometers capable of sensing Earth's magnetic field all the way from orbital altitudes down to the edge of our planet's core. The constellation is expected to continue operations at least until 2017, and possibly beyond, so stay tuned for updates.  Courtesy spaceweather.com. 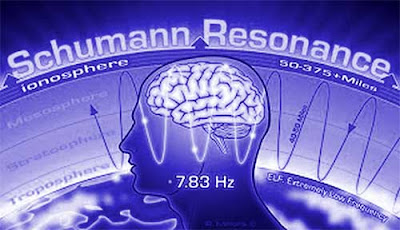 Courtesy  www.chromographics.institute..weekly.com
My research by synopsis was gleaned by electron volts, Oil rigs and their compass variations supplied by a Chief Engineer, research at Arctic ice drilling's from various sources and in particular Dr Paul La Violette a sample below:
Interview by Camelot.  Also search bar in this site and energygrid
Then was research into electron Voltswww.csiro.au/Portals/Media/Our-Galaxys-geysers-are-towers-of-power.aspx An excerpt from this as follows:


This is latest research above

An article by the Daly Telegraph Science Editor  revealed the startling findings of scientists in  and .

ADDITIONelectron volts as above:
I checked all NASA data over the years and the EV readings as a 'dip stick' these were all proofs for me of the '1967' writings which mention pole flips, magnetic North variations AS a indication of a next step in evolution and at each major magnetic shift evolutionary forms follow;- physical, technical, DNA (being held back by authorities)changes, and in particular ancient races and prophesies as in the Mayan, Aboriginal, Maori, Native American / Canadian and various Russian and Amazonian Shamans with ET contacts. 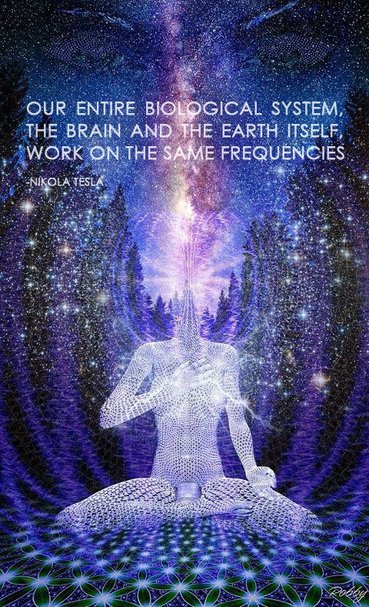 Courtesy holographicarchetypes.weekly.com
I Posted over the years non too technical stuff for instance;-

There is so much more, there are a couple of diagrams and the main fact I feel is that the Elite / illuminati / Bilderbugs know of this shift and that we are going from Homo Sapien to Homo Spiritualana or as I term it 'The new Aquarian Light  Body' and if the majority of us 'shift' they cannot rule us and bring in the New World Order.

The effects of solar storms can be seen in;-
POST 224 ADDENDUM 3 EXTENDED.
http://www.geofffreed.com/search?q=weather+effects

and
https://www.heartmath.org/category/gci-commentaries/
Then there was all the countless meetings, Skypes, travelling in the 60's/70's/ 80's/ 90's emails, telephone chats, 670 workshops and countless interviews after the workshops throughout Europe, Canada and the UK, the scientists, the ancient ones, lawyers, politicians, theologians and all else.(450 or so air flights, 242 train journeys and 175, 000 of driving, plus doing clinics and Forensic Work and recently some stuff with NASA.

Hope you enjoyed this round up.  Be Well. Geoff 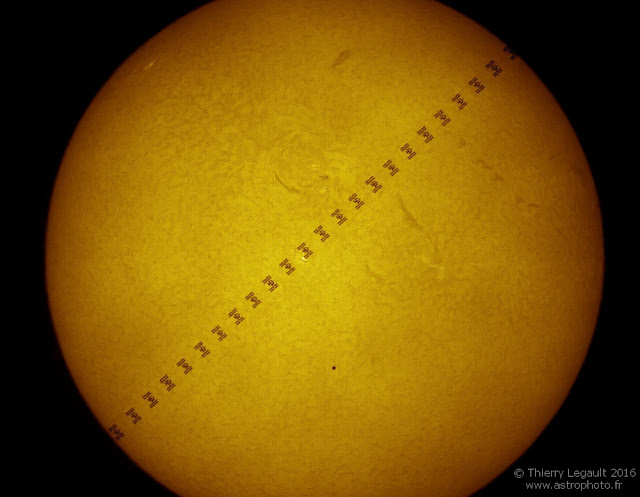 ISS and Mercury Too
Image Credit & Copyright: Thierry Legault
Explanation: Transits of Mercury are relatively rare. Monday's leisurely 7.5 hour long event was only the 2nd of 14 Mercury transits in the 21st century. If you're willing to travel, transits of the International Space Station can be more frequent though, and much quicker. This sharp video frame composite was taken from a well-chosen location in Philadelphia, USA. It follows the space station, moving from upper right to lower left, as it crossed the Sun's disk in 0.6 seconds. Mercury too is included as the small, round, almost stationary silhouette just below center. In apparent size, the International Space Station looms larger from low Earth orbit, about 450 kilometers from Philadelphia. Mercury was about 84 million kilometers away. (Editor's note: The stunning video includes another double transit, Mercury and a Pilatus PC12 aircraft. Even quicker than the ISS to cross the Sun, the aircraft was about 1 kilometer away.)
Tomorrow's picture: launch and landing