Hi There Folks I am about to do a mammoth summary and synopsis hopefully presenting the complete work of the ascension symptoms and adjuncts along with e UFO and ET.  Here is a snippet to whet your appetite, with a few odds and ends of interest.
-

Have you heard the story of the traveler, who approached the Buddha and asked: what are the people like in this town? The Buddha replied, ‘How were they in the last town?’

‘So are the ones in this town,’ said the Buddha.

Then the next traveler approached and said, ‘What are the people like in this town?’ And the Buddha asked again, ‘What were they like in the last town?’

Wonderful,’ the traveler exclaimed. ‘So welcoming and friendly!’

‘Well these people are the same,’ said the Buddha.

What you believe most comes to pass. Make sure this week you believe that something wonderful will happen to you.

Scientists admit the mumps vaccine—one component of the MMR jab—doesn't offer full protection anyway, and its effects wear off in time. This would explain why most of the outbreaks have been reported among teenagers and people in their early 20s, but it doesn't account for the steep rise that's happened in the last few years.
One study of a mumps outbreak among 259 students at the University of Iowa discovered that 98 per cent had received two doses of MMR when they were children.
The researchers from the Centers for Disease Control and Prevention (CDC) concluded that students who had been vaccinated more than 13 years ago were nine times more likely to contract mumps—and the protective effects had diminished to such an extent that they were no better off than those who had never been vaccinated. The risk fell only when the students were given a third dose of MMR, they discovered.
The outbreaks have been happening in close-knit communities, such as in student accommodation and among sports teams. Mumps is a disease of the salivary gland, and is spread through saliva, such as on drinking glasses, cutlery and plates.
Oh Boy  slaughter bots.  What next? 8 mins
Space Fence . 6 mins. You can see the trend.
Hi Geoff,
Two things for you today. The first is a quote from Rob Brezsny that brightened my day as soon as I read it. I hope this spoonful of ecstatic bliss does the same for you.
“It's about time you admitted that you are a miraculous work of art. You came into this world as a radiant bundle of exuberant riddles. You slipped into this dimension as a shimmering burst of spiral hallelujahs. You blasted into this realm as a lush explosion of ecstatic gratitude. And it is your birthright to fulfill those promises.”
Rob Brezsny
I just printed out these words and gave them a home above my desk :)
Courtesy  Nick Polizzi
Schumann Effect part 1  15 mins
More on the Schumann Effect. Most, Most important. 15 mins.
Quantum Solar Shift and ascension. 23 mins.
Readers, thank you for your patience while we continue to develop this new section of Spaceweather.com. We've been working to streamline our data reduction, allowing us to post results from balloon flights much more rapidly, and we have developed a new data product, shown here: Why are cosmic rays intensifying? The main reason is the sun. Solar storm clouds such as coronal mass ejections (CMEs) sweep aside cosmic rays when they pass by Earth. During Solar Maximum, CMEs are abundant and cosmic rays are held at bay. Now, however, the solar cycle is swinging toward Solar Minimum, allowing cosmic rays to return. Another reason could be the weakening of Earth's magnetic field, which helps protect us from deep-space radiation.
The radiation sensors onboard our helium balloons detect X-rays and gamma-rays in the energy range 10 keV to 20 MeV. These energies span the range of medical X-ray machines and airport security scanners.

The data points in the graph above correspond to the peak of the Reneger-Pfotzer maximum, which lies about 67,000 feet above central California. When cosmic rays crash into Earth's atmosphere, they produce a spray of secondary particles that is most intense at the entrance to the stratosphere. Physicists Eric Reneger and Georg Pfotzer discovered the maximum using balloons in the 1930s and it is what we are measuring today.
The Pulsing Sun Nassim Haramein 11 mins
The above is a clip from the full 8hrs long one by Nassim.
UFO and Nassim NASA. footage part of the 8 hrs one. 4 mins
Commentary not too good b est to look at Nassim really said and more in the longer version.
This is my Stargate, wormhole, black hole theory way back when in energygrid and can be found in  http://geofffreedarchive.blogspot.in  in search bar under Stargate and scroll down past photo of lady.
It as spiked at 90 and 136 lately. 6 mins

Some Posts back I showed videos of the Atlas Robot----look at what he can do now.  Then he opened doors and packed shelves and so on and now----Wow. 1 in
Perhaps you may remember my information way back on AI and the trans-humanism with Ray Kurzwell and co and the Atlas Robot 1. 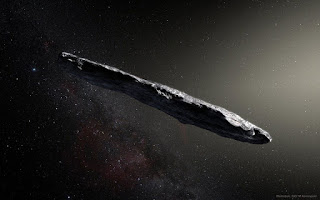 INTERSTELLAR ASTEROID "LIKE NOTHING SEEN BEFORE": In Oct. 2017, the Pan-STARRS 1 telescope in Hawai'i picked up a faint point of light moving across the sky. At first it appeared to be an ordinary asteroid--but astronomers quickly realized it was something entirely different. The hurtling object, since named "'Oumuamua," came from interstellar space. At the time of its discovery, 'Oumuamua had just swung around the sun. Telescopes around the world swiveled to observe it before it could leave the Solar System. Findings from those rapid observations were published in the Nov. 20th issue of Nature, and they reveal a very strange object indeed:


According to a European Southern Observatory (ESO) press release, 'Oumuamua is "like nothing seen before." It is red, made of dense rock or metal, and is shaped roughly like a giant cigar at least 400 meters long.
These are the findings of a team of astronomers led by Karen Meech (Institute for Astronomy, Hawai`i, USA) who combined images from the ESO's Very Large Telescope in Chile with other large telescopes. 'Oumuamua varies dramatically in brightness by a factor of ten as it spins on its axis every 7.3 hours. "This unusually large variation in brightness means that the object is highly elongated: about ten times as long as it is wide, with a complex, convoluted shape," says Meech.
The asteroid's dark red color is probably caused by cosmic rays irradiating its surface for millions of years in deep space. Cosmic rays have a similar coloring effect on asteroids and comets native to our outer Solar System.  Courtesy spaceweather.com
A great chem trail expose and explanation. 9 mins
Posted by GEOFF FREED ONLINE at 02:42