MASKS ARE A SYMBOL FOR SLAVERY

"It means - I am not a free agent...I also see the mask as equivalent to the yellow star that I had to wear." - Vera Sharav.

It was interesting at the start of the Pandemic the UK Chief medical Officer Dr Chris Whitty said; 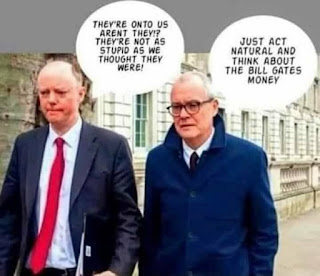 interesting that Fauci in the USA said the same thing and changed at the same time. Anything to do with Gates?
See last Blog August 1st 2022, the same messages are beginning to appear again.
Read this on masks if you will;

As a person who went to medical school, I was shocked when I read Neil Orr’s study, published in 1981 in the Annals of the Royal College of Surgeons of England. Dr. Orr was a surgeon in the Severalls Surgical Unit in Colchester. And for six months, from March through August 1980, the surgeons and staff in that unit decided to see what would happen if they did not wear masks during surgeries. They wore no masks for six months, and compared the rate of surgical wound infections from March through August 1980 with the rate of wound infections from March through August of the previous four years. And they discovered, to their amazement, that when nobody wore masks during surgeries, the rate of wound infections was less than half what it was when everyone wore masks. Their conclusion: “It would appear that minimum contamination can best be achieved by not wearing a mask at all” and that wearing a mask during surgery “is a standard procedure that could be abandoned.”

I was so amazed that I scoured the medical literature, sure that this was a fluke and that newer studies must show the utility of masks in preventing the spread of disease. But to my surprise the medical literature for the past forty-five years has been consistent: masks are useless in preventing the spread of disease and, if anything, are unsanitary objects that themselves spread bacteria and viruses.

Schools in China are now prohibiting students from wearing masks while exercising. Why? Because it was killing them. It was depriving them of oxygen and it was killing them. At least three children died during Physical Education classes -- two of them while running on their school’s track while wearing a mask. And a 26-year-old man suffered a collapsed lung after running two and a half miles while wearing a mask.

Early in the pandemic - "masks are unnecessary"
In the early onset of the pandemic, nearly all organizations and specialists, including Dr. Anthony Fauci (March 8, 2020), advised against wearing a mask. The science simply did not support community wearing of masks:
"There's no reason to be walking around with a mask," infectious disease expert Dr. Anthony Fauci told 60 Minutes.
While masks may block some droplets, Fauci said, they do not provide the level of protection people think they do. Wearing a mask may also have unintended consequences: People who wear masks tend to touch their face more often to adjust them, which can spread germs from their hands."[R]

Fauci later walked back those comments and tried to explain his comments were taken out of context. Instead of saying he was wrong and pointing to scientific evidence that caused him to change his mind, he obfuscated. (I wonder how much $ had to do with this and if you care read back many blogs the scandals he was involved in and how he sold viral information and took part in hideous experiment on dogs---Foust might be a better name---

The legend of Faust from the Renaissance times. The end ...

Faust or Faustus is a scholar who sells his soul to the Devil. Although fictional in literature, the legend is based on an astrologer and alchemist who ...and a worlock.
https://www.britannica.com › Faust-literary-character
There is evidence which I have blogged that Fauci, Bill Gates, The Imperial College, The Sage advisors in the UK especially the two (are in image above) are part of a of the group which implements the will of The World Economic Forum and the inflated bizarre uniforms and robes of the new priesthood and their Bishops in Government and the Vatican which is the World Economic Forum and their local priests certain sleeping MP's and their Satanic sacrifices the sacrifice to the Great God Pandemic and its medicine experimental vaccines and really a gene therapy and their sacrifice to this GREAT God of Mammon and in my view giving all these vaccines to the very young children with experimental vaccines is almost a human Beagle experiment. There are millions of vaccine injuries YES millions and I am one of them.
Please do your research and see we are heading to a food and drought and financial  'Pandemic' ---Yes food by greedy persons causing artificial shortages and blaming on the lack of lorry drivers, the wars in Ukraine, EU and border controls, the stupid bias of not using Nord Stream 1 and 2 gas pipelines and the war in Ukraine because the USA tore up the The Minsk Agreement, the weather because of the incorrect information about climate change and the greed of carbon emissions and blaming the general public and weather manipulation by HAARP and chemtrails ----IT CAN BE STOPPED BY GENUINE POLITICIANS AND THE DISPESAL OF THE WHO, THE WEF AND a cleanout of the UN.
OK
Be Well
Geoff
Posted by GEOFF FREED ONLINE at 05:35