APOLOGIES  the article is long with two ADENDUMS

Comparison of the 5 extinctions to the expected 6th Extinction and the possible urge to go to the Moon and Mars.  NASA hides the facts about Moon and Mars bases as nonsense and conspiracy but slips of the tongue and astronauts who have left wills and diary's tell a different story. All the planets and the Moon and Sun are going through an evolutionary cycle and it is part of the Cosmic Universal Evolution and should we survive a new human like Neanderthal Human to Homo Erectus to Homo Sapiens to what I call Homo Spiritulana Energetica, they are arriving in dribs and drabs now without genetic engineering or tampering.  There is proof of naturally altering DNA not by human hand interfering with nature as proof below. 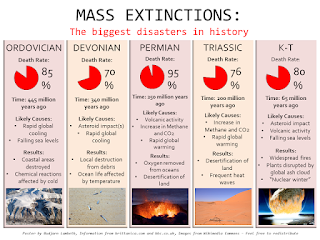 This ancient crisis around 445m years ago saw two major waves of extinction, both caused by climate change associated with the advance and retreat of ice sheets in the southern hemisphere. This makes it the only major extinction to be linked to global cooling.

This extinction caused the demise of around 57% of marine genera (the taxonomic rank above the species level), including many trilobites, shelled brachiopods, and eel-like conodonts.

This period is now regarded as a number of “pulses” of extinction spread over 20m years, beginning 380m years ago. It saw the extinction of around 50% of marine genera; among the species killed off were many corals, trilobites, sponges and the heavily armoured fish known as placoderms. This extinction has been linked to major climate change, possibly caused by an eruption of the volcanic Viluy Traps area in modern-day . A major eruption might have caused rapid fluctations in sea levels and reduced oxygen levels in the oceans.

Scientists have recently discovered another event 262m years ago that rivals the “Big Five” in size. This event coincided with the Emeishan eruption in what’s now , and is known to have caused simultaneous extinctions in the tropics and higher latitudes. In particular, there were exceptionally high extinction rates: more than 80% of species were wiped out, among them brachiopods and single-celled benthic foraminifera.

The Late Permian mass extinction around 252m years ago dwarfs all the other events, with about 96% of species becoming extinct. This included more trilobites, corals, and whole branches of species of terrestrial animals. The extinction was triggered by a vast eruption of the Siberian Traps, a gigantic and prolonged volcanic event that covered much of modern day , which led to a cascade of environmental effects.

A greenhouse effect rapidly took hold in the atmosphere, while the oceans suffered acidification and xygen depletion. The ozone layer was partially destroyed, meaning lethal levels of UV radiation reached the Earth’s surface. The recovery took almost 10m years and even then, the unstable environment this catastrophic crisis created meant the subsequent Triassic period saw intermittent bursts of heightened extinction.

Many scientists feel we are approaching the 6th Extinction and that we have no hope and the real reason for climate change is as above the birth from Pangea (which explains why fauna, forests were found under the ice sheets at Antarctica) and as the five extinctions show they are the evolving plan of Nature (God, Great Spirit, Source of Life, Divine Plan as for believers----just an accident and big bang scientists) so the continents today are slowly drifting apart and some coming closer. The Solar system planetary changes show a similar development and the cause of the climate change to the solar system planets goes through a similar set of massive cycles. We have the technology that is harmless to Earth to offset a lot of the impending 6thextinction but not the Political WILL.
Mathematicians and statisticians can crunch the numbers and do the maths and many a discussion and fierce debates still range over Darwin, Creative Intelligence,  Divine Intelligence, The Big Bang and more , HOWEVER numbers and statistics can be vary greatly and do many times to suit the purpose involved.
I know I have repeated these themes many times and as the floods for instance this shocking fact as of Posting
Even this does not tell the full story,  because the Sun is in its 11 (eleven) year high solar flare cycle and the solar winds caused by the solar flares, CME'S, HSS, and so on they are still significant to cause
the # 1,2,3,4 and a few blogs back there is detailed article by Lyn McTaggart on Weather Sensitivity and a reread will perhaps show the 'so called hidden from medical explanation' for a lot of aches pains and that grain fog and one degree under feeling and the blues.
Be Well
Geoff
ADDENDUM 2
THE SUN

2) Magnet Field increased and strengthened by 230%.

6) 2006 NASA stated that the Suns conveyor belt had slowed down 1.0 meters per second  to 0.75 per second in the North and in the South 0.25 meters per second. Previous to this the speed had stayed fairly constant since the 19th century, it take about 37 - 40 yrs to complete the cycle, in 2008 NASA  commented this was very important and notable change  and the Sun's surface flows had slowed drastically. In 2000 NASA  commented this was the quietest Sun in almost a century, due to the lack of sunspots, flares, CME's on the surface. This baffled scientists because the Sun's' 'a comment by astronomer's was that the Sun's activity peaked around about 1984 / 85  and has been sliding down even though global overall temperature's have risen because if the Sun's downward trend was to have shown to have a cooling effect it should have been evident by now and certain scientists feared there may be a possible rising new peak of solar activity. Strangely enough NASA felt significant changes may come about in 2012. HHM!! SEEMS TYPICAL NASA confusion

95% of the neurons (the bits that trigger and fire information) in our brains are in the cerebral cortex, the thin brown layer of jelly that actually surrounds the brain, analagous to humanity's existence on the surface of the Earth. Linking the two hemispheres of the brain is a bunch of fibres known as the corpus callosum. It can be proved that in artists, musicians, left handed people and in those who are comfortable with being out of the norm that the corpus callosum is growing physically larger, and it appears within the last thirty or forty years that this growth increase is exponential, not only in these people but in all of us. The bridge between the left and right brains was the width of a thin pencil a hundred years ago, and I'm assured by a couple of mortician/pathologist clients of mine (really!) that in many people now this bundle of fibres is now the width of one's forefinger. This suggests to me that the interface between the left and right brain in most of us is now considerably more active than it was three or four generations ago. Of course this could be down to our diet. Courtesy of Steve Judd Astronomer 2011, I do not agree diet, see the energies and changes. I witnessed other changes and this one in my 36 years in Forensics and much more.

Fermi is picking up crazy charged particles via electromagnetic waves - and it's detecting so many of them Fermi has been able to produce the first all-sky map of the very high energy universe.

The Fermi Gamma-ray Space Telescope is a space observatory being used to perform gamma-ray astronomy observations from low Earth orbit. Its main instrument is the Large Area Telescope (LAT), with which astronomers mostly intend to perform an all-sky survey studying astrophysical and cosmological phenomena such as active galactic nuclei, pulsars, other high-energy sources and dark matter.’ January 27th 2010 I have written in back blogs about the Portals found by Fermi and so on.

When asked what is the origin of these new found charged particles, and where do they come from? Dave Thompson, an astrophysicist at NASA's Goddard Space Flight Center gave us his answer. "It's a mystery, for one thing. About a third of the new sources can't be clearly linked to any of the known types of objects that produce gamma rays. We have no idea what they are. The other two-thirds have one thing in common - astounding energy."’  Courtesy Mitch Battros

An article by the Dailey Telegraph Science Editor  revealed the startling findings of scientists in  and .

“ Something out there –no-one knows what- is hurling high energy particles around the Universe, in this case the most energetic ever observed by scientists…Not even the power released by the most violent exploding stars could account for them. Indeed conventional theory says such particles should not exist…”        ---- Still think it is all our fault with global warming---yes we must put up our hands and admit we play our part in it----but not to heat the outer planets and cause the huge changes in the Sun

Increased exposure to microplastics, nanoparticles, chemicals in masks and nasopharyngeal tests parallel many of the symptoms that define long COVID.

Surveys among thousands of people suggest that 7% to 30% of people who tested positive for the SARS-CoV-2 virus experienced one or more symptoms for a period longer than 12 weeks.

n a meta-analysis by an interdisciplinary team of German physicians, a potential risk of Mask Induced Exhaustion Syndrome (MIES) has been found. The most frequently observed symptoms (fatigue, headaches, dizziness, lack of concentration) as described for MIES overlap with important symptoms for long COVID syndrome.

Severe nose bleedings (epistaxis), cerebrospinal fluid leakage, vomiting, dizziness and fainting have been reported. Most frequently used masks and nasopharyngeal tests are derived from with less strict controls and measures for the presence of hazardous materials.

what this means to your children and to us. We will be remotely controlled organic robots and we will not be able to distinguish between our thoughts(we are all brain washed already when we are born we have just feelings imprinted in the womb) and from some exterior sources, we are born and given a sound which then becomes our name when when our brain develops, then our religion or not, ethics, culture and so on, we think we are unique and independent, many of us are TAUGHT to be who we are, we had no choice as a child and by inculcation (brain washing) WE THINK WE ARE FREE  and have our own mind, the most we can do is a few variations. ALL LIFE STYLES ARE SWAPPABLE and so one can swap one style, religion, philosophy and become inculcated in that. KOAN 'who was I before I was brainwashed'