Ooh or Eeh by gum(Yorkshire UK slang for isn't cold outside or similar event)well it is blowing cold for some whistle blowers and their perpetrators of these conspiracies or not.
Jeff Rense and MH 370 a better recording.
In this March 25, 2014 interview
by Jeff Rense of ace journalist,
Yoichi Shimatsu, they get to the
bottom of the bottomless pit of
disinformation, swirling around
the mystery of the "disappearance"
of Malaysia Airlines Flight 370 and
arrive at Shimatsu's assessment
of the ultimate fate of the plane's
passengers - and the reasons for
the completely international
nature of this obvious cover-up,
which has had a powerful effect
on increasing public distrust of
the Criminal Mainstream Media.

As Shimatsu had previously written,
in an article on Rense.com: "...Freescale
has extensive contracts with the US
military, producing wafers and circuits
for navigation, periscopes, electronic
targeting, self-guided missiles and other
weapons systems that require
intelligence controls.

"...Japan, France and the UK, along
with Russia, China and Iran, all want
the leading-edge [technology] that
contractors like Freescale provide.

"Tiny though it may be, the micro-
controller is the key to next-generation
of warfare, based on self-guidance,
tactical versatility and hierarchy of
commands, in short: an adaptive
thinking weapon that can outsmart
foes...

"The airliner's descent over the Maldives,
according to witnesses, went smoothly, for a
safe landing on the long tarmac at the US
Military Base on Diego Garcia Island, also a
CIA rendition center with [vast] underground
hangars and a prison, used during the Iraq
and Afghan wars.

"Upon arrival, the passengers would be
herded into separate waiting areas, with the
prize captives from Freescale Semiconductor
sent to a debriefing facility, where their hard
drives, laptops and smartphones would be
confiscated and data downloaded, while the
human intelligence assets were being
questioned. The interrogators had a
fairly easy task, in telling the
defenseless programmers: 'Join us or
die with the rest.'

"The cooperative would be given a new
identity, and reintroduction into civilian
life in a remote North American community,
after being administered memory-erasing
drugs, similar to the ones first developed in
the MK-ULTRA program.

"After vetting of all passengers, the uncooperative
and high-risk suspects would be drowned and
their corpses tossed near a phony "crash site",
off the coast of Western Australia, while US
submarines discharge other bits of "evidence"
into the cold waters...

"Once the operation is completed and the media
begin the mourning rituals, tearful American
diplomats will attend memorial services for the
missing victims of a tragic accident.
"Meanwhile, a cabal of Air Force officers
and defense contractors will be clinking
beer mugs with their former boss and guru,
Gen. Michael Hayden, the bureaucrat who
militarized space and expanded the NSA
into the global monstrosity that it has since
become."
( Courtesy Forbidden Knowledge. Alexandra Bruce)
More Madness a crazy world. Wow
Manic  Rabies to eat !!!?
http://news.uk.msn.com/world/internet-is-cia-project-says-putin 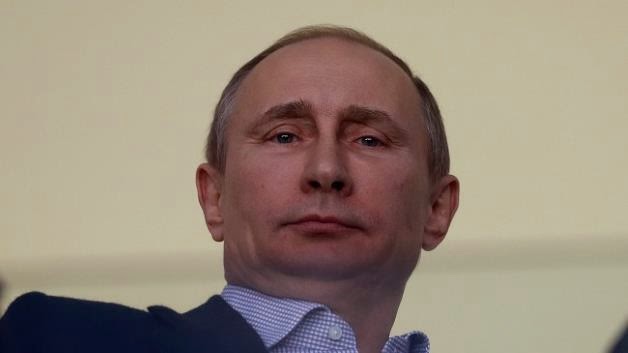 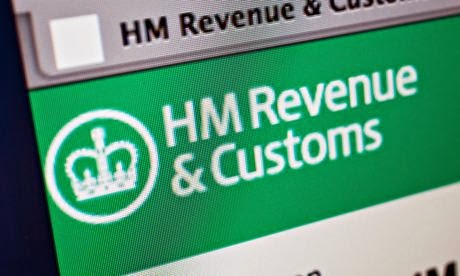 The new legislation would allow HMRC to release anonymised tax data to third parties including companies, researchers and public bodies where there is a public benefit. Photograph: Michael Kemp/Alamy 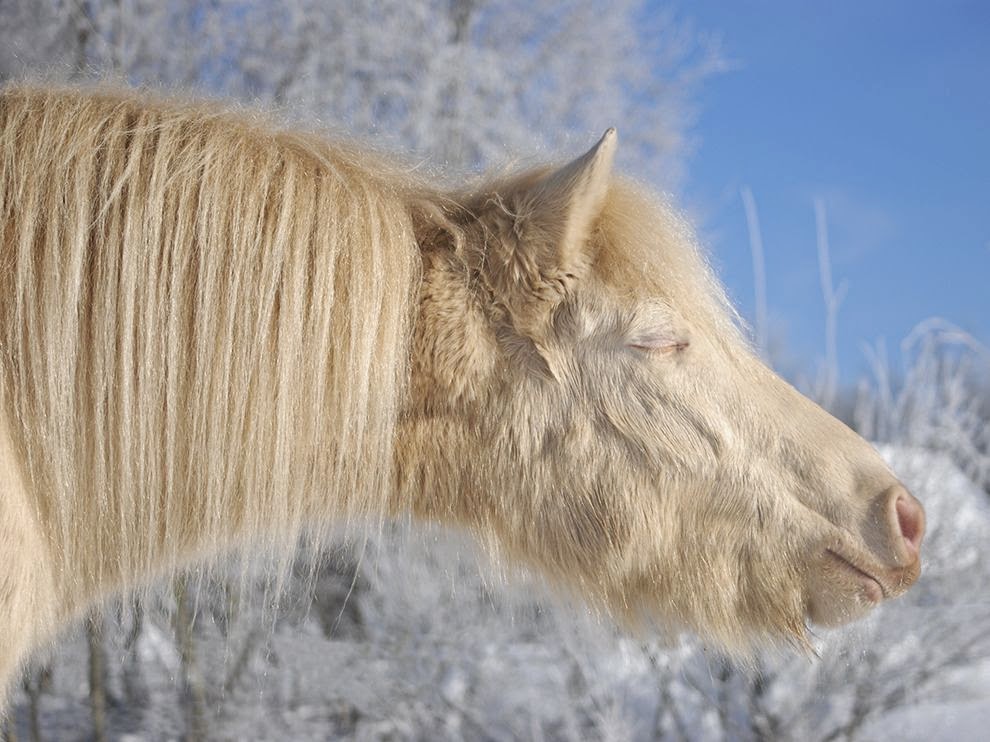 Happiness Is a Warm Sun

Photograph by Kersti Kalberg, National Geographic Your Shot
"It was the first beautiful winter day in over a month, and the sun came out and everybody just stopped," says Kersti Kalberg, a member of our Your Shot community. "The world almost stood still, and the silent happiness just poured in."
Kalberg went for a walk to enjoy the day, as did many others, including the pony, Rainbow, found standing in the sunlight. "It looked like he was just feeling the sunlight and fresh air. I found it something remarkable, as if he were there for me to finally understand how similar people and animals sometimes are." (Thank you Kirsti)  [Nice to find something sane and beautiful]
X-FLARE, RADIO BLACKOUT: Departing sunspot complex AR2035-AR2046 erupted on April 25th at 0032 UT, producing a strong X1.3-class solar flare and an HF communications blackout on the dayside of Earth. NASA's Solar Dynamics Observatory recorded a flash of extreme ultraviolet radiation from the explosion: 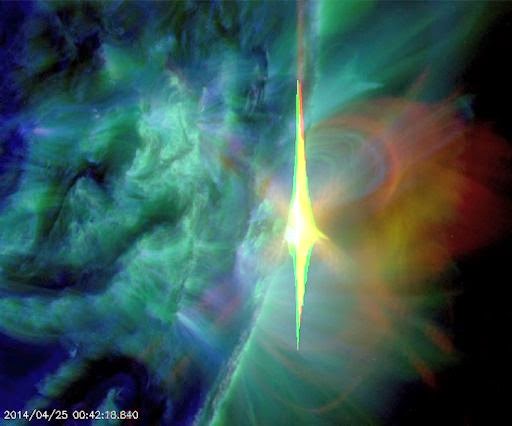 The explosion also produced a CME, but because the blast site was so close to the sun's western limb, the cloud is not heading toward our planet. The chance of a geomagnetic storm remains low.
Never the less these do produce biological issues no matter what the Authorities say.  Check out link below.
http://www.energygrid.com/destiny/geoff-freed/2012/03c.html


The ​secret life of a teenager with HIV 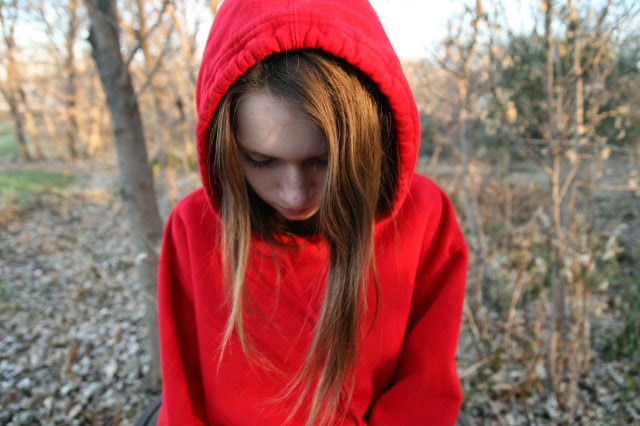 This image is rumored to have been
taken by the International Space Station
and is estimated to be around 3-5 thousand
miles in diameter and parked somewhere
in the Earth's stratosphere.
The image was published on November
12, 2013 by the 'Correio Braziliense', a
local newspaper in Brazil's capital city.
The photo was published in conjunction
with the announcement of the re-opening
of that city's planetarium, which had been
shuttered for 16 years.

I foud the newspaper's webpage, which
featured this image and as a native speaker
of Brazilian Portuguese, I found and browsed
the planetarium's site and found no reference
to this image.
The uploader says he has inquired the
planetarium directly about it in his upload,
made on March 29, 2014.
Neither he nor I have any idea what this
object is.( Courtesy Forbidden Knowledge--Alexandra Bruce)


Ooops
https://uk.news.yahoo.com/thousands-cars-stolen-using-hi-tech-gadgets-011316589.html?vp=1#9abm9HV
We are from the Future  repeated in Post 158 on Light. Just to get you in the mood.
http://www.ronpaulforums.com/showthread.php?451703-Barack-Obama-and-the-Monsanto-Betrayal

Oh Boy more food corruption for £,$, and ill health.  Which in turn creates more wealth for Big Pharma, reduces slowly and painfully the worlds population or at the most dumb's us down.  Lethargy, fatigue, obesity, unclear thinking, foggy brain. Great bring on the toxicity.

OOPS
http://www.forbiddenknowledgetv.com/videos/activism/unacceptable-levels---vod-premiere-1.html
IF YOU CAN RENT THIS VIDEO OR BUY IT PLEASE DO. IT IS VITALLY IMPORTANT FOR OUR FUTURE.
Odessa--- the the real truth.  This is dynamite and if you link the above you will see Nuland and astonishing BBC footage to Neo Nazis along with prominent USA politicians.
Michelle Obama --- a real groovy babe---good on you first lady.

Use your mobile (cell) phone sparingly. Talking on your mobile phone for more than 30 minutes every day could nearly triple your risk of developing a glioma, a common form of brain tumour, researchers have announced this week.
The risk is highest among the heaviest users of mobiles, who spend anything from 30 minutes and 80 minutes or more every day making calls, say researchers from the French CERENAT study. However, there is no risk among occasional and light users.
The most likely form of tumour that can develop after heavy use is a glioma, but researchers found that another type, a meningioma, was also regularly seen among the study’s participants.  In all, researchers recorded 253 gliomas and 194 meningiomas among the participants.
Fears of a link between mobile phone use and brain tumours have been voiced for nearly 20 years, although a large study, sponsored by the mobile phone industry, found no association.
The CERENAT findings put the problem right back on the table.
(Source: Occupational Environmental Medicine, 2014; doi: 10.1136/oemed-2013-101754) 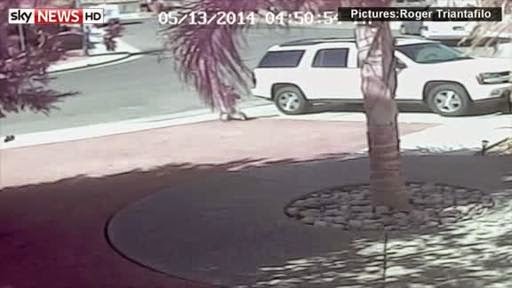 A revealing 11 mins.
"Let me control the Money and I care not who sits on the Throne"
Lord Rothchild. 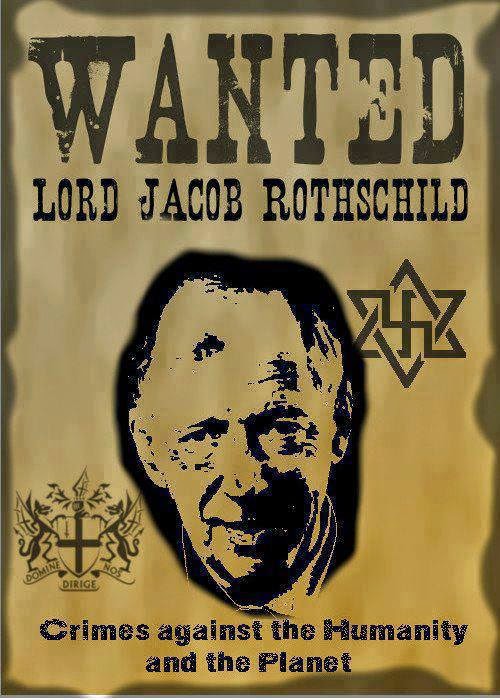 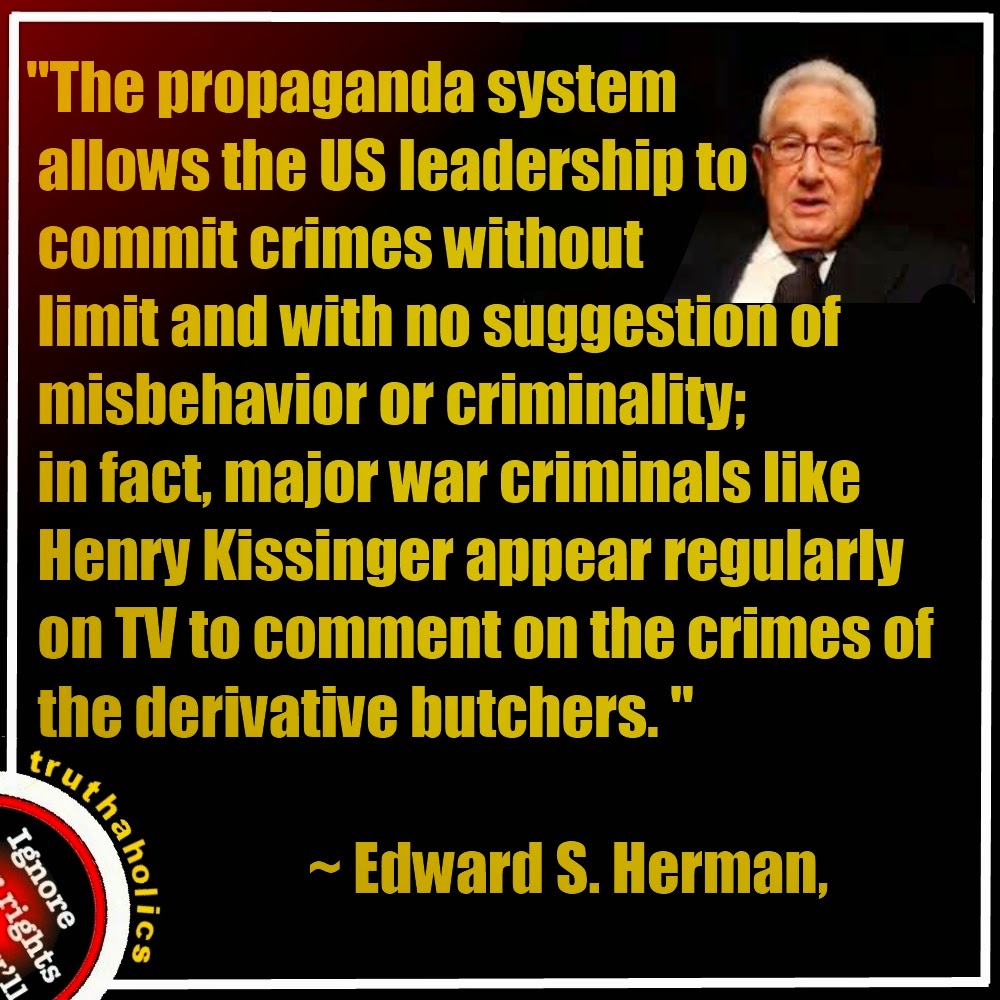 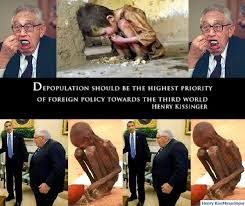 Courtesy www.alipac.us
You know we need to face these stark brutal facts and realise these are people just like us, they have bodies, families, flesh and blood and yet why are they as they are?  Why are we, you, us the way we are?
Be who we truly are, find it, seek it and Be It.
Be Well. Geoff 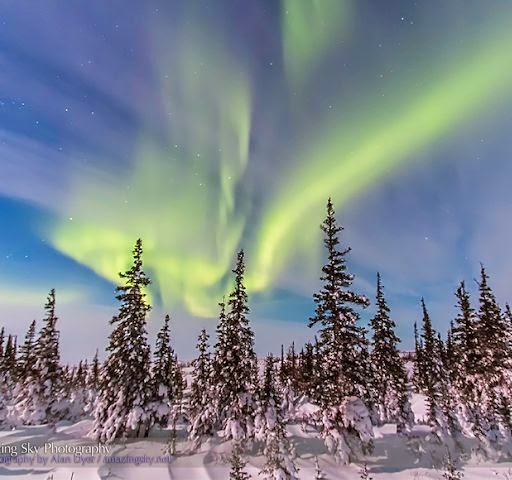 Posted by GEOFF FREED ONLINE at 04:15