Hello.  When I was a lad we had a very rude poem which started ' Oh dear what can the matter be two old ladies locked in a lavatory, they've been there from Sunday to Saturday, I wonder what the matter could be'.  Well there is more I cannot remember it and do not want too.  Anyway greetings folks and hope your ablutions are not so lengthy or laborious.

Courtesy S182.photobucket.com
Not quite like a lavatory, it's the nearest I could get.

I live in sheltered Housing, or rather was sheltered housing, until the authorities decided they could not afford a scheme manager, long story why I had to live here.  Anyway there are many elderly women and men, I suppose at 76 years young I am as well, however, I like my neighbours they are generally more sensible and wise than most and in some cases great fun.
The point being that politically, religiously and media wise we all are or seem to be going down the pan or tubes and we all seem locked in the global lavatory.  As above alcohol, distraction and release from the pain of world events are being adequately supplied by the media and employed to take our eye off of the terrible corruption and maiming going on. More football, darts, soaps, violent films, games, cartoons and toys. More open sex programmes getting ever risky and provocative. More expensive wages for footballers and celebrities.  So the merry go round is in full swing, more world war threats, more deliberate false flags. One day it will explode, hopefully a cleansing. 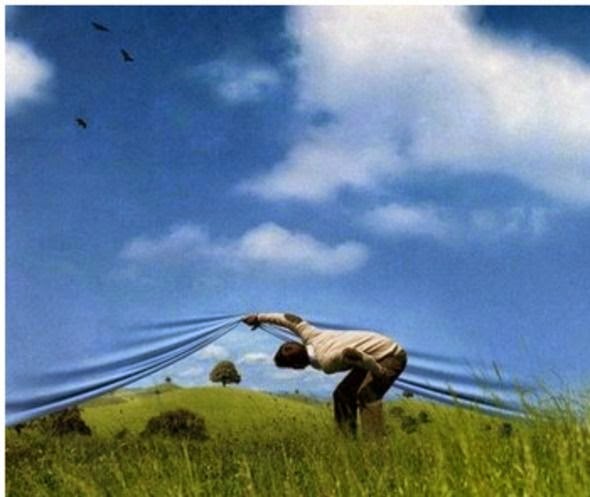 I feel the image above depicts a view which I have felt since the early 70's that the world will have to go through a cleansing, a purification and every demonic, horrendous, monstrous atrocity will have to come out and be purified.
I feel the monster is coming out of the deep, the depths of depravity, debauchery, violence, lust and social depravity and amoral dysfunctions.
The boil has to be lanced or has been, I think the first atom bomb  test by Oppenheimer rent the veil of material world and let lose a 'nuclear reaction' in the collective unconscious and the waves are still lifting the veil as above.
When the global mind unconscious really wakes up to the fact most of anything is 99% empty. 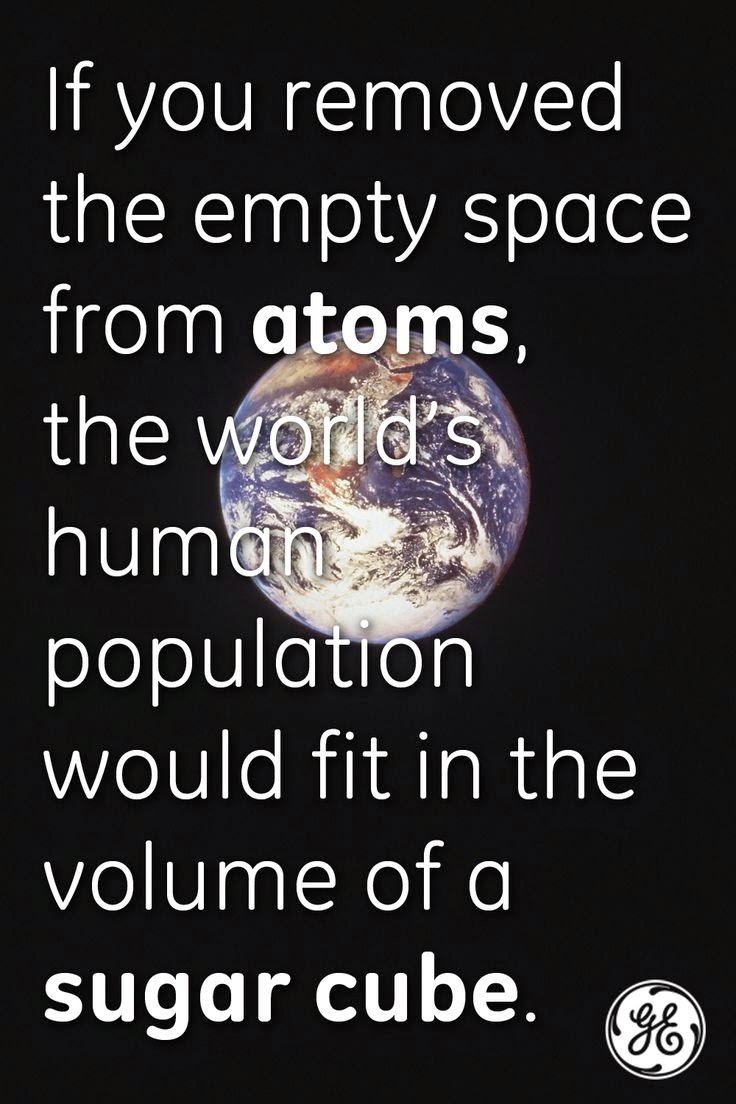 Courtesy www.printerst.com
I realised when I studied quantum stuff that the ego, which in my view is a bunch of collective programmes encased in a magnetised containment field and appears to be real, only because it is impacted, ground in, etched and pummelled, pressed down and made solid, indeed like the trillions of billions of atoms that make everything from stars, to humans, to animals, to infinity so to speak. So we are all brain washed to some extent, hand me downs from far and distant generations, and change challenged defiantly. 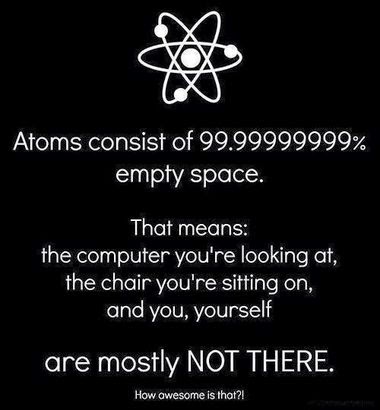 iqballatif.newsvine. com
So in a sense we are a dual personality, who we are at source and then the overlaying programmes, so this entity with a life separate from source has to have a guardian, a sentinel, a defence ministry and of course like most religions, sects, governments it has a defence and attack programme and strategies.  The main one is the council or ministry of FEAR, this is the main defence Boss, deciding attack, defend or some strategy. 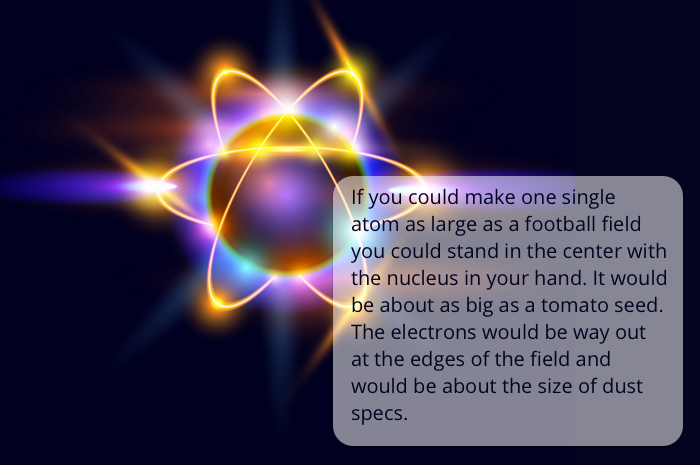 Courtesy. wholehumanpllc.com
As many a teacher has said we need to awaken from the dream. In the light of the above the dream is being seduced, that form, so called solids, semi solids are real in and everlasting.  So this dream when busted, opened can be threatening to the ego which tries to solidify everything.  Health issues, mortality issues, war, hunger, tragedies,  meditation, contemplation can shake one up and so produce a profound change in attitude, ego make up and the ego can reel from a huge body blow. A gut wrenching experience. 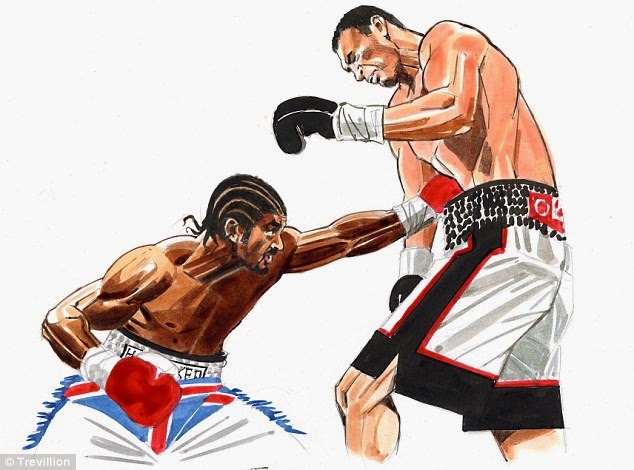 axiomamnesai.com
So the ego being or sensing it is a separate unit, form in a solid world, then begins to find out, if it ever does, it is limited, the host flesh body dies, be it a planet, star or a human flesh body.  This is indeed a wake up call, eat healthy, exercise, dam it I am going to die I will smoke, drink, I will ----------?  Nothing seems to put of that inevitable day--- I will die, perish, oh boy, I accept death is oblivion, is it? What about reincarnation, oh that's old lady in the lavatory isn't it?
Then perhaps one accepts the ego as a temporary, transient being, and just simply accepts that is a tool for living in this Earth environment, no big deal. No way I want to be a quadrillion Billionaire, I want to rule the world, you wimps are afraid, get out there join the club, crap on the weak, just use them for getting more power, rule them, make them sick sell them drugs to make them better and make money out of their weakness.  Where  have I heard this before.

Courtesy www.ratical.org
Do we have to wait that long as above. Maybe we have to let the puss, the putrid effluence vent out. After all we have to tend to our own boil or cancer first. 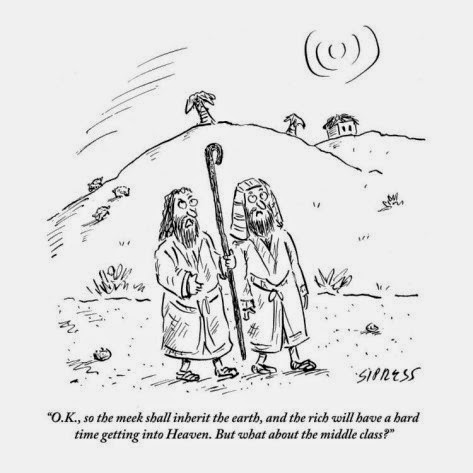 Courtesy googleimages
Of course the ideal would be the middle way, not so much the middle class. The balance point between extremes, the pivot, and on examination the pivot point can be likened to the Centre Of Gravity, the turning point, the middle of the wheel where all the spokes of Life emanate from.  Where is this in the human, form wise below the navel, mind wise, in the calm unthinking mind, a mind at rest, enjoying its serenity, one feels peace, well being and compassion and so in an apparently meek state owns the world, not as a possession but a feeling bon ami, a feeling of agape. Perhaps this could be a way for the meek to inherit the Earth

SOMETHING AMAZING HAPPENING AT JUPITER: Jupiter and Earth are converging for a (relatively) close encounter in early February when the giant planet is at opposition--that is, directly opposite the sun in the midnight sky. This sets the stage for an extraordinary sequence of events. For the next couple of months, backyard sky watchers can see the moons of Jupiter executing a complex series of mutual eclipses and transits. Astrophotographer "Shiraishi" Kumagaya-shi, Saitama, Japan, captured this example on Jan. 17th:
"First, Ganymede partially eclipsed Callisto; then Europa partially eclipsed Io," says Shiraishi. "I did not need a telescope. To photograph this double mutual event, I used a Nikon Coolpix P510 digital camera set at ISO 800 for a series of 1/10s exposures."
The moons of Jupiter will be passing in front of one another and in front of Jupiter with fair frequency through March 2015 and beyond. This is happening because Jupiter's opposition on Feb. 6th coincides almost perfectly with its equinox on Feb. 5th (when the Sun crosses Jupiter's equatorial plane). It is an edge-on apparition of the giant planet that lends itself to eclipses, occulations and transits.
The next big event is right around the corner. On Jan. 24, 2015, beginning at approximately 06:26 UT (1:26 AM EST), the three moons Io, Callisto and Europa will simultaneously cast their inky shadows on Jupiter's cloudtops. This is called a "triple shadow transit," and it is rare. The timing favors observers in North America where the planet will be shining high in the sky in the constellation Leo. Anyone with a backyard telescope is encouraged to watch this easy-to-observe event. (Advice: Start watching at least 30 minutes ahead of time.)(Courtesy Spaceweather.com) 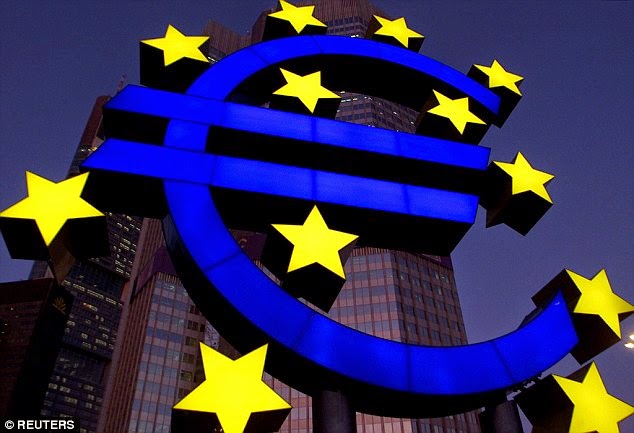 Trouble ahead: The Swiss central bank abandoned efforts to stop its currency rising against the euro
Read more: http://www.thisismoney.co.uk/money/comment/article-2914656/SIMON-WATKINS-Decision-let-franc-float-clear-signal-Switzerland-expects-massive-pressure-euro.html#ixzz3PArh8ovu
Follow us: @MailOnline on Twitter | DailyMail on Facebook

By SIMON WATKINS FOR THE DAILY MAIL
PUBLISHED: 22:03, 17 January 2015 | UPDATED: 22:11, 17 January 2015
Read more: http://www.thisismoney.co.uk/money/comment/article-2914656/SIMON-WATKINS-Decision-let-franc-float-clear-signal-Switzerland-expects-massive-pressure-euro.html#ixzz3PAqq5Qee
Follow us: @MailOnline on Twitter | DailyMail on Facebook
Europe could be on the brink of a fresh financial crisis. A storm of economic and political events is gathering which at the very least will set financial markets into a flurry and could create new threats to recovery across the region. Britain will not be free from its effects.
The unprecedented jump in the Swiss franc last week was the clearest symptom. The Swiss central bank abandoned efforts to stop its currency rising against the euro.
Its previous policy had been to try to stop cash flooding into Switzerland from other European countries. Its decision to let the franc float represents a sudden, unexpected abandonment of that policy. It is also a clear signal that Switzerland expects massive pressure on the euro
Read more: http://www.thisismoney.co.uk/money/comment/article-2914656/SIMON-WATKINS-Decision-let-franc-float-clear-signal-Switzerland-expects-massive-pressure-euro.html#ixzz3PAtNzOx2
Follow us: @MailOnline on Twitter | DailyMail on Facebook
ASTEROID FLY JANUARY 26 2016. 4mins
6 mins.
Russel Brand  ---- a good 8 mins.
A shock--- wow and good grief.15 mins
Mass Extinction.  This backs up my theories to a point or so.  I have espoused for a long time that climate change is cyclic and is backed by some NASA SCIENTISTS AND ASTRONAUTS SEE LAST POST.
So you want to go to Mars?  11 mins.
http://articles.mercola.com/sites/articles/archive/2015/01/24/hibernation.aspx?e_cid=20150124Z2_DNL_RTLC_art_2&utm_source=dnl&utm_medium=email
A fascinating on animal hibernation(courtesy of
mercola.com) 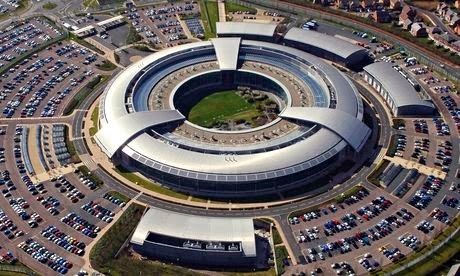 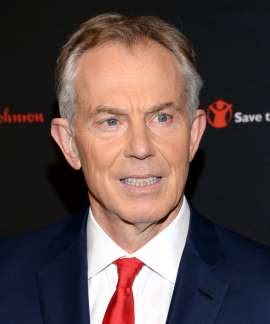 Blair next head of the Bugs.
http://www.msn.com/en-gb/news/uknews/revealed-how-blair-colluded-with-gaddafi-regime-in-secret/ar-AA8vS8v?ocid=mailsignoutmd
Read this article and be astounded. 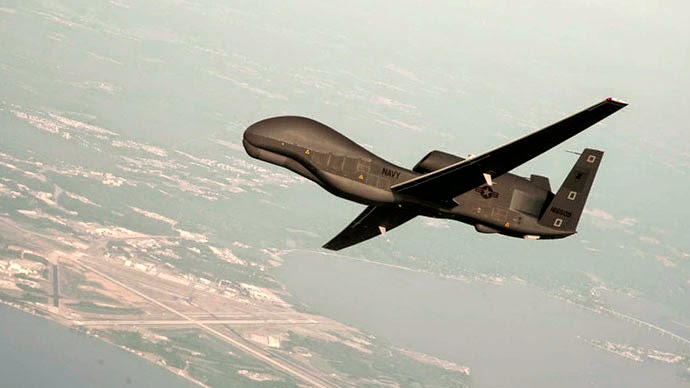 This is the drone operators voice and confession. I truly hope he is not taken out.
http://rt.com/news/225751-psaki-rt-isis-bbg/
This very, very, very, interesting, there are some interesting videos in this link above. The USA is worried over the popularity of RT and the like, this is why they are trying hard to get the Net shut down and make it offence to look at these broadcasts.  The so called slow lane.  The Chief said that RT, Boko Harem and IS were in the same sort of boat, caused an uproar see the short videos above. It is interesting that illuminati Cameron met illuminati Obama to see if they could snoop and spy more.
http://www.ndtv.com/article/world/barack-obama-british-prime-minister-meet-amid-specter-of-terrorism-in-europe-us-64957


Chronic Disease Has Risen in Lockstep with sugar Consumption

However we can be sweet in thoughts deeds and charity.
Keep Sweet, Be Well.  Geoff
Posted by GEOFF FREED ONLINE at 00:50