Hi again.  One wonders about wonders. Often we pass them by or have become so familiar with them that they become second nature, this is a side effect of familiarity, it can breed insensitivity or taking things for granted perhaps some of the contents in this Post may stimulate the curiosity and restore wonder.
EARTH'S MAGNETIC FIELD RINGS LIKE A BELL: In the Lofoten Islands of Norway, Spaceweather.com reader Rob Stammes operates a magnetic observatory. Twenty-four hours a day, he measures the strength and direction of the local magnetic field as well as electrical currents running through the ground. During geomagnetic storms, his chart recordings go haywire. On Jan. 13th, something different happened. They rang like a bell:

"For about an hour, electrical currents in the ground beneath my observatory flowed back and forth with a sinusoidal period near 2 minutes," says Stammes. "This is rare."
These are natural ultra-low frequency oscillations known to researchers as "pulsations continuous" (Pc). The physics is familiar to anyone who has studied bells or resonant cavities. Earth's magnetic field carves out a cavity in the surrounding solar wind. Gusts of solar wind can make the cavity "ring" akin to a bell (references: #1, #2, #3). Human ears cannot hear this ringing; it is electromagnetic rather than acoustic. The physical effect is felt beneath our feet. As the cavity vibrates, magnetic fields swing back and forth, causing electrical currents to flow through the ground below.
The Pc waves Stammes detected are a variety known as Pc4, which oscillate in the frequency range 6.7–22 mHz. Such waves are good at energizing particles trapped in Earth's magnetic field and often cause local outbursts of bright auroras. (GRATEFUL THANKS TO ROB STAMMES AND  spaceweather.com)

A new and refreshing kinda of You Tube. 15 mins
2 mins.
Mother Whale lifting her baby to see humans in a boat.  2 mins
Its wonderful how so many people shout with joy when they see and touch whales and dolphins.  They are so beautiful.
Were we created by Aliens?  7 mins
In the Grid I blogged about the tree of life in Genesis bing the human Genome, the snake the DNA spiral and the apple the chemical formula administered to an Life form. 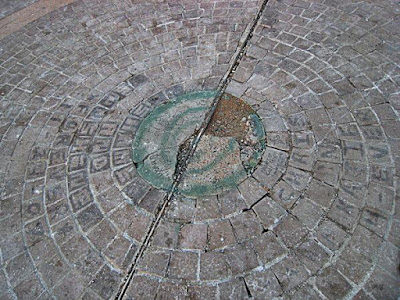 Our world is full of unexplainable things.
We try our best to explain life and our surroundings by use of modern science, or when we don’t know, we can use the “act of god” clause.
This location dubbed “the center of the universe” falls into that unexplainable category. At first glance, it appears like it’s nothing special.
Just an ordinary circle.
However, stand in the middle of it and make a sound and it will appear as though the sound is reflected back at you amplified and from all directions.
The circle of concrete surrounded by bricks seems to act as a mysterious cone of silence because strongly enough no one outside of it can here the sounds made inside.
Just the person in the middle hearing their voice reflected loudly back at them. Legend has it that a foghorn could go off in the circle and not a soul outside of it could do here it.
This truly is one of the world’s greatest mysteries! Nobody knows why this happens. It’s a really strange phenomenon!
Source: Disclose
This article (They Call THIS Place ‘The Center Of The Universe’ Because Of One Unexplainable Phenomenon! ) is free and open source. You have permission to republish this article under a Creative Commons license with full attribution and a link to the original source on Disclose.tv READ MORE: http://www.disclose.tv/news/they_call_this_place_the_center_of_the_universe_because_of_one_unexplainable_phenomenon/137624
Romanian General confirms reptilians 5 mins.
There are some explanations to this phenomena which might be worth exploring; I have said that the 'old brain' at the back of the cranium maybe activated by some trigger or chemical input, or the elite playing around with frequencies through mobile phones and so on.
Then there is the Karl H Pribram theory of the Holographic brain;
Pribram's holonomic model of brain processing is described in his 1991 "Brain and Perception", which contains the extension of his work with David Bohm. It states that, in addition to the circuitry accomplished by the large fiber tracts in the brain, processing also occurs in webs of fine fiber branches (for instance, dendrites) that form webs, as well as in the dynamic electrical fields that surround these dendritic "trees". In addition, the processing occurring around these dendritic trees can influence that occurring in those trees of nearby neurons whose dendrites are entangled but not in direct contact. In this way, processing in the brain can occur in a non-localized manner. This type of processing is properly described by Dennis Gabor, the inventor of hologram, as quanta of information he called a "holon", an energy-based concept of information. These wavelets[clarification needed] are used in quantum holography, the basis of MRI, PET scans and other image processing procedures[citation needed].

Gabor wavelets are windowed Fourier transforms that convert complex spatial (and temporal) patterns into component waves whose amplitudes at their intersections become reinforced or diminished[jargon]. Fourier processes are the basis of holography. Holograms can correlate and store a huge amount of information - and have the advantage that the inverse transform returns the results of correlation into the spatial and temporal patterns that guide us in navigating our universe.
David Bohm had suggested that were we to view the cosmos without the lenses that outfit our telescopes, the universe would appear to us as a hologram. Pribram extended this insight by noting that were we deprived of the lenses of our eyes and the lens-like processes of our other sensory receptors, we would be immersed in holographic experiences. ( Courtesy WIKIPEDIA)
Then there is the possibility of a contrived 'hoax' or a real hoax.  In my UFO story in the Grid May 2005 I stated that the powers to be used real appearing costumes in order to throw the population into confusion, fear and a cover up for abducting people for genetic research and the like, or it may have been a a couple of guys doing a prank and finally it is a fact they are here.
The Green Screen suggest to me a holographic projection from the back seat of the vehicle. A researcher I knew had a similar incident with 'men in black' and a family who lived near Margate in the UK and an airport with strange goings on, all in the grid way back, and much more on that incident.
Large ancient Pyramid found in Romania.  6 mins Let us hope and pray this happens. Not wanting to sour the proceedings can you imagine that large corporations with their voracious appetite for wealth and power giving this the nod of approval. If you research many inventors have made fusion and have either been bought off, killed or just so scared by the threats have slunk away----can you blame them?

Apparent killing of a man who exposed the CIA and Fake News.12 mins

Older people who are taking five or more prescription drugs are 1.5 times more likely to be frail—which can increase the likelihood of falling or suffering disabilities—than someone taking fewer medications every day. People taking 10 or more drugs a day double their risk of a fall.
Taking five or more drugs a day is known as polypharmacy, and doctors don’t understand the interaction between the different chemical compounds, say researchers.
A research team from the German Cancer Research Centre in Heidelberg reviewed the amount of prescription drugs a group of 3,058 older people in care homes were being given. Nearly 40 per cent were taking five or more drugs a day, and 9 per cent were taking more than 10 drugs.
In the three years of the study, 186 people became unsteady on their feet, and the risk was far higher in those taking five or more drugs every day. (COURTESY WDDTY)
Foreign particles are getting into routine vaccinations in the manufacturing process—and the contaminations could explain the increase in adverse reactions to many common vaccines, such as the HPV and the MMR, say scientists.

The contaminants aren’t breaking down in the body, and they could be making their way to tissues and organs and causing chronic inflammation. Recently reported reactions—from fever, epilepsy, speech loss, muscle pain, walking problems and hypersensitivity—could all be explained by contamination.
Scientists at the National Council of Research in Italy tested 44 routine vaccines—which included the MMR (measles-mumps-rubella), the HPV (human papilloma virus), several flu vaccines, and the DTP (diphtheria-tetanus-pertussis)—and discovered that all of them had some contamination, and several had up to 20 foreign particles.
The contaminations were discovered by using sensing equipment that was far more sensitive than anything used in quality control checks at the manufacturing plants.
The scientists say they were baffled by their discovery, and assume that the contamination must be happening somewhere along the production cycle.
The contaminants are being carried around the body in the bloodstream, so it can be hit-or-miss whether they cause a reaction in the individual, depending on where in the body they eventually settle. Even if there is no obvious reaction, the particles could persist in the body for a very long time because they are not bio-degradable.
The researchers accept that the drug companies responsible for the vaccines are not aware of the contamination, and this could explain why so many reactions are not appearing on the vaccine information sheets.(Courtesy  WDDTY).

Be Well.   Geoff
I will publish two more SHACK----shackisback.blogspot.com
some browsers will only allow shackisback.blogspot.co.uk
Forgive my impertinence and trust I do not insult  you or
belittle you some folk cannot get SHACK because they
are using the search engine and not the address bar. Forgive me for those who are computer skilled, the search engine like Google, Ecosia and so on is usually in the middle of a desk top screen, the address bar at the top.  Apologies.  I am not
that great with computers either, I get stuck and have to go for help, luckily help is at hand.

Posted by GEOFF FREED ONLINE at 03:50