Hi there.  It's back again, the populace keep pressing for disclosure, let's hope it arrives soon and it looks like another messy year.  This is all tied up with the Antarctic stuff I have done in full back in the Grid and this site.   Important Big Pharma and Trump video at the bottom.

USA secret space programme.  UFO and ET again.3 mins
Ancint atomic war----did they have atomic weaponry?  3 mins
This is really old news many including myself have Posted and blogged way, way back on this and detail descriptions can be found in the Vedas and Sutras also the translations of the Sumerian hieroglyphics ---- a good reference  is Zachariah Sitchin's book 'The Twelfth Planet' the book is great I did have correspondence with Prof. Sitchin as I had a another view about the thttps://youtu.be/GsMiOxhKfTslanet but very strong agreed about the Twelfth Planet however very,very strongly agreed about the DNA UPGRADE and its administration and I linked it to the story of Adam and Eve and so on----way way back. Had doubts Twelfth Planet Origin---I found another source for this.
Life on Venus?  2 mins
A  TED TALK PRESENTATION-----the most mysterious star by an Astronomer.  14 mins
OOps well I never-----make up your mind time? 15 mins
In 2006 I ran this in the grid and now it has resurfaced. 4 mins
The Edwards Base Incident. 40 mins
Antarctica again, 2 mins

RADIATION CLOUDS AT AVIATION ALTITUDES: A new study published in the peer-reviewed journal Space Weather reports the discovery of radiation "clouds" at aviation altitudes. When airplanes fly through these clouds, dose rates of cosmic radiation normally absorbed by air travelers can double or more.
"We have flown radiation sensors onboard 264 research flights at altitudes as high as 17.3 km (56,700 ft) from 2013 to 2017," says Kent Tobiska, lead author of the paper and PI of the NASA-supported program Automated Radiation Measurements for Aerospace Safety (ARMAS). "On at least six occasions, our sensors have recorded surges in ionizing radiation that we interpret as analogous to localized clouds."
The fact that air travelers absorb radiation is not news.  Researchers have long known that cosmic rays crashing into Earth's atmosphere create a spray of secondary particles such as neutrons, protons, electrons, X-rays and gamma-rays that penetrate aircraft.  100,000 mile frequent flyers absorb as much radiation as 20 chest X-rays—and even a single flight across the USA can expose a traveler to more radiation than a dental X-ray.
Conventional wisdom says that dose rates should vary smoothly with latitude and longitude and the height of the aircraft.  Any changes as a plane navigates airspace should be gradual.  Tobiska and colleagues have found something quite different, however: Sometimes dose rates skyrocket for no apparent reason.
"We were quite surprised to see this," says Tobiska.
All of the surges they observed occurred at relatively high latitudes, well above 50 degrees in both hemispheres. One example offered in their paper is typical: On Oct 3, 2015, an NSF/NCAR research aircraft took off from southern Chile and flew south to measure the thickness of the Antarctic ice shelf.  Onboard, the ARMAS flight module recorded a 2x increase in ionizing radiation for about 30 minutes while the plane flew 11 km (36,000 feet) over the Antarctic Peninsula.  No solar storm was in progress.  The plane did not abruptly change direction or altitude.  Nevertheless, the ambient radiation environment changed sharply. Similar episodes have occurred off the coast of Washington state.

Above: Radiation measurements made by ARMAS while flying over Antarctica. The colored points are from ARMAS. The black points are from a NASA computer model (NAIRAS) predicting radiation dose rates. Throughout the flight, ARMAS observed higher dose rates than predicted by the model, including a surge highlighted in pink.
What's going on?
"We're not sure," says Tobiska, "but we have an idea."
Earth's magnetic field, he explains, traps many cosmic rays and solar energetic particles in structures called "magnetic bottles."  These bottles can be leaky.  Even minor gusts of solar wind can cause the trapped particles to squirt out the ends of the bottle, sending beams of particles down toward the Earth below.
"Basically, we think we might be flying through some of these leaky particle beams," says Tobiska.
Tobiska notes that a team of South Korean researchers has observed similar variations in radiation while flying sensors onboard a military aircraft near the border between the two Koreas (Lee et al 2015).  If the phenomena are the same, the Korean measurements would suggest that "radiation clouds" may exist at middle latitudes, too.
The ARMAS program has a busy flight schedule in 2017. "We'll be looking carefully for more 'clouds' as we continue to characterize the radiation environment at aviation altitudes," says Tobiska.
Stay tuned for updates and, meanwhile, read Tobiska et al's original research at this URL:  http://onlinelibrary.wiley.com/doi/10.1002/2016SW001419/abstract
Sharable permalink to this article: Radiation Clouds at Aviation Altitudes (huge grateful thanks to spaceweathter.com and Kent Tobiska)
NASA  and spaceweather effects in aviation  5 mins.
This is where NASA really are great.
Mystery at Tunguska in Russia in 1908  1hr.20 mins
I have written a lot about this in the Grid---several newspaper reports which I had put in the grid from those days of local people in Huntingtonshire UK  describe what they saw as pass over the UK. They described a huge front of ship like a nose cone with figures in it.
Alien Abduction.  Make up your mind time?  6 mins
BIG PHARMA ON ALERT-----PLEASE BE CAREFUL MR PRESIDENT ---- my experiences with the elite is that they have no morals they are  amoral. 6 mins
Be Well. Geoff
ADDENDUM
http://topsecretinfoexposed.com/extraterrestrials-sunburns-prove-expert-say/
Scroll down to this image below and read on in Post 2 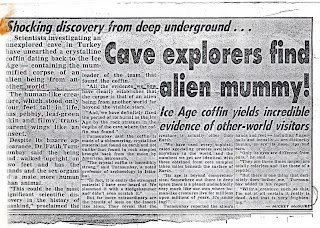 
Many readers have emailed me and said we think SHACK  is you, my friends agree that I should say who Shack is.
Well the truth is Shack is myself Geoff Freed.
This is the other side of me.  Forgive me it was not meant as a deception, the truth is I was a bit shy.  I do hope you will forgive me. Eventually I will move to Shack only as the news is often the same old same old.  Not for some time foreseeable yet.

Posted by GEOFF FREED ONLINE at 04:09