Hello again These images are from the link below and my explanation follows them all, so please scroll down.
https://apod.nasa.gov/apod/astropix.html?

It does change and move 06 /08/18
Explanation: Cosmic rays from outer space go through your body every second. Typically, they do you no harm. The featured image shows some of these fast moving particles as streaks going through Fermilab's NOvA Far Detector located in Ash River, Minnesota, USA. Although the image updates every 15 seconds, it only shows cosmic rays that occurred over a (changing) small fraction of that time, and mostly shows only one type of particle: muons. The NOvA Far Detector's main purpose is not to detect cosmic rays, though, but rather neutrinos from the NuMI beam shot through the Earth from Fermilab near Chicago, Illinois, USA, 810 kilometers away. Only a few neutrino events are expected in NOvA per week, though. The NuMI / NOvA experiment is allowing humanity to better explore the nature of neutrinos, for example how frequently they change type during their trip. Cosmic rays themselves were discovered only about 100 years ago and can not only alter computer memory, but may have helped to create DNA mutations that resulted in, eventually, humans.
Brilliant DNA Presentation 4 mins

Explanation: Every living thing on planet Earth is defined by its own molecule -- what's yours? This molecule, called DNA, spans about two meters stretched out but is coiled into every cell in your body. The many copies of DNA that compose you were all copied from one single cell, and your body is continually making new copies. The above ground-breaking animated video depicts the tiny, amazing, bio-molecular machinery that makes these DNA copies. For a fee, it is now possible to find part of all of the code of the DNA molecule that defines you, but lively debatesinvolving ethics may arise regarding whether you or anyone may own, disclose, patent, or copyright it. No one knows if DNA-like molecules will also define life that originates outside of Earth.  FROM APOD ABOVE 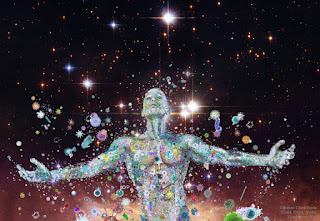 August 15 2016
Human as Spaceship
Space Image Credit: NASA, ESA, Hubble, and J. Maiz- Apellániz (IAA); Acknowledgement: D. De Martin;
Human Image Copyright: Charis Tsevis; Composition: R. J. Nemiroff
Human as Spaceship
Explanation: You are a spaceship soaring through the universe. So is your dog. We all carry with us trillions of microorganisms as we go through life. These multitudes of bacteria, fungi, andarchaea have different DNA than you. Collectively called your microbiome, your shipmates outnumber your own cells. Your crew members form communities, help digest food, engage in battlesagainst intruders, and sometimes commute on a liquid superhighway from one end of your body to the other. Much of what your microbiome does, however, remains unknown. You are thecaptain, but being nice to your crew may allow you to explore more of your local cosmo

(all of these are from https://apod.nasa.gov/apod/astropix.html? above and I extend great appreciation for these, like spaceweather.com I merely use these to illustrate my own view and theories and I am not in contact or collaborate with either of the above. I ALSO do not get paid or any other remuneration from any other source or the above and my views are my own and I could be wrong and I am in no way connected to main stream science any more and my degrees are not valid to main stream science academia although when they were taken they were valid. Main stream science may or not agree with anything in my POSTS or Blogs. You dear reader will have to make up your own mind, but I beseech you do your own research, many thanks. 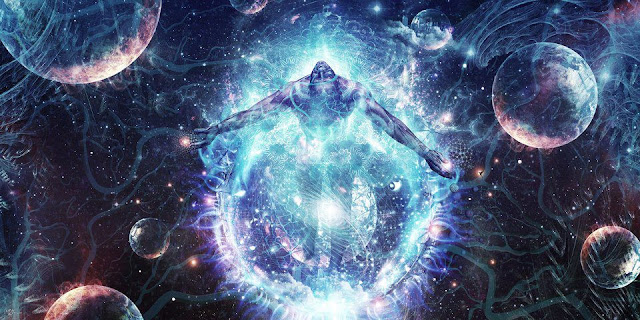 From the above APOD definitions and explanations I would like to express the views that I have; as one can see the replication of the DNA it is a delicate and complex process and things like cell / mobile phones may well interfere with this by causing stray unlike micro frequencies that the body does not recognise and so cause an allergic response and eventually illness. Then there is the usual chemtrails, GMO foods, additives and preservatives and so on.

I feel that the Universe is a vibrant, frequency wave in its mode of energy output and the Cosmos transforms the Cosmic Rays to be commensurate with the form it is upgrading and reconfiguring.
The rays are carrier waves of information and the waves are then decoded as in TV and similar appliances and in humans by the brain. The brain is an amazing organic decoder and does other functions as well. The brain decodes the signals and frequencies and translates them into holographic presentations which we feel as reality and solid, however on close observation and into quantum physics and the nature of particles, atoms, molecules they  are not be as solid as they appear and actually have an extended dream like illusionary quality.

Over the history of the Universe I feel that evolution is brought about by a slow incremental build up. Then it culminates in major detoxification or ‘wipe out’ as the forms reach their maximum efficiency. Like the snake shedding its skin, the crab its carapace, the caterpillar / chrysalis / butterfly and the human from embryo foetus, baby, child, adult, senior through to death (actually there is no death just another 'shedding of a skin', this time the human body and then to another form).  For this to be organically done the exchange has to be as natural as possible, food in excretion out, mind clogged by culture and dogma, brain washed hardly grows.

Now is the time which the building increments are near to whatever was intended and no longer serves purpose, so a radical cleansing is taking place. Back POSTS will go into detail and wipe out could take place unless humankind wakes up from the present hypnotic trance.  So the next human, fauna, plant, fish, bird, insect and so on is waiting  in the wings. Just when they will appear on stage is up to the ratio and proportion to the awakening and hopefully the critical mass of 65% of the world’s population can achieve this, if all goes well 2075 should be the gaol with significant evidence in 2032, however lurking in the wings are the opposition, the power hungry, the greedy, those stuck in their local beliefs by culture, war, politics, trauma, austerity and a host of other kinks and brain washed idealism, mine as well some readers would say and whose to say they are not right in their assumption.

Go Well and Be Well


SOLAR MINIMUM CONDITIONS ARE IN EFFECT: The sun has been without sunspots for 45 of the past 48 days. To find a similar stretch of blank suns, you have to go back to 2009 when the sun was experiencing the deepest solar minimum in a century. Solar minimum has returned, bringing extra cosmic rays, long-lasting holes in the sun's atmosphere, and strangely pink auroras. Free:Aurora alert (Courtesy spaceweather.com)
THIS JUST SHOWS YOU WHAT JOUNALISM HAS SUNK TOO.

HAVE FUN AND BE WELL

Posted by GEOFF FREED ONLINE at 02:39