Welcome. Here are a few points to probably make one think or feel its all happening so fast, it can make one's head reel and cause some anxiety, disorientation and want to run away and distract, however in the middle of a cyclone, a hurricane there is a center of quiet. 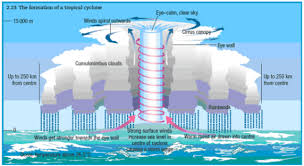 The eye as above is a centre of calm and to me in the mental, psychological world of today with its hurly- burly frenzied shark like eating frenzy activity and its political, environmental and personal privacy and where do I stand in the midst of all this and am I not my own thoughts or a digital imposed brain targeted downloaded being and indeed am I a being or so memorised with implanted thoughts that I might have been downloaded onto a hardrive or been 'cyborged' already mated or welded or electronically downloaded and put into a circuit board and part of a sophisticated fibre optic robot and not know it.
It is vital to see these agonising and perplexing thoughts are like whirling (like the  Dervishes)of clouds and by analogy the whirligig of madness, crime, war, political and all that is rushing around in one's brain and head, tantalising and bemusing, so halt, stop, focus, breathe slowly, relax by sensing and feeling all the body limbs and organs let go of restriction, then look inwardly at the racing images and feelings and find the centre which is one's attention in a relaxed way but focused and not attempting to wilfully stop the mad carousel and a rapid conveyor belt of racing torrents of thoughts, that's noisy and agitating, breathe, slow even breaths, and as the carousel slows down be the centre and let the whirling eddy disturbance and perturbations fade away and know that one is the calm and not the raging storms of torrid raging ego minds of countless  rages and ages.
WHOSE BRAIN
Rising sea levels due to climate change has been thoroughly debunked by top scientists, but this doesn’t change the scare-mongering rhetoric to drive massive spending to stop it.
In 2009, the Telegraph headlined Rise of sea levels is ‘the greatest lie ever told’ and wrote:
“But if there is one scientist who knows more about sea levels than anyone else in the world it is the Swedish geologist and physicist Nils-Axel Mörner, formerly chairman of the INQUA International Commission on Sea Level Change. And the uncompromising verdict of Dr Mörner, who for 35 years has been using every known scientific method to study sea levels all over the globe, is that all this talk about the sea rising is nothing but a colossal scare story.“
In other words, the claim that there is “scientific consensus” on rising sea levels is completely fabricated in order to drive Sustainable Development, aka Technocracy. ⁃ TN Editor

China, India, Iran, Russia, Japan, USA and European nations are actively working to improve existing electroencephalography, magnetic resonance, functional infrared, and the magnetic encephalography spectrums to develop future military applications. The US Air Force believes BCI interfaces could provide faster reaction times for firing missiles, drones and guns.
There are many dramatic advances in mind-reading which uses BCI (Brain-Computer Interfaces) to decode brain states to reconstruct what a subject is experiencing. There is a growing market for computer game and devices that are controlled by brain states (http://www.bcireview.com/). Wireless technology has made it possible to record from mobile humans.
BCI have been used to replace lost sensory interfaces. Cochlear implants were developed in the 1970s and over 219,000 people worldwide have received cochlear implants. Progress has been made on retinal and cortical implants to restore sight in blind patients. Blind patients have reported substantial “sight” using a camera to activate an array of electrodes on the tongue, one of the most sensitive sensory surfaces of the body.
The Tech giants and militaries around the world will be deploying this rapidly advancing versions of technology from now through 2035. Military think tanks are assuming this will be a dominant interface and highly impactful by 2030.
A modern-day is attempting to rise off the desert floor in the , intentionally built from the ground up with latest technology that will be run by robots and AI. ⁃ TN Editor 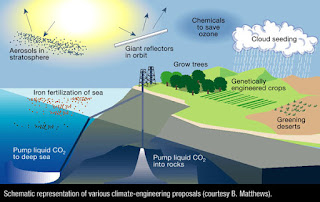 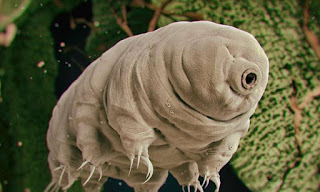 Tardigrade
Moon older by 150 million years (Scientists have found out--what next is older, new and ?)
Tardigrades keep popping up in scientific discussions because they’re Earth’s hardiest life-form. Also called water bears, or moss piglets, tardigrades are tiny animals that can withstand extreme temperatures, extreme dryness, and lack of food. They can withstand both the vacuum of space, and pressure as powerful as that at the deepest point in Earth’s oceans. If that isn’t enough to crown them as Earth’s toughest creature, they’re also resistant to radiation.
Tardigrades can survive dry periods by curling up into a little ball called a tun. Tun formation requires metabolism and synthesis of a protective sugar known as trehalose, which moves into the cells and replaces lost water. While in a tun, their metabolism can lower to less than 0.01% of normal.7 Jun 2017
Could this be a deliberate attempt to start life going on the Moon and the Beresheet also is the first book of the Bible in the 'Five Books of Moses' ('Pentateuch) and the first verse goes(http://www.vatican.va/archive/bible/genesis/documents/bible_genesis_en.html) much the same in King James  version and New English translations.
It is terraforming(Terraforming or terraformation (literally, "Earth-shaping") of a planet, moon, or other body is the hypothetical process of deliberately modifying its atmosphere, temperature, surface topography or ecology to be similar to the environment of Earth to make it habitable by Earth-like life.) I would suggest as the temperatures on the Moon are so cold and then hot the condensation on the metals of the 'crashed' craft could well keep the tardigrade's alive and thriving. Supposing that scientists have or will find a way of inserting bacteria into the body's of tardigrade's and act as a host breeding womb or even seeds and flora for experimental terraforming?  Hmmm.  Mars is better and it is rumoured that the 'space Fleet' hinted  at and suggested by Dark Journalist and others that regular visits take place monthly or even weekly!!!?

Is this some other 'secret 'plan or agenda to move to the Moon and instead of just living in 'space domes' and maybe for a while, while the boffins terraform and eventually the little tardigrades survive and their genetic structure their genome transferred by the technique already described back in POST
275 11 August 2016 Re the Phantom Wave by Dr Peter Gariaev already two vital and most important videos accompanying this POST have been taken away, they are there but are not allowed, SO ABSOLUTELY  VITAL  are his finding that if his video is taken down you can get the full details of his work in the 'Source Field Investigations' by David Wilcock ( although David has received some bad press this book is a scientific rare information source and is not his mind inspirations and downloads, I suspect as Google, Facebook and Twitter alias CIA and the internet of everything, like in the days of Hitler and other Despotic regimes as are the so called elites, Bilderberg's, Technocrats or One World bods, will not allow reprints or publishing of anything not in line with the politic of the world government in making enabled by 5G and the Internet of Everything. 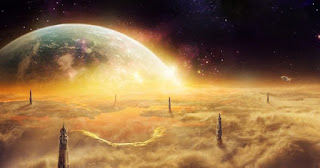 10 MINUTES OF BRILLIANCE FROM DAVID IKE


http://endoftheamericandream.com/archives/the-pope-and-islams-most-important-imam-just-signed-a-covenant-that-pushes-us-much-closer-to-a-one-world-religion
Now we have the one world religion, one world currency, one world surveillance and it is all there in the 'internet of everything'
https://www.sfgate.com/news/article/Doorbell-camera-firm-Ring-has-partnered-with-400-14383981.php
Wow an absolute mind bender; the camera on your front door is a snitch on your neighbours and loiterers, OK may help with burglars, mugging but with CCTV and soon 5G on every lamppost, your Smart Meter and every digital device in your street, car, house, computer, TV and more, yes your digital watch, so ask yourselves how many times must or you are spied upon and dear old Astra / Aura / Alexa and its listening to your conversations or Amazon's'Echo'and all being kept and learning about your routines, your habits and privacy, did I say privacy!!!?  Digital stuff in cars see back POST Mercedes and its 'Echo' like advice and so on and your soon to be map finders and route searches and so on, getting an idea for transport and the ever dependency on cars and clogged roads---where does it stop, soon every 60,000 trillions cells will be monitored not so much individual but by implants----in Sweden of all places they give parties to celebrate your implant;
https://www.npr.org/2018/10/22/658808705/thousands-of-swedes-are-inserting-microchips-under-their-skin?t=1567093623100
There is much more and as the POST TITLE SAYS; change-new-fast
They say it cannot be hacked; I have a notion that  some bright somebody will find a way and start to blackmail, stalk or just  be nosy, the Swedish people will come to regret this as their privacy is collected by the digital device they are assessing and it will all go back to the 'internet of everything' which will make them part of the world wide net, everything about them will be known, and eventually Sweden will not only become a smart City but a Smart Nation.
Every time like Catholics and Muslims converge and we get nearer to a ONE WORLD THIS OR THAT, more human rights fall, choices are eroded. What next?; one world currency, one world food, one world thought and philosophy?

Here is an interesting thought; BRICS which are Brazil, Russia, India, China, South Africa and a few other countries are endeavouring to start a New International Monetary Fund based on the Chinese Yuan, however they also want to have their own Internet, their own cell / mobile phone network. Oh boy, not only a trade war but and internet competitor.This could help stop or falter the 'internet of everything' to the internet of the West based on the  petrol dollar and outright capitalism and force regime change.

Then we arrive at;
https://www.nortonrosefulbright.com/en/knowledge/publications/d2e05e9f/the-belt-road-initiative---a-modern-day-silk-road
The aim so far is not domination but economic freedom and trade so that the countries it is envisaged to go through(see link) above will take many out of poverty. Yes it may, how about the environment and raping the planet of its resources. There are ways to do this with no harm or very little by adopting various innovative ways and not using fertilisers but using natural methods such as Holland has done for example;
https://www.nationalgeographic.com/magazine/2017/09/holland-agriculture-sustainable-farming/
There are many more sustainable ways, lots and lots. It is economical and viable and can feed more and everyone can benefit.
The Western philosophy of raid, regime change, austerity breeds war and asylum seekers and refugee camps, broken families and the wealth going to a few, it is more compassionate to have shared wealth, in fact  so wealth that peace may come through sharing and the addiction to extreme hoarding and acquisitiveness would leave people in peace and peace makes for compassion and understanding.

I have a feeling that a world currency will not come about and more bartering, sharing with a delight in the diversity of life and not a one world dictum and lack of choice and creativity and not be implanted and yes maybe in an accident a robotic hand or foot but science to be in harmony with nature.

A world that works for everyone everywhere.