Hi there, Hope all is well with you.
A very important aspect of our lives, electro sensitivity. 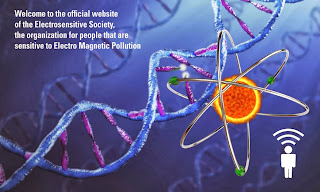 http://www.electrosensitivesociety.com/
I just hope and pray that Dr Sinatra's view of the future comes about---please would you kindly join me in supporting his vision.

THIS COMET IS BRIGHTER THAN : Comet is getting all the press, but another comet is outshining the media-favorite by nearly an order of magnitude. Comet Lovejoy (C/2013 R1) is almost 10 times brighter than Comet as it passes just outside the orbit of Earth in mid-November: 3D orbit. Rolando Ligustri took this picture of Comet Lovejoy on November 12th using a remotely-controlled telescope in : 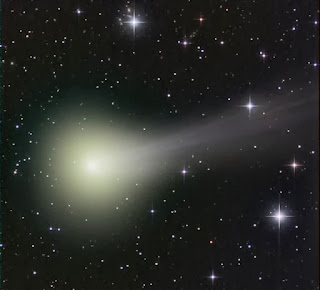 The comet's pale green atmosphere is almost twice as wide as the planet Jupiter, and there are no fewer than three tails streaming behind the comet's nucleus. Sky watchers in dark sky sites say that can now see this lovely comet as a faint smudge using averted vision--no optics required. A telescope is, however, recommended.
Comet Lovejoy is one of four comets now rising in the east before dawn. The other three are exploding Comet LINEAR X1, sungrazing Comet ISON, and short-periodComet Encke, and the brightest of them all. All four are easy targets for backyard optics. Dates of special interest include Nov. 15-18 when Comet LINEAR X1 passes by the bright star Arcturus, Nov 17-18 when Comet ISON has a close encounter with Spica, and Nov. 18-20 when Comet Encke buzzes Mercury. These stars and planets make excellent naked-eye guideposts for finding the comets. Meanwhile, bright Comet Lovejoy is approaching the Big Dipper; if you can't see it with your unaided eye, a quick scan with binoculars will reveal it. 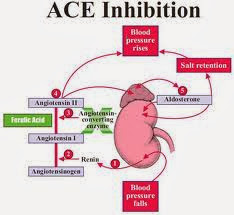 ACE drugs cause life-threatening kidney failure
ACE inhibitors—drugs for lowering blood pressure—are a major cause of life-threatening kidney failure. They could be responsible for 15 per cent of all cases of kidney injuries, researchers estimate.
It’s always been suspected that the ACE (angiotensin receptor antagonists) drugs might cause kidney injury and failure, but nobody was sure how bad the problem might be.
So researchers from looked at two years, 2007 and 2010, and compared the level of prescribing to hospital admissions for kidney injury. ACE prescriptions suddenly increased by 16 per cent in 2010 in the , and there was a 52 per cent increase in hospital admissions for acute kidney injury that year, too. They reckon that 1,636 of the admissions in 2010 could have been avoided had doctors kept to prescribing levels of 2007.
The researchers estimate that the ACE drugs could be responsible for one in seven cases—or nearly 15 per cent—of kidney injury.
Around 30 per cent of the patients die from kidney failure. ACE inhibitors are the world’s second most-commonly prescribed, used to treat blood pressure, heart disease and—ironically—kidney failure.
(Source: PLoS , 2013; 8: e78465)
(Courtesy of WDDTY)

Zinc is one of the very best anti-bacterial agents around—and scientists have discovered this week how it works, even against some of the deadliest bacteria that cause pneumonia and meningitis.
The essential mineral starves the bacteria by blocking its ability to scavenge for manganese in the body, which weakens it and makes the job of the immune system so much easier.
Scientists at the University of Adelaide have observed the way that zinc interplays with one of the deadliest bacteria, Streptococcus pneumoniae, which kills more than one million people a year by causing pneumonia, meningitis and other serious infectious diseases.
But the bacteria need to feed off manganese, an essential metal, in order to thrive and attack the body. Zinc interferes with that process, and stops manganese reaching the bacteria.
(Source: Nature Chemical Biology, 2013; doi: 10.1038/nchembio.1382)
Flu shot? Try a Japanese pickle instead
Flu season is with us—but if you’re hesitating over having the usual flu shot, try a Japanese superfood instead. The suguki pickle has proved itself to be a natural flu preventive and can even protect against H1N1 swine flu and a new deadly strain that has emerged in , researchers say this week.
Suguki, a pickled turnip, contains the bacteria Lactobacillus brevis, which protect us against a variety of flu strains by boosting the immune system’s own antibodies. In laboratory tests, the bacteria in the pickle successfully killed off the H1N1 swine flu and the new, and deadly, H7N9, flu viruses.
Japanese researchers aren’t quite sure why the bacteria are such an efficient flu fighter, but they are coated with sugars that protect them from the stomach’s acids that usually kill off bacteria.
Thus far, Lactobacillus brevis has been tested only on laboratory mice, and so researchers aren’t sure yet whether it will also be effective in humans, although clinical trials—using a probiotic drink that includes the bacteria—are under way.
(Source: Letters in Applied Microbiology, 2013; doi: 10.1111/lam.12160)


·                By taking the time to do balance, strength training and other exercises on a regular basis you can keep your sense of balance strong, help restore what's already been lost and even lower your risk of getting injured if you do fall

The more I look at the world we live in, the crazier and useless it seems.  Nature seems the only reality. This song and its graphics and photos epitomise my state of mind at the moment. Just keep walking.
I occasionally walk through large shopping malls and see people scurrying along like ants sometimes hither and thither apparently random and scattered, intent on the bargain, the anticipation of the freedom and joy it temporally affords them. Like a kid with a new toy until the joy of it or the war and tear of it or the boredom of it gives way to 'hunt' , the hunger, the anticipation of a new sensation. I see the pleasure fade when the 'high' has subsided somewhat and like those who seek to impress, realise they are only maybe are seeking gto impress themselves. 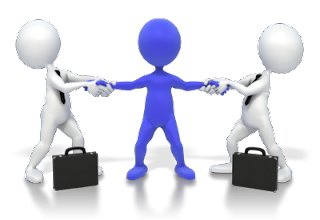 http://www.simafore.com/blog/bid/101917/2-benefits-of-using-Predictive-Analytics-for-Customer-Acquisition (courtesy of the above link)

We seem to live in a take, take, more, more society, thinking that the worlds population which is growing to nearly 9 billion soon, will fed and watered, clothed and sheltered, without putting hardly anything back. An endless bank, tub, womb which never needs replenishing.  The endless pit.
So the answer dreamed up, or thought bank concepts, cull the race, limit child birth. 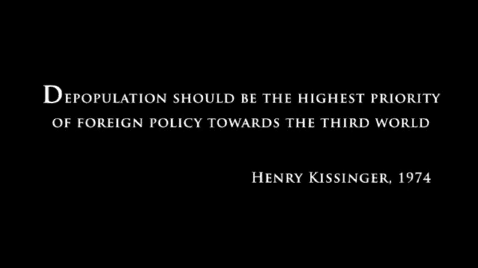 Not just the third world, now, everywhere, so that the wealthy elite will inherit the world.
Maybe there is a kind of back handed plan, that as we become bored with the ever lasting quest for MORE, thinking the more we surround ourselves with the safer we feel, until we realise that the simple things of life such as a warm dry shelter, a few clothes for all weathers, natural organic food and compassion and co operative sharing is a great feeling, and we trust our neighbour, when we truly 'do unto others as we do unto ourselves', that is a mind set that is loving and compassionate.
So I walk the malls at times, watch the soccer match and the identification to some of almost obsession, as if it were their life saviour or only experience of belonging, the pack, the tribe, that's OK if it is just a game, when it becomes a defend or die, my territory, my belongings, mine, my space, me.  Then the attack defence comes in, when it is nationalistic then maiming, plundering, rape, imprisonment, torture which brings out the ugly side of human existence. In the end to relinquish it to death and if one believes in reincarnation to come back and finish unfinished business. 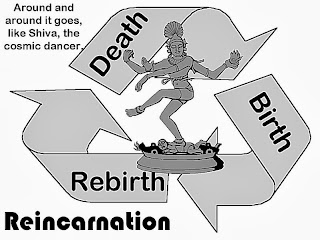 Going around and around and sometimes in ever deceasing circles until we arrive up our behind.
Sometimes we need to wander through Life's highways,   and Byways in order to see the futility of acquisition, things that rot and some that outlast our physical body, to hoard, to ensure through plenty and abundance and selfishly keep it, that all will pass with the passage of time as we know it.
So who are we?  This we find out as we wander through the experience of Life.  As I walk the mall, I do not go to buy or even window shop, as they say in Zen, I just walk. I walk with no mind, not even aware of my own existence, just an awareness that observes and remains calm, and no thing seems more important than anything else.
Amazingly I seem to glide pass and through the scurrying and as the Christmas, Easter [presents and food frenzy commence, this fleeting Life of spending, celebrating a now commercial holiday seems crazier than ever. Of course the more hi tech things become, the more glitzy, colourful, holding hidden promises, then the marketing / advertising personal catch the vivid possibilities of the avid imagination. 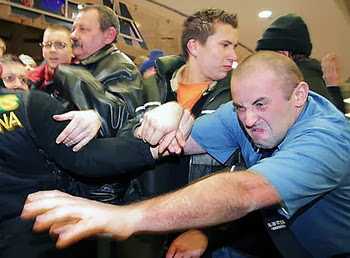 Iv'e actually seen something like this at a sale. People queuing all  night in the freezing cold at times, and the mad rush when the doors open, a human stampede.

Like the magpie the glitz and shiny object arouses the curiosity and the hungry mind seeks out its prey. 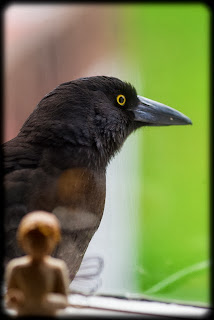 I often have a magpie look into my window at a shiny Buddha I have on the window sill.
Magpies are birds of the corvidae (crow) family, including the black and white Eurasian Magpie, which is one of the few animal species known to be able to recognize itself in a mirror test.[1] In addition to other members of the genus Pica, corvids considered as magpies are in the genera Cissa, Cyanopica and Urocissa.
Some friends have thought me cold and heartless as I stay at home at Easter and Christmas and do not celebrate my birthdays.  I go to others and sit there and enjoy people yet remain unmoved as the sentiment of celebrating things that pass seem meaningless. I would rather celebrate Life every moment so that Life becomes a celebration in itself and not for special or commercial reasons.
So who am I in the midst of all this?  Iv'e no idea but it seems more than OK to be this way.  You see if I could define it, I would limit it to an idea, a religion, a concept and these things sometimes change with time. if one is not addicted or obsessed by a dictum.  But who a define-less awareness entity is is eternal and because it is in a sense formless it cannot be destroyed only a malleable something-ness that is ?
(dictum:-

late 16th century: from Latin, literally 'something said', neuter past participle of dicere).
The mind can sometimes be like an attic, full of useless junk. Some people hoard knowledge they become addictive and obsessed with knowledge, some even get a PH.D with it, and glow in the aftermath of their junk, revered and then give their outdated or 'stuck' knowledge to to others called students. Priests do the same as do some parents. So the free mind is cluttered. 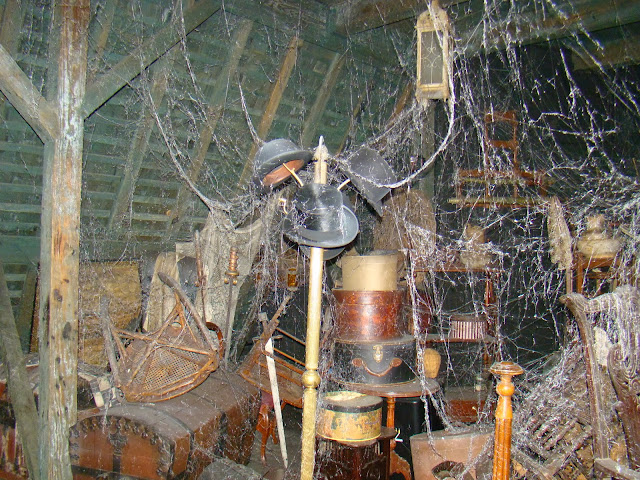 Some search vainly through the attic of the mind to try to fathom out who they are. At best it is a juxtaposition of the objects in there, a clean up of the cobwebs, throw out a few things, afraid to leave the loft empty. Nothing new enters, one feels safe with the junk, 'well at least I know what's there', 'I may need some of these things some day'.So one builds an identity around these objects, thinking they are who one is.  Sadly when one's realisation dawns and a wake up call comes in so many forms, illness, loss of job, house burns down,having to move, financial debt or a so called 'spiritual awakening' the shock of this can lead to a detoxing of the mind often called withdrawal symptoms and often accompanied by body detox.
The temptation is to reload, re hoard, the excuse well these are more 'spiritualal' , simplistic.  Be Empty, Be Well.
Geoff
Posted by GEOFF FREED ONLINE at 02:31