Hi again.  To eat or not to eat that is the question?  I am not sure William Shakespeare would have ventured into this. The famous quote from Hamlet in the soliloquy in the 'nunnery scene'

Whether 'tis Nobler in the mind to suffer
The Slings and Arrows of outrageous Fortune,
Or to take Arms against a Sea of troubles,
And by opposing end them? To die, to sleep—
No more; and by a sleep, to say we end
The Heart-ache, and the thousand Natural shocks ----------- 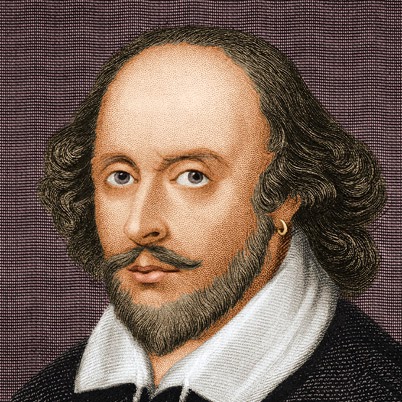 You maybe wondering what Shakespeare and food have in common?  Only I surmise he ate to sustain himself. I digressed as a lead into an article I blogged in the grid way back and has revived itself.

Yogi lives without food and water.
An Indian man has mystified a team of military doctors after he abstained from food and water for two weeks.

Prahlad Jani, an 82-year-old yogi who claimed he hadn’t eaten or drunk anything for 70 years , was observed by 30 medics in a hospital in the Indian state of Gujarat. He spent two weeks under constant surveillance in an area equipped with cameras and closed circuit television. During the 15-day period, which ended Thursday, Jani didn’t eat, drink or go to the toilet.
From AFP:
“We still do not know how he survives,” neurologist Sudhir Shah told reporters after the end of the experiment. “It is still a mystery what kind of phenomenon this is.”
“If Jani does not derive energy from food and water, he must be doing that from energy sources around him, sunlight being one,” said Shah. “As medical practitioners we cannot shut our eyes to possibilities, to a source of energy other than calories.”
The study was done by India’s Defence Research and Development Organisation (DRDO), the state defense and military research institute. They hope to unlock the key to Jani’s mysterious ability so that others can benefit, such as soldiers in the field, astronauts in space, and victims trapped in natural disasters.
Doctors performed several tests on Jani’s heart, lungs and memory capacity and took scans of his organs, brain and blood vessels. Lab work will also be completed on his hormones, enzymes, energy metabolism and genes. The findings will be revealed in greater detail over the next several months.
Jani claimed that he has not had anything to eat or drink since 1940, and called himself a breatharian, sustaining himself on air and meditation. According to AFP, Jani said he was given his special powers after being blessed by a goddess when he was young. After the observation and tests were completed, he returned to his village in northern Gujarat where he will continue his routine of yoga and meditation.
According to LiveScience.com, Jani was placed under observation once before in 2003, but lost weight over the week he was held. ( In another article he claims that he has a hole in his palette and gets his sustenance from there).
Then we come to another type of food subject. Apologies could not get the You Tube frame. 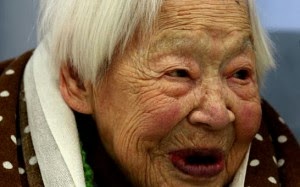 Misao Okawa, a Japanese woman born in 1898, has told The Telegraph her recipe for longevity: eating lots of sushi and sleeping eight hours a night
http://healthfreedoms.org/2014/03/02/worlds-oldest-person-celebrates-her-116th-birthday-eat-and-sleep-and-you-will-live-a-long-time/
So there are some differing  views on food or not food.  Then there are all the diets, juicing, food combinations, macro diet, bio diets, mono diet. Where do we select the correct one for us.  Maybe we can eat what is locally, organic and in season.  I have tried many of the above and more and still feel I have to come across the 'right one for me'. I feel to become a prana / chi feeder and am gradually working towards it.  We shall see.  I have this feeling that ultimately we are energy beings and so our source of food is 'energy'.  I guess the process of transformation and its 'quantum' leaps will eventually reveal it. 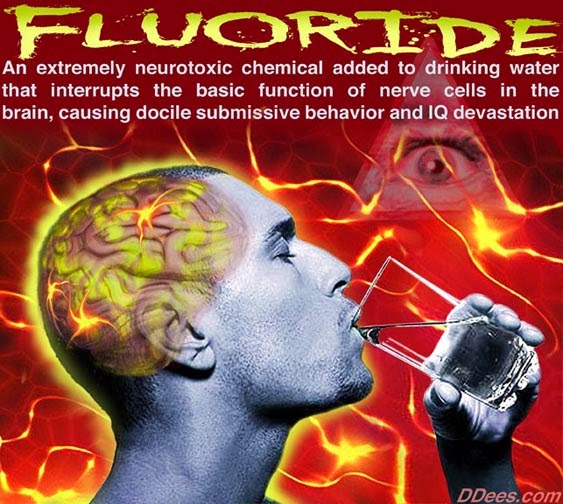 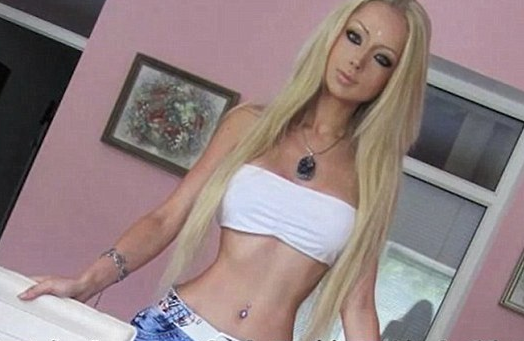 http://www.dailymail.co.uk/femail/article-2570013/Human-Barbie-Valeria-Lukyanova-reveals-STARVES-Breatharian-believes-live-air-containing-
Article and photos are incredible. 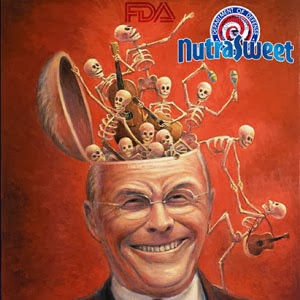 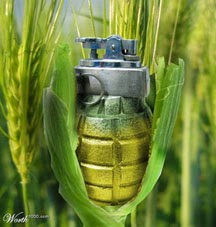 This article contains six videos that are in my view absolutely paramount for ones health. 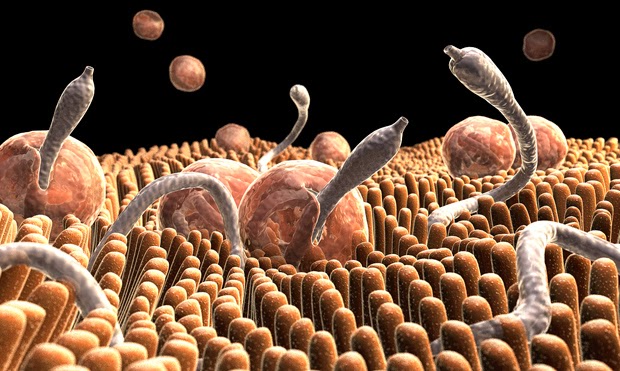 Gut Parasite. (Not only in government ministers) Image courtesy of australiageographic.com.au

http://www.disclose.tv/action/viewvideo/167480/250_Million_Americans_Infected__The_American_Parasite/
So what do you eat?  So much advice and diets!!!.

When eating protein isn’t as dangerous as smoking

Is eating meat really as bad for you as smoking?  According to the headlines, it is—but they miss out one vital fact.  Protein becomes more and more important as you get older.
Eating protein, and especially meat and cheese, makes you four times more likely to develop cancer, a risk profile that is similar to smoking, a new study has claimed.
And the media was quick to jump on the findings with headlines that proclaimed that consuming animal protein every day is the same as smoking 20 cigarettes.
It sounds wrong, and it is wrong.  It’s all to do with how much protein you eat and your age, as the researchers from the University of Southern California were at pains to point out.
The risk exists only for people in their middle-age, but it flips over by the time you hit 65.  Then, a high-protein diet is good for you, and helps protect you against a range of diseases.
It’s all to do with the IGF-I protein, which helps our body grow, but can increase the risk of cancer.  Our normal levels start to drop off by the time we reach 65, resulting in a loss of muscle mass.
And not all proteins are equal.  Plant-based proteins, such as from beans, don’t carry any health risk, whatever age you are when you eat them.
The study is also aimed at Americans, who eat more proteins than most everyone else.  The researchers recommend that a middle-aged person should consume around 0.8 grams of animal protein per kilogram of body weight every day.  That equates to around 50 grams of protein for a person weighing 130 pounds.
You should also be deriving just 20 per cent of your daily calories from protein, say the researchers who looked at the lifestyles and health of 6,318 adults over the age of 50.
(Source: cell Metabolism, 2014; 19 (3): 407-17 (Courtesy WDDTY) 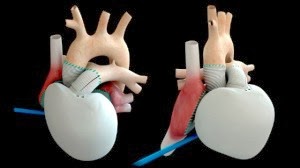 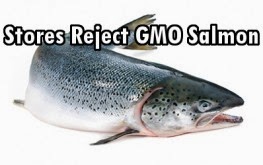 Here we go again.  The threshold of choice. Do we go as Posts 135 /6, or go to GMO foods as a step towards those Posts above?  Do we go back to ah la naturale completely or a mixture of hi tech safe to the environment and us?  Do we want chemtrails ruling our weather or take a chance with natures cycles, even if some of those have proved unpleasant to say the least?   Do we want a few gung ho elite brutish gang leaders having control of the mass population? Do we want as these two presenters on RT or at least one of them speaking out.

There are some points I would comment on. RT has not sacked these presenters, and RT claims although it is funded by Russia the presenters are free to air their views independently, that is why I watch it and others like at times. I do not agree with Liz Wahl in some ways.  My grandparents came from Russia and the Ukraine, first to Germany and then to the UK during the 1st and 2nd World Wars. And they were grateful and were happy and did well.
What Liz Wahl does not say nor Abby Martinis that the USA with the UK and France with others went into Iraq, Afghanistan, Libya, Somalia, Egypt, Syria and other places on a dodgy bit of UN LEGISLATION, and have left these countries devastated and worse off. Thousands are still being slaughtered and maimed.  The infrastructure torn to shreds, many people without medical aid, clean water and food.

I agree totally with Abby Martin when she says 'about global power chess games' and (the people as pawns, my quote).
I can see Russia feeling threatened, in the cold war a Russian friend of mine said the former USSR felt like a bear being caged in. Now the USA and EU have got missile sites in Poland and other places, NATO breathing hard down the necks of all the countries not in the EU. So if the Ukraine goes EU they face a bail out like Greece, Italy and so on, there is a price to pay, plus the Western Allies are then on Russia's door, a step from going into Iran and a threat to China.  I say to the peoples of Ukraine'just weigh up the pros and cons before you choose. In the USA and EU many people live on the streets, homeless, jobless and sad and sorry.  You can see them in Greece, Italy, Germany, France, Spain living on the streets.  There is a massive drug problem, polluted food, young people in prostitution. Be careful, you have a beautiful country and wealth and material possessions are not abundant in the EU only a few have this. The bakers, the celebrities, those in well off jobs. It is true if you get a job you will be better off financially possibly, however many here in the UK send money back to their home country and when they realise the pitfalls, they go home.  Some settle here and are great and help the UK in many ways.  All that glitters is not gold. 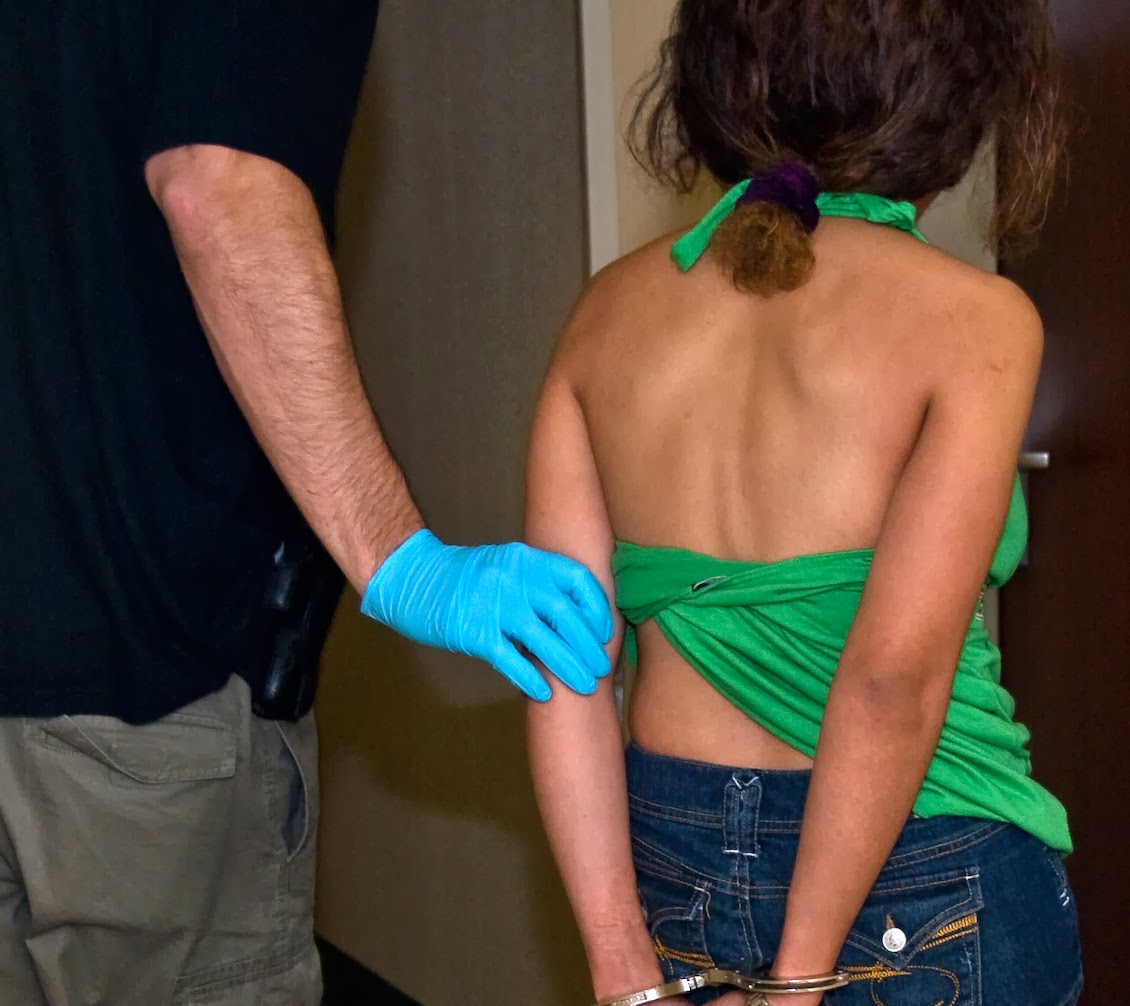 All to sad a site of a young girl caught in a drug ring and led away, we see this every day in the news.Courtesy.wikileaks 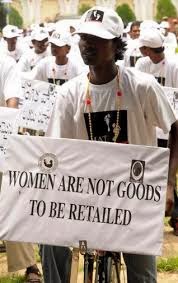 Courtesy www.thehindu.com.  All over the world this horrid human trafficking, this lust for vice and sex, a fast growing addiction. Many say I will never get caught up this, young men as well end up as 'rent'boys.  I saw all of this in the 70's and 80'sand 90's when in Forensics.  It has grown immensely and grotesquely.   Young women in the USA SELLING THEIR BREAST milk to survive, 'the greatest and so  called civilised country in the world' here in the UK so many 'food kitchens' and falsified statistics. I say to all EU and all countries wanting to join the EU.  Stay where you are, grow your own decent organic food, teach your children to love the Earth, to have respect and live a simple life, because if we do not we shall run out of minerals, food, water and then then we shall all be slaves to those that rule.  The American Dream in tatters, just a dream not come true.
Already that stupid half wit William Hague, bleating in his sanctimonious monotone saying as a repeat of USA Kerry Berry hairy hiker, Syria is still capable of making chemical weapons, they are itching to go into Syria and Iran.  Wake up liz and Abby, you've told half the truth, are you scared that by telling the world about USA incursions, you will be homeless like Ed Snowden?  Be fair Putin has to do this in a way because it is known USA CIA and EU politicians have been stirring up the general public as they do all over the world and then cause public unrest. This lends itself to militants coming in and the Western Powers then supply arms secretly to the rebels who they condemn as terrorists in the first place.  Russia does this as well.

When baking, follow directions.  When cooking, go by your own taste.  ~Laiko Bahrs

Anybody who believes that the way to a man's heart is through his stomach flunked geography.  ~Robert Byrne

It would be nice if the Food and Drug Administration stopped issuing warnings about toxic substances and just gave me the names of one or two things still safe to eat.  ~Robert Fuoss

Shipping is a terrible thing to do to vegetables.  They probably get jet-lagged, just like people.  ~Elizabeth Berry
Bon Apertit. Be Well. Geoff
Posted by GEOFF FREED ONLINE at 03:25