Hello again dear readers.  I may not know you personally, however I feel a deepening of the oneness with humanity and so to you, through the collective unconscious, which now seems to be becoming more 'conscious'. 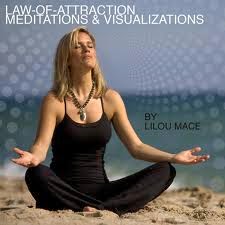 I have included the Lilou and Barnet Bain's above as part of a sort of introduction to what I have to share later on.  I also see that Eckhart Tolle is in on this and like him I love certain movies as well.
Lilou was , so far, the only 'celebrity' who actually personally replied to an email I sent her some time back acknowledging her tremendous work. Many others sent a impersonal kind of pre-made reply.  I realise they are busy, but when I was on the trail as it were, I always emailed or telephoned back.  I made time.  It sometimes ran me into financial difficulties with the long telephone calls and sometimes letter posting.  People were good enough to attend my workshops, seminars and lectures, and so I felt connected to this stream of consciousness and as family.  The world family. 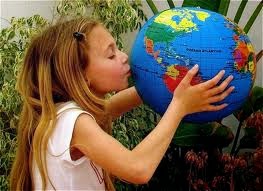 Courtesy soultravellers3.com
So what has all this to do with the above?  In January 2013 the last blog I did was in www.energygrid.com under the menu Destiny.  I did know when I was going to blog post again.  I started again in this site on the 25 February 2014.  I felt I had finished what I had to say, yet there was more to arrive. I felt a renewal and yet that expression was not to be in the mode / style / expression I felt. There was something brewing in the depths and it was coming through, however much the same old, same old, ALTHOUGH I felt a different energy in it.  It was if the electricity supply was fresh and vigorous and YET the wiring was old and running on habitual routes and circuits, something was building up, I FELT  a deep new inner awakening. 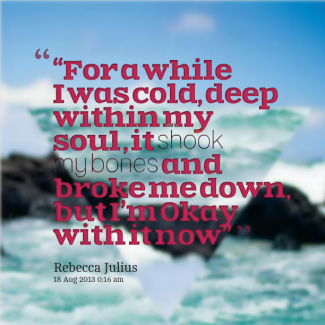 Courtesy Inspirably.com
It was though at times I was cold inside, I felt a deep energy, sometimes it seemed an omen a sign of a forthcoming doom, and with the world situation and everything going down the tubes as it were, many of my friends and whistle blowers felt at times this was apocalyptic. 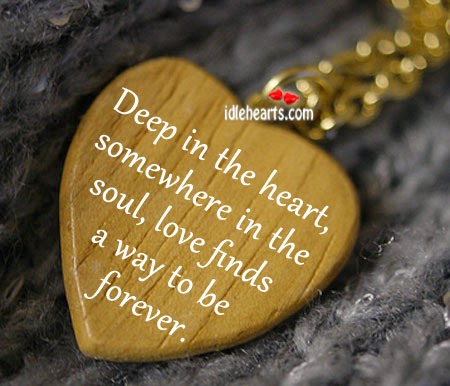 Courtesy www.idlehearts.com
I had written, way, way back about two very significant 'heart opening' experiences and how they felt very, very physical and accompanied by the 'spiritual aspect' in which I knew it was not a heart attack(If you experience chest pains and so forth please check with your GP or A+E, emergency rooms, everyone's experience and knowledge is different, I merely offer these in the Post, they are not everyone's,  these are specific to me, next time should this happen I might go for treatment or check up) .  I offer some videos below to substantiate my point.


HeartMath
More Heart
More Heart. ( A five part)
To go on, some synchronism came along with a few incidences and then in meditation, some special 'letting go Qi Gong', some Taoist and a book sent to me about then true meaning of Shamans and their experiences, then compounded by the Lilou / Barnet / Eckhart video interview and some astronauts, especially Commander Chris Hadfield's remark as other astronauts I know and communicate with have shared.  Chris is a real comic see just one of his videos below, he has many comical takes on You Tube.


Commander Chris Hadfield on the ISS.
Just as a side issue.  I mentioned many times in energygrid that my 'main stream scientific research' is not to  be confused with my blog / post 'outside the box / metaphysical take' and my objective is to 'marry' or at least find parallel links between the two.  I 'work' voluntarily, with 499 other retired scientists, astronauts, doctors, lawyers, politicians and anyone of a like mind but more importantly 'kindred spirits'.  So yes my main stream work is completely separate from the Posts.  I am retired as it were from earning a living, my work is voluntary even for the main stream. People I meet ask me this many times. 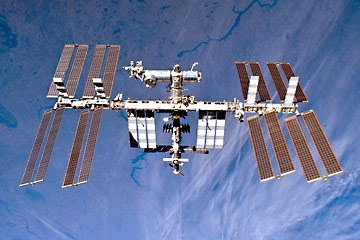 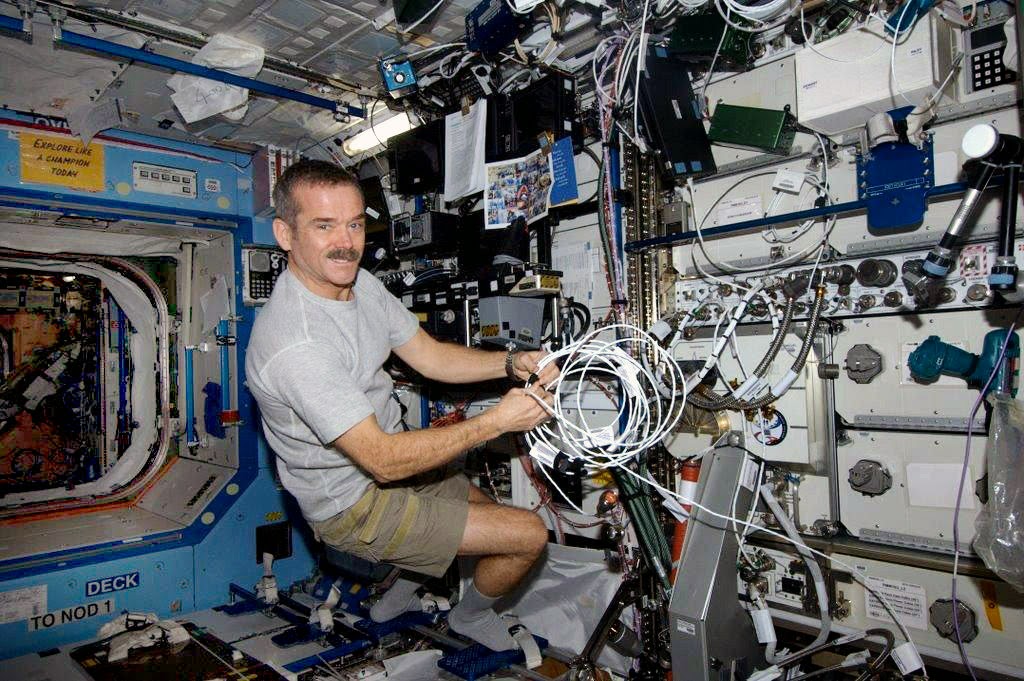 Inside the ISS Courtesy NASA and ESA
Just recently on British TV there has been a series on
http://www.mirror.co.uk/tv/tv-news/channel-4-live-space-season-3004479

http://www.esa.int/Our_Activities/Human_Spaceflight/Astronauts/Daily_life
Anyway many of the Astronauts keep their 'spiritual opinions' and other things to themselves for their own private reasons, however, in the above programmes in which just ordinary 'facts' were shared, many mentioned the beauty of the Earth, our oneness, a world without borders, and we should try to preserve and protect it and ourselves.  I felt a warmth and genuine concern and Chris Hadfield was short but specific, he really would try and do things to bring this unity about. 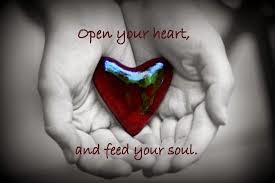 Courtesy queenpinmama.blogspot
My heart physically was beginning to feel pressurised, not just a physical pain, but a bursting with emotional pain. I was throwing off the 'past' as it were and as I did I literally felt my chest expand a deep yawning, a new breath and a bursting forth of tears of joy, release.  I felt a freedom. Barnett Bain's above describes some of it in words as Lilou and the feelings I got from HeartMath and the ISS astronauts. Something was awakening in the collective, the shift was being gradually grounded from WORDS, CONSPIRACY EXPOSURE  to SOMETHING ELSE.  What was this something else?
IT IS LOVE.  Not emotional and yet it could be, it was a deep compassion, a warm heart felt greeting.  I FELT this as I experienced in a deep connective way my GROUND BEING, that SPACE, the Emptiness the planets and stars float in, the INVISIBLE Womb where the Universe came from which ever way one perceives it, we all and everything COMES FROM THIS and Goes Back to it. 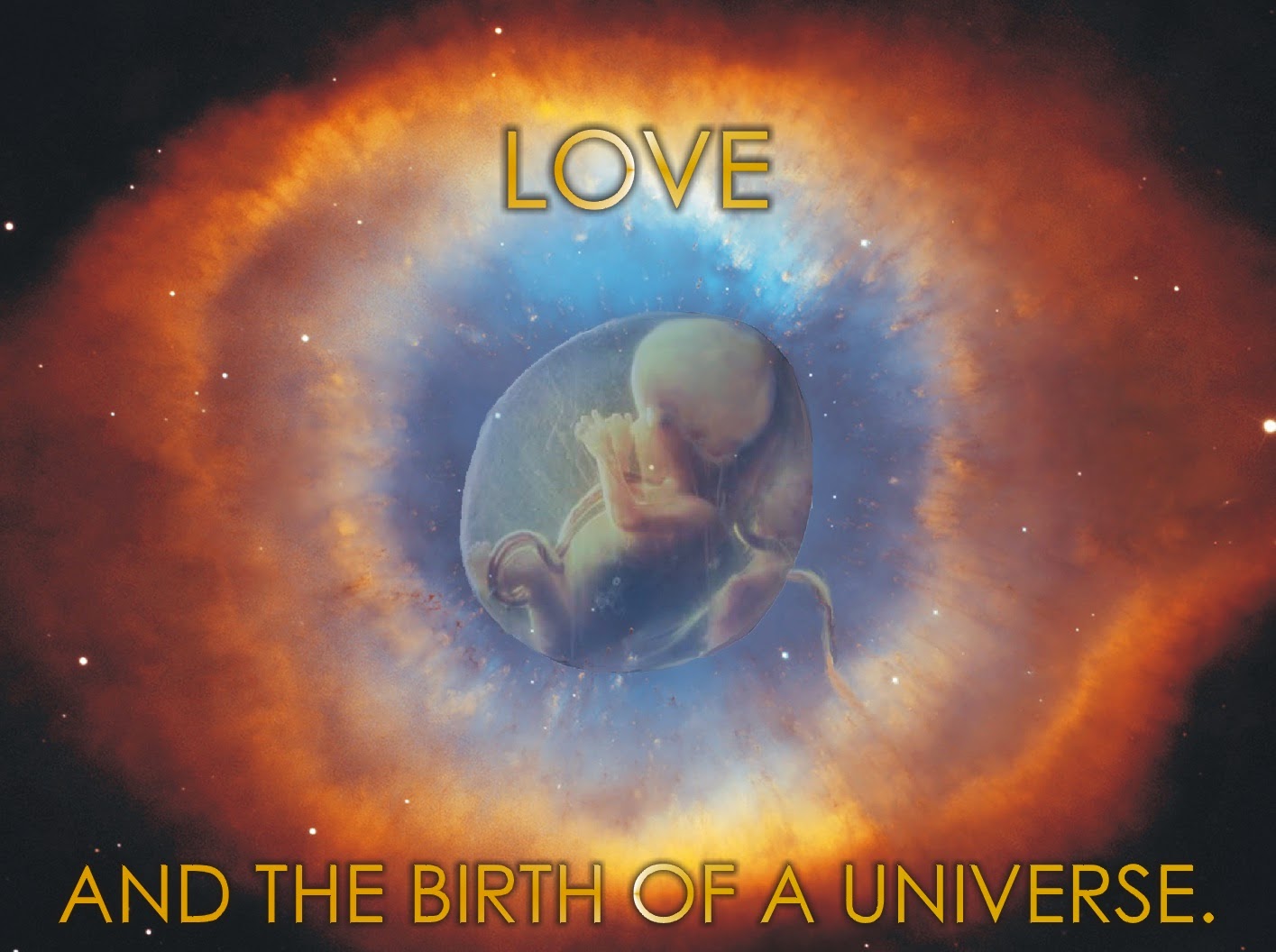 Courtesy People.Tribe. Net
I have felt this connection before, never this deep, I felt joined at one, We all, the Cosmos, you and I, stars, planets, the whole darn shebang came from the same source, we are merely different aspects of the one. This is known from time distant and said by many.  It is not UNTIL the last programming, the shackles that bind the heart, the vacation from head to heart occurs that the real EXPERIENCE beyond the word or intellectual appreciation and understanding fades that the floodgates open and love in its pure sense pours out. The sluice gates, the dam walls break and then this flows into the sub stream to become soon main stream  which begins and the percolation filtering process enters the hard shell of ego and gradually wears it away until there is a thinning of the shell, the thick skin, the carapace and it lets in the waters of purification and one arrives home. 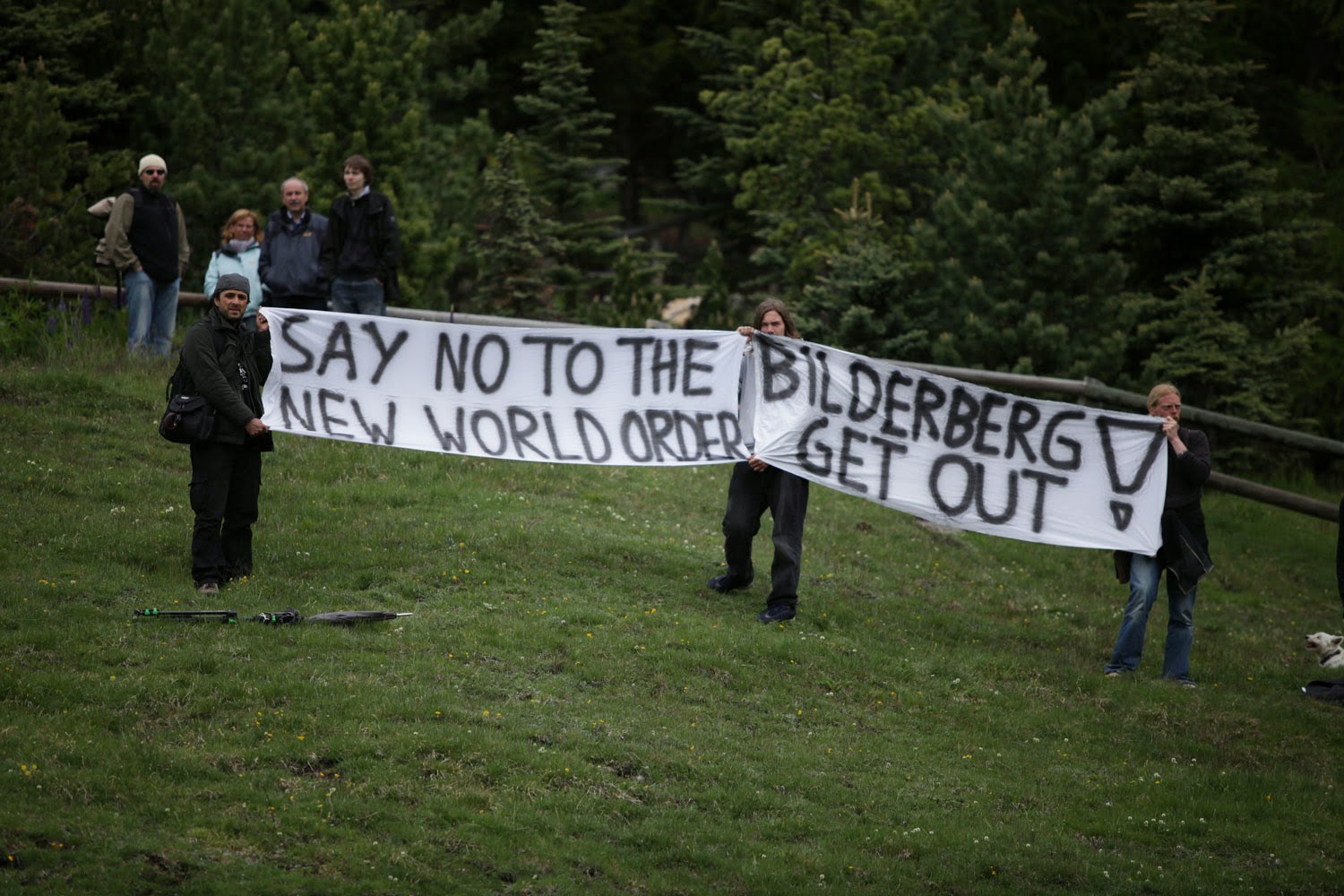 Courtesy thekeytoeternity.blogspot
Suddenly I felt no animosity to the bugs above, the elite, the bankers, the medical, chemtrail, petroleum, fluoridating, fracking, fiddling connivers. I felt it differently. Intellectually, logically and a deep understanding I reported these issues since 2005 until now, and knew about these issues since 1958.
I felt the obvious that I stated and said to patients, these are programmes not really who they are, we are lights not the lampshades and so on. I felt this, but an anger, a mind numbing, an incredulity came upon me. 'How could such educated people become so stupid, with children, grandchildren to kill their supply from the Earth with pollution and you know what.  Are they so addicted, blinded by ego greed?  No surely they have a plan, maybe they will go to the moon, Mars as Ben Reich suggests, live in underground cities, or just kill us all off and have the world for themselves and rejuvenate  it when we are gone' 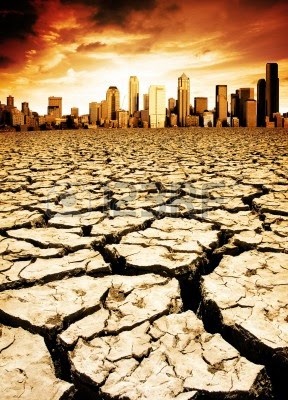 Courtesy www.123rf.com
A bleak future, a programme in a computer as Posts 135/6,  a burnt out exhausted world as some or many people are feeling now. So many adverts for vitamins, minerals, diets, exercises all to buck up the spirits as it were.
Then as the heart opened, as the floodgates burst open, the prison bars of mind cracked open, the heart / love / pure life force without word, pictures or meaning flooded through my being, my cells, my body, I felt clean, reborn, 'Behold I make all things anew'.  I felt rejuvenated, regenerated, reborn, relaxed and it didn't mean I would continue to live in this body, be super fit, never be ill, it just simply didn't matter.
I felt all of the reporting in the blog / Posts are redundant, I felt that a NEW CHAPTER IS BEING BORN for me and the world.  I cannot report on the political issues, the corruption and the rape. I am not foolish I know it goes on and it seems foreign, alien and inappropriate to me now, as it did then, but in a fundamental shift.  It does not mean I turn my back, a blind eye on it.  It is not for me to express myself in this way for now and maybe not again. There are so many who do this, Rense, David Icke, David Wilcock, Disclosure, HealthFeedoms, ForbiddenKnowledge, Well Org, Matt Monarch and I could fill the page. 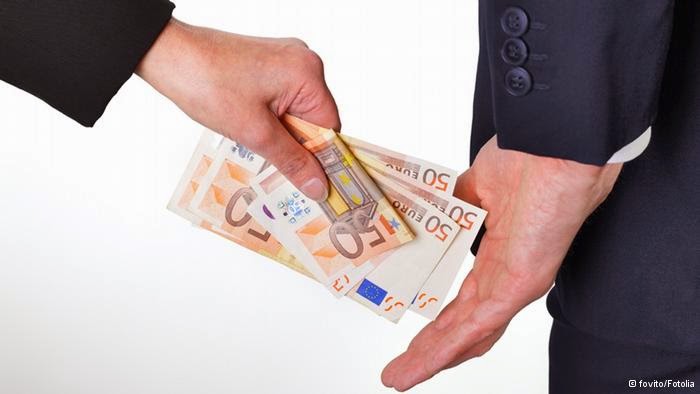 Courtesy mataandreasen.com
This shift is difficult to put into words because it is away from the head to the heart, and as you will witness in the HeartMath videos, the heart is connected to a whole lot else than logic and intellect.The anxious feeling of some dreaded apocalyptic event I sense now was the head sensing, the ego sensing, the abdication to the heart. This could well be the way the world ego senses its demise and is fighting back to regain its 'head start'.
Yet there can be a marriage. The love of the heart married the logic of the head as I have mentioned physically about the corpus collesum in many Posts and Blogs(blogs are in energygrid, Posts in this site).  Logic is needed in worldly matters to some extent. 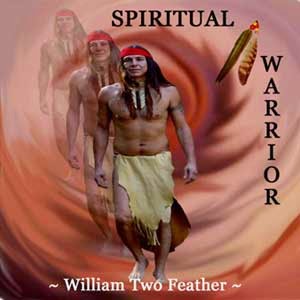 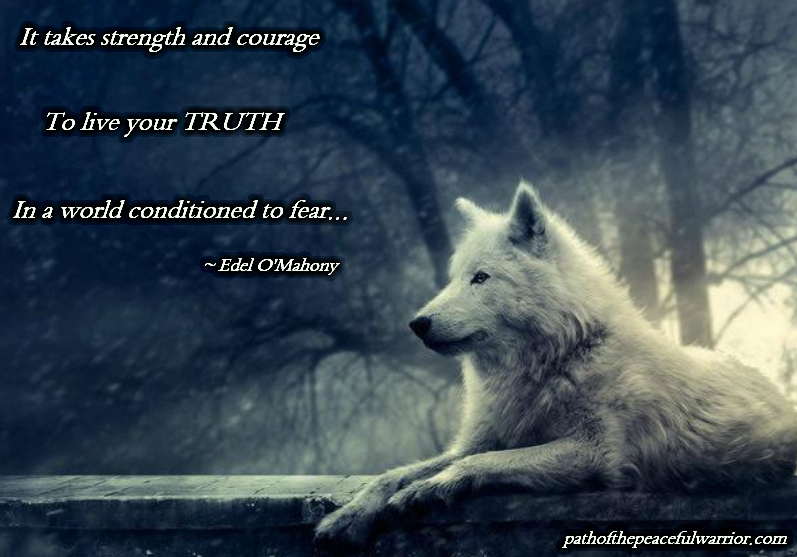 Courtesy edelmahony.com
I also stated a lot about being a spiritual warrior, although I have to be alert, present, mindful as the above suggests, I feel an easiness arriving, a joyous relaxed river of relaxed inner beingness. A river of love (not slushy and sentimental but passionate and clear, a dynamic rather than a specific).  Not an effected effort to be on the alert, that wicked pain body ego ready to jump and ensnare me. Yes that may occur, yet somehow, the saboteur may lurk, yet it is not finding the 'solid me' the impacted conditioned ego me, compacted into solidity that was easy pickings because the target was bold, in your face and evident.
The fading ego, the net of conditioning has holes in it, the bricks are falling out of the dam, the veil has rents and tears in it. It is harder to find anything solid to attack, it is hard to attack emptiness and space. There is ghost, a phantom of the 'old self' yet it seen through because of its transparency, there is not the urgency to claw back the old, even the ego is beginning to release its grasp as it realises that its fundamental 'goals' and ideals are for easy living as well.  So it is beginning to piggyback / picky back onto the nowhere-ness and as it sees being a nothing is OK, its energy fades as it realises its fragile existence as a programme, a set of habitual responses and reactions which have no substantial reality at all.
So I will rest, as this comes easy now, and see how it unfolds. so until next time or not. 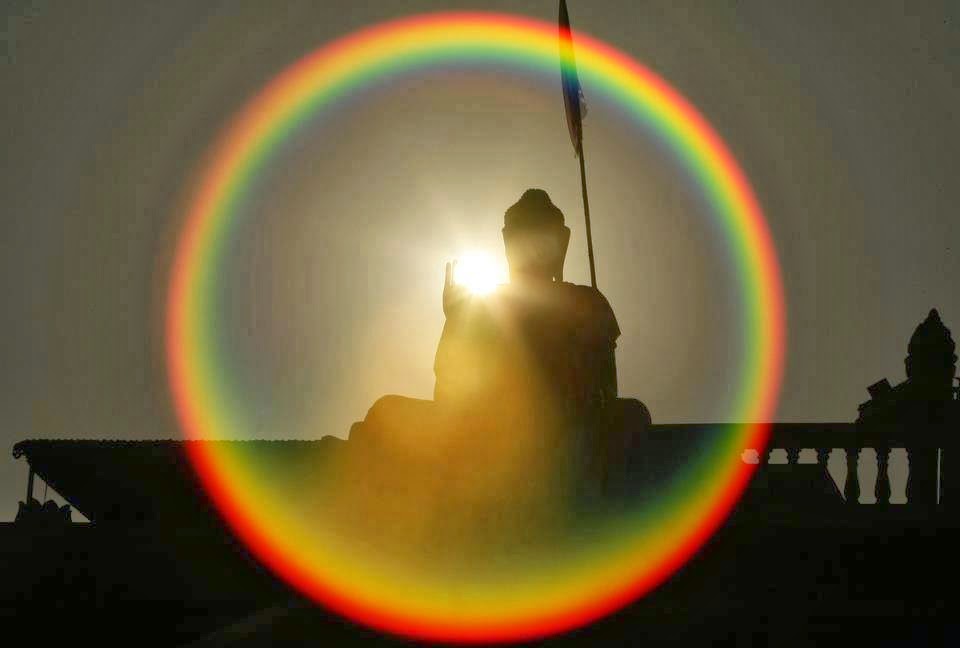 Posted by GEOFF FREED ONLINE at 23:31