URGENT IT MAY TRY TO SPREAD WORLDWIDE BECAUSE IT INVOLVES LARGE CORPORATIONS. Thanks dear readers. 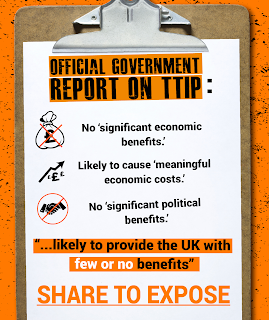 Fresh off the press today is the government’s business report on the EU-US trade deal, TTIP, and its potential impacts on the UK. It finds that TTIP will have little economic and political benefit, even going as far as to say that it will pose ‘meaningful costs’ to the UK. These damning conclusions come with no surprise, and reveal that TTIP is ‘likely to provide the UK with few or no benefits’.
Here are the key findings;
(1) There is little reason to think that an EU-US investment chapter will provide the UK with significant economic benefits. No two countries in the world exchange more investment than the UK and the US, and there is no evidence that US or UK investors view either country as suffering from the kinds of political risks against which investment treaties are supposed to protect. Moreover, existing evidence suggests that the presence of an EU-US investment chapter is highly unlikely to encourage investment above and beyond what would otherwise take place. US investors have generally not taken much notice of investment treaties in the past when deciding where, and how much, to invest abroad – even when dealing with far more questionable jurisdictions than the UK.
(2) There is little reason to think that an EU-US investment chapter will provide the UK with significant political benefits. The political relationship between Washington and Whitehall is exceptionally strong, and we are aware of no evidence that it is vulnerable to a meaningful risk of investor-state disputes that would become undesirably “politicized” in the absence of an investment treaty. Secondly, we find it unlikely that an EU-US agreement would make significant negotiating partners – like India and China – more or less willing to agree to an investment treaty with the EU. Finally, it is unclear whether the US is particularly keen on an investment protection chapter with the EU, which means the Commission may not be able to use such a chapter as an effective ‘bargaining chip’ in other trade and/or investment negotiations with Washington. However, these are all issues that BIS might wish to explore in further detail.
(3) There is some reason to expect an EU-US investment chapter will impose meaningful economic costs on the UK. Based on Canada’s experience under NAFTA, we would expect an EU-US investment chapter to be regularly invoked by US investors against the UK for governmental actions that would normally not be challengeable under UK law. While we would not expect the UK to lose many of these cases on the merits, the UK will necessarily incur costs to defend itself. Legal costs in investment treaty claims are substantial. The UK government may also find itself subject to pressure to settle some claims, even when there are reasonable prospects of successfully defending the claim on the merits. Finally, given the uncertain meaning of key elements of international investment law, it is possible that the UK would occasionally lose some arbitrations on the merits and be liable for significant damage awards.
(4) There is some reason to expect an EU-US investment chapter to impose meaningful political costs on the UK. Under investment treaties similar to a likely EU-US investment chapter, US investors have brought claims that raise potentially controversial questions. Should US investors bring similar claims against the UK, this will increase the chances that a particular dispute could provoke a backlash against the EU-US economic agreement as a whole or, perhaps more broadly, investor-state arbitration as a governing institution.
Follow this link to read the full report:
https://www.gov.uk/government/uploads/system/uploads/attachment_data/file/260380/bis-13-1284-costs-and-benefits-of-an-eu-usa-investment-protection-treaty.pdf

THANK YOU FOR SPREADING THE WORD

BEST WISHES AND BE WELL.  GEOFF