Dear Reader Apart from the madness of the false science behind Covid- 19(there are exosomes causing a severe respiratory infection in some folk who have an underlying often undiagnosed health problem) and now a madness which goes beyond belief and is being set up.

Ray Kurzweil (I spelt it Kurzwell then) for example POST 136 A Special No.2 Friday 14th February 2014, Ray was positing to download ones brain onto/into a hardrive and recently to a cloud, he went further to say that all our brains in the world could live in a hardrive and it would be kind and we never would know we were  alive on a hardrive and have a trouble free life for ever. Elon Musk has a similar set of ideas. As fantastic as this seems you have to watch and read the following
I find this hard to follow because Whitney Webb who is absolutely brilliant speaks fast and I am 82 and find it hard to follow but have read the data and I could  not sleep and was nauseous for some time.
https://articles.mercola.com/sites/articles/archive/2020/11/01/operation-warp-speed.aspx?cid_source=dnl&cid_medium=email&cid_content=art1HL&cid=20201101Z2&mid=DM699776&rid=1000653508   However the same video without the interviewer is much better in Dr Mercola's download. If you thought my Smart City POST was an exaggeration
then listen to Whitney it is jaw dropping. I POSTED two versions of the same in case they get deplatformed, I knew about this and heard whispers but I could not believe they were really contemplating this and THEY ARE DOING IT NOW----THEY ARE SETTING UP THE INFRASTRUCTURE NOW---IT STARTS WITH THE VACCINE AND MAKES BILE OOPS SORRY BILL GATES LOOK ALMOST HUMAN.
POST Monday 21st September 2020 'WELCOME TO SMART CITY'
Many of you would have seen these diagrams over and over again I apologise but they are as pertinent as ever as the delivery will be more and more digital and linked into the Smart City.

The title is enough for me; Oneness versus the 1%
https://articles.mercola.com/sites/articles/archive/2020/11/01/vandana-shiva-oneness-versus-the-1.aspx?cid_source=dnl&cid_medium=email&cid_content=art2HL&cid=20201101Z2&mid=DM699776&rid=1000595023
In the councils of government, we must guard against the acquisition of unwarranted influence, whether sought or unsought, by the military-industrial complex. The potential foThe military–industrial complex (MIC) is an informal alliance between a nation's military and the defense industry that supplies it, seen together as a vested interest which influences public policy.
Eisenhower as President, 1953-61, Eisenhower Library; National Archives and Records Administration. On , in this farewell address, President Dwight Eisenhower warned against the establishment of a "military-industrial complex."r the disastrous rise of misplaced power exists and will persist.
Dear Dwight Eisenhower was allegedly met an an airfield by a UFO and the visitors told him of the above.
https://www.deccanherald.com/content/227382/former-us-president-eisenhower-met.html
Now I hear the baying hounds as they say ' Oh you are a nut' and you cannot prove it. Timothy Good is a friend of mine and I have known Timothy for many years. Please read his books and see the fact backed names and written proofs.
However the main point is that The Dark Journalist Daniel Litz and Whitney Webber  and others  Continuity of government (COG) is the principle of establishing defined procedures that allow a government to continue its essential operations in case of a catastrophic event such as nuclear war.

COG was developed by the British government before and during World War II to counter threats, such as that of the Luftwaffe bombing during the Battle of Britain. The need for continuity of government plans gained new urgency with nuclear proliferation.

During and after the Cold War countries developed such plans to avoid (or minimize) confusion and disorder due to a power vacuum in the aftermath of a nuclear attack.

In the US at least, COG is no longer limited to nuclear emergencies; the Continuity of Operations Plan was activated following the September 11 attacks.arn about the Industrial Military Complex.
The concern is that should the USA and UK and other countries have open rebellion then COG would come into play and of course this furthers the hand of Industrial Military Complex and of course the use of technology and the 5G Smart Cities would be just the thing to aid this process; surveillance with very little use of soldiers and police. COG has a supreme Commander who takes over from the President or Prime Minister and it is Military rule. The Dark Journalist is concerned over the appointment a new commander do look him up and see the video.
This just shows the duplicity and skulduggery and awful deceit and deception supposedly ethical bona fide scientists will go too and probably politically or financially prompted.

·                        According to Alina Chan, a molecular biologist at the Broad Institute of Harvard and MIT, SARS-CoV-2 did not evolve in a manner you’d expect, had it jumped from an animal to a human. It sprang into action fully evolved for human transmission

·                        It appears Nature, a top medical journal, has allowed authors to secretly alter data sets in their papers without publishing notices of correction

·                        Chan’s investigation reveals authors have renamed samples, failed to attribute them properly, and produced a genomic profile that doesn’t match the samples in their paper. Others are missing data

·                        If SARS-CoV-2, the virus responsible for COVID-19 and the subsequent response to it, came from a lab, then we need to reassess the future of gain-of-function research that allows for the weaponization of viruses

It's very frustrating that critical information on SARS2 origins is coming out almost on a need-to-know basis. And we have no idea what's going on behind the scenes among the journals, authors, peer reviewers. ~ Alina Chan 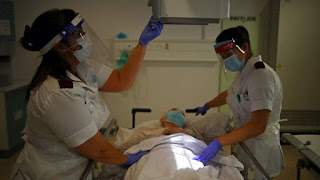 I have been suspicious of the 'computer modelling' of Professor Ferguson of Imperial College which has strong ties to Gates and is heavily funded by Gates. Furthermore one rule for 'the in crowd' and  another for us plebs; Ferguson during first lock down had two prostitutes visit him, no prosecution or severe warning. I have also been suspicious at the SAGE the body that advises the government and the chief medical officers they have ignored literally thousands of top scientists and doctors who have sent petitions to the governments of the world and been ignored. This to me suggests there is a hidden agenda and with the censoring and deplatforming and nothing but the official narrative and not even a discussion or a second opinion. The USA election and President is crucial. I will only comment when the President is installed. https://www.rt.com/uk/505230-britain-johnson-justifies-lockdown/
A great Reset  by Sayer Ji
This article explains the White Helmets who were funded and set up with fake videos and fooled the world at one time in their purported heroic rescues and daring acts in Syria and they were found out to be  fake and funded by the West to stir up animosity and try to get Assad blamed for chemical attacks and then also exposing the OPCW being crooked. I must have POSTED at least twenty pages on this. Yet a another is assassinated in order to cover up the truth although he was as bent as  a brass bent buckle.
https://www.rt.com/op-ed/505028-white-helmets-james-lemesurier/?utm_source=Newsletter&utm_medium=Email&utm_campaign=Email
Trees, oh beautiful trees and forests apart from their natural beauty and healthy walks and physical and mental restoration plus their absorption of carbon monoxide and other benefits to wild life and so much more. The scientist cannot leave nature alone. Monsanto and GM and now GM trees and of course really GM vaccinations. It seems anything natural is abhorrent to some scientists and like the Pharmaceutical lot they sneer at herbs and natural health and so much so now openly deny it on the net by deplatforming it . A great Medicine man I knew said 'If we go too far Mother nature will not like it and one cough and we are off' Many years ago I met Sun Bear and he was ostracised for speaking out and annoyed a lot of people.

·                        A release of GE trees would open the door to release other genetically engineered plants in the forest. It is impossible to monitor the GE trees or predict how they will impact the environment

New figures from the Office for National Statistics (ONS) show there is “no longer a difference” in the rate of infections between those who have travelled abroad and those who have not.

A major long-term study to track Covid-19 in the population had previously found that there were higher positivity rates among people who had travelled aboard compared with those who had not.

https://www.rt.com/news/504826-australia-war-crimes-afghanistan/?utm_source=Newsletter&utm_medium=Email&utm_campaign=Email
No isms for me

Posted by GEOFF FREED ONLINE at 06:15