Hello and welcome to Notions. Trusting dear readers you are well and bonny. I felt to get away from the Earthly mires we have and get out and about a bit.  Some of this you may find 'tongue in cheek' and it may provide you dear folks with food for thought and pondering. There is so much in the news these days regarding ET and many science fiction films.  Are we being prepared for an eventual official announcement as to the ET presence or or will we be subjected to a explicit fly past that cannot be ignored.
If ET exist and they are sort of friendly and giving them the credit for endeavouring to turn us to better ways and then frustrated decided ah well the hell with it, lets show em  who we are and blow the governments.
http://www.energygrid.com/destiny/geoff-freed/2005/05.html
In the above link I set out a very brief synopsis of my research. The overseers have remit which forbids them from direct interference and only should this planet be threatened with a break up through weaponry, then they will act and stop it. As I was led to believe, many would perish, the human race disbanded, as we are hybrids and the Earth refurbished. This I stated long before the films from Hollywood stated the near same. 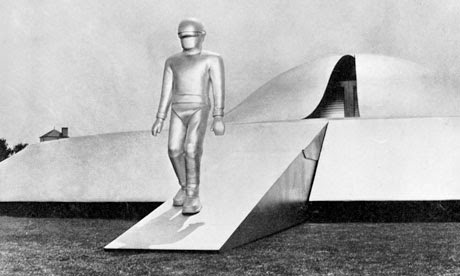 Gort. The Robot from the original film 'The Day the Earth Stood Still. With Actor Michael Rennie. Courtesy www.theguardian.com 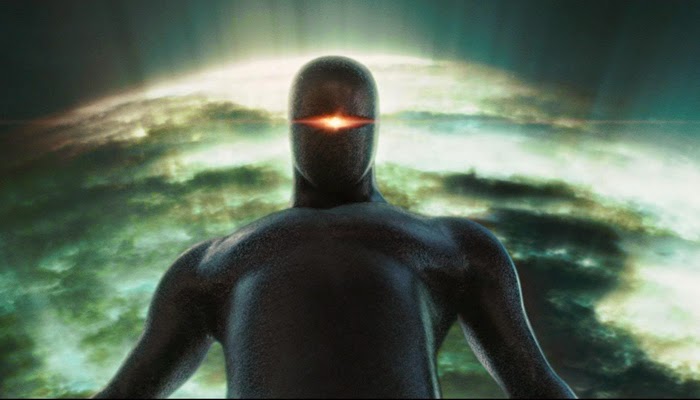 Gort.  The Robot in the later version of the above with actor Keanu Reeves. Courtesy www.artymind.com
In my link it is stated that the 'golden rule' of the Universe is non interference with another planets culture and evolution, except where it could lead to a 'solar system or system break up' as above in link, or if an advanced race had seeded a planet and were watching its development and with co operation with the authorities agreed to upgrade or whatever. ( My dear late brother was for a short while a manager at various cinemas, when they showed the original 'The Day The Earth Stood Still' they had at one of the cinemas in a place in London named Willesden, the working model of the first Gort.  Many queued up to step inside in a kind of step thing and work the controls. The man in the film was tall and strong, they modified it for us kids, it was great fun).
So we shall wait and see. May I kindly remind you of the interview with a ET after the Roswell Crash.
http://alieninterview.org/blog/2010/07/roswell-anniversary/
Incidentally I have the full interview with Nurse Matilda O'Donnell MacElroy and the ET.  I have stated that my authentic whistle blower has assured me this is genuine.  I have other sources as well. I have blogged a lot in the 'grid' about this.
In her interview a couple of points came about which verified my research as in UFO Story above. Firstly, the old Empire still had secret bases on Earth, they had 'older type craft' still very advanced even to this day and they are the craft depicted in the film 'Hangar 18, I go into that in the 'grid' a lot, and remind one that there are two copies, one is false, see story in the 'grid'.

http://www.energygrid.com/destiny/geoff-freed/2010/11.html
See also POST 32 more on Hangar 18 and how I found the videos and POST 30 for how they might of got to the moon in the '60's' this might be misleading it ties in with my research into wormholes and stargates and Ben Rich in POST 140
Atacama
https://www.youtube.com/watch?v=uyKKlO50hMA
More on the Atacama desert
https://www.youtube.com/watch?v=QCsDTv5Gwmc
Longevity.
Now a series of videos on Aliens and possible evidence. It is make up you mind time.  I felt to do this as a change from our 'worldly problems'
The Moon and Alien bases.  They film makers are making a higher resolution.  I am not too sure about all of this. I am contacting my NASA whistle blowers.  Will let you know.
https://www.youtube.com/watch?v=DRWbmiXQba0
Make up mind time

Make up mind 2
Wow.  Now Obama has a reptilian mentor.  Make up mind 3. Of course David Icke has always supported this theory and maybe fact.
https://www.youtube.com/watch?v=icPlVPaGg_E&list=PL4
You will here eveidence in the link above about Mars and this backs up Ben Rich's statement. I got involved in the Philadelphia experiment in a round about way years on. Not in the usual way. There are many videos and links to Al Bielek and crew, Von Neuman, he did go down the spiral  (long story), Einstein and Tesla were not involved and pulled out because of the dangers to human life which proved to be true.
http://beforeitsnews.com/beyond-science/2013/01/alien-base-on-the-moon-in-detail-clear-ufo-photos-released-by-nasa-taken-by-astronauts-pilot-films-ufo-from-air-2440716.html
AMAZING  photos, videos.  Really worth looking at and the astonishing links.
A 100% chance aliens exist according to top astronomers and they tell it to Congress.  Do they know something we do not? Are they gently getting us used to the idea and then it is announced and stops mass panic?
http://article.wn.com/view/2010/09/30/Chances_of_alien_life_existing_on_Earthlike_planet_100pc_sci/
A really interesting video and site, very factual and intelligent.
This is a follow up of the attempt by the Philadelphia Experiment http://www.imdb.com/title/tt0087910/ This is the movie of it, this is more authentic http://viewzone2.com/philadelphiax.html I got involved in the later 'explanations' and should have won a bonus in my wage packet for the input, but my boss pinched it and got the applause, and the lolly. My suggestion was in brief 'as the ship disappeared and then reappeared in Norfolk, I think Virginia, dock yard, the experiment collapsed the field or went into a dimensional shift, this then had to dissipate the energy [as with the men], the energy like excess short circuit electrical energy, travels down the Earth Wire and trips the circuit breaker or blows a fuse, my suggestion ' the ship being metallic went down meridians or leys lines, dissolving like dots in a fax, and reassembled at a catch point or opposite polarity point or say positive to negative, the displaced energy then reformed and became the ship. The Ship being more solid in structure would have to use Earth energies and her displacement facilities.(June 2011 in energygrid)

This was my sole contribution spoken about above in the experiment. I have also got it on good authority that NASA is only part of the 'Black Ops / Skunk Works Ops' . There are three tiers------- NASA --which gives the public the technology of the day, that is to our present day understanding to the general public world wide.  The other two are------craft and exploration as presented by Ben Reich, which the populace would either not believe, demand more technology as free energy, putting an end to the destruction of the environment, end of war and so on, lastly involvement with ET.  This maybe two fold, the so called nasties, although this begs the question if they have all this advanced technology why haven't they wiped us out or taken over long ago? Or maybe ET have taken us over and we are living in their surreal virtual world, this world is crazy enough, who wants to commit suicide through GM, Chemtrails and so on. And the goodies who presumably cannot interfere because of time lines, Cosmic Lore and Law and want to see us come through on our own.  So what do you feel?  Some people I know just say its all a load of waffle and others say ---so what?   And I say 'its all in a days work' 'Its all in the sweet tapestry of Life'

http://healthfreedoms.org/2014/05/27/huge-two-counties-ban-gmos-oregon-fights-biotech-and-still-wins/
http://ecowatch.com/2014/03/17/france-monsanto-ban-gmo-corn/
The usual seizure risk among children aged from to 15 months is 2.65 times, but this rises to 6.53 times if the vaccination is delayed. The seizure risk is also higher among all age groups if the new four-in-one vaccine, the MMRV, which includes the rotavirus vaccine, is administered.
The increased seizure risk was identified by researchers from American’s Centers for Disease Control and Prevention (CDC), after they analysed the records of 323,247 vaccinated children, and their health in the first two years of life. In all, 5,700 children suffered a seizure, and most were among older children.
(Source: Pediatrics, 2014; doi: 10.1542/peds.2013-3429)
Researchers from the claim to be among the first to establish that gum disease is a cause of heart disease.  An association between the two has been recognised for years, but nobody was sure if poor gums were merely an indicator of deeper problems in the heart and arteries.
But studying reactions in laboratory mice, the researchers found that oral bacteria released into the bloodstream caused inflammation in the arteries and heart, which in turn triggered the release of cholesterol as a repair agent, and this caused atherosclerosis, or hardening of the arteries.
They hope that heart associations will acknowledge the importance of gum disease as another major factor in causing heart disease.
(Source: Proceedings from the annual meeting of the American Society for Microbiology, )
Hey Folks Some of these articles are research stuff.  However a check up at the Dentist is a good thing----they are expensive if you want white fillings------but worthwhile.
Be Well.  Geoff
http://www.disclose.tv/action/viewvideo/175971/Obama_Briefly_Explains_New_World_Order__2014/
Here we have it--- we are not capable of looking after ourselves.
Posted by GEOFF FREED ONLINE at 01:11