Hello.  In this Post I have put together a number of videos on 'Space', UFO's and so on. I do feel and in the light of my whistle blowers and the Astronauts themselves now coming out with extraordinary claims, there is something afoot. To give you a rest from space stuff, the next post will be different, then if all goes well Post 167 and 168 will be more Space orientated.
Apologies if this is not your taste, however, I have to cater for all sorts and what comes to me as breaking news. Often other sites get it from the same whistle blowers as I do. It depends who Posts first. I do not wish to enter a race or be the 'main man' I do it because it is creative for me, fun(not in a mocking sense)I enjoy it, as you can see I am not as professional as other beautiful and well laid out sites and graphics and I am not into the numbers game.  My grammar and lay out may have a lot of 'amateurishness' in it hopefully the information is not.  I Post what I feel is interesting, thought provoking and with a tinge of 'spirituality'---- so welcome to a 'Blast From The Past'
1977 and Ivor Mills Newscaster gets interrupted by an Alien Voice.   I actually was slightly involved in this.  I heard a broadcast and the newscaster was a Reginald Bosanquet.  I cannot find that version.
However it was reported that some students in a van near a transmitter outside Southampton UK had pulled of a hoax.  A department I am familiar with went to investigate this and they assured me that is was nigh impossible to do this without massive power and sophisticated equipment.  The students were said to have an old van and some electrical paraphernalia.
This is a leaked video of a Russian Cosmonaut. Listen particularly what he has to say about Jupiter ----compare with the slip  in OOPS VIDEO BELOW.
and of course Ben Reich.  See Post
Buzz Aldrin and Monolith slip and Mars.
Moon Base
OOPS.  MARS--PARDON ME.
DYING EX DIRECTOR OF THE CIA IN A STUNNING DEATH BEAD CONFESSION
Messages and possible contact
Stop at ancient stronaut in spacesuit.
Snowden again---interesting---the presenter lays it out as it is.

Great New Technology-----lovely, the only drawback it needs a water top up every few hundred kilometres, and water is getting short in some places and the resistance to cheap energy from Big Petro. Its my guess if it gets the nod the military will get it, they can have anything they want, so water will not be a problem

http://www.tubestime.com/watch/what-was-waiting-for-us-at-the-moon-pay-close-attention
You need to read the English Translation in the link. There are key phrases which the astronauts voices are heard. particularly listen to the Astronauts saying 'what is that ----?' and mission control saying 'Look the other way'


What was waiting for us at the Moon? Pay Close Attention

July 1969 Believe or dont believe I thought I would post this, Since I do believe that the moon is far differnet then anyone knows. I was told this was authentic, Some say it is not, but I ask you to ask someone that is old if they remember them cutting out this. Dig and you will find Please see the video response I have posted for more proof to back this video Listen to what he says very closely... About half way thru is when it gets intresting The part were he say's "Thats Rich!" If your not familiar with that it means your lieing or I don't Believe that. He says that when they tell him "We know about that" What do they know about??? They sent those astronauts out there without telling them that something was on the moon??? If this is starting to spark your intrest keep digging The report was spacecrafts were stationed near them from behind a hill looking straight at them. When they wanted to film them they immediately disappeared. Not to mention NASA didnt want them even near what ever it was... Don't listen or trust the lies of the Gov. or NASA there are controlled by the NWO-illuminati There has been SO much cover up on NASA's behalf that they might just take the CIA's place haha What lies... Moon is a U.F.O. Base!" Author Sam Pepper gave this version of the "Top Secret Tape Transcript" from "a leak close to the top," as follows: What was it, what the hell was it? That's all I want to know.... These. . . (garbled) . . .babies were huge, sir, they were enormous.... No, No, that's just field distortion.... Oh, God, you wouldn't believe it.... What...what...what the hell's going on? Whatsa matter with you guys . . . ? They're here, under the surface.... What's there.. .malfunction. . .Mission Control calling Apollo 11.... Roger, we're here, all three of us, but we've found some visitors.... Yeah, they've been here for quite a while judging by the installations.... Mission control, repeat last message.... I'm telling you, there are other spacecraft out there. They're lined up in ranks on the far side of the crater edge.... Repeat, repeat.... Let's get that orbit scanned and head home.... In 625 to the fifth, auto-relays set...My hands are shaking so bad.... Film...yes, the damned cameras were clicking away from up here... Did you fellows get anything? Had no film left by the time. . . (garbled) . . . three shots of the saucers, or whatever they were. . .may have fogged the film. Mission Control, this is Mission Control...are you under way, repeat, are you under way? What's this uproar about UFOs? Over. They're set up down there...they're on the moon... watching us.... The mirrors, the mirrors . . . you set them up, didn't you? Yes, the mirrors are all in place. But whatever built those spacecraft will probably come over and pull 'em all out by the roots tomorrow.... (I  TOOK THE LIBERTY OF INSERTING THE ENGLISH FROM THE ABOVE LINK AS IT KEPT GIVING ME 'ERROR 502 BAD GATEWAY'  THIS IS NOT A VIRUS OR CORRUPTION, IT USUALLY MEANS ITS BUSY AND IS WAITING FOR SPACE----------HOWEVER DO NOT BE TEMPTED TO GET A DOWNLOAD SOFTWARE TO CORRECT THIS ERROR AS THIS MAY CORRUPT YOU FILES AND SO ON---THIS IS SAFE) I DO REMEMBER THREE THINGS THAT WERE CUT OUT.  MORE ON THIS IN A FEW WEEKS TIME IF ALL GOES WELL, I HAVE THE SKELETON OF POSTS 167 AND 168 AND NEED TO FLESH THEM OUT WHEN I GET THE RIGHT MATERIAL AND CAN VERIFY IT WITH CONTACTS.
In the meantime keep looking up
and Be Well.  Geoff
Addendum
Since I am writing about a Blast From the Past, the Football / Soccer World Cup has commenced in Brasil.
About 61 years ago I became an apprentice to a well known London Professional Team. I had an injury and that was the end of that, although I semi played amateur park football and eventually had to pack that in.  I was still doing Japanese Martial Arts, Chinese  Kung Fu and Tai chi now Qi gong.  Yes and even had a trial with a London Cricket team, however, my eyesight and injury let me down.
I really like all sport Rugby, Tennis, wrestling, weight lifting and athletics and many more, whether it be male of female participants.
Nowadays I do the Tibetan Five Rites, Qi Gong(varies of three kinds) and gentle rebounding).
Apart from all the hype, celebrity stuff, the money, the bribery and so on someone should take a look at the referees and install video replays at big matches, they now have goal line cameras, but I guess in some matches, especially last night in Brasil in my view two players should have been sent off. It would take a very brave referee to have done that in front of the host nation and their team. 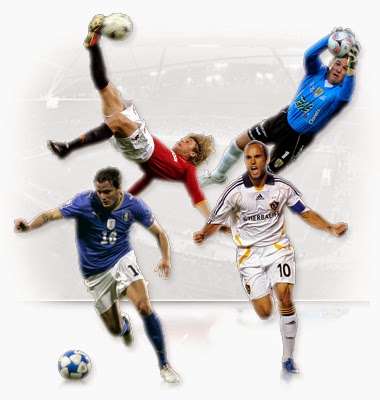 Courtesy stats.com
Unfortunately soccer like some other sports has become a profession and career and huge wages. I can fully appreciate why the Brazilian people are protesting. The poor and needy are being neglected, I know they will get money from tourists at these games, but it is hardly enough to solve their problems.
If they put video replay as in tennis or Rugby, the corruption and gambling might be curbed a bit, gamblers and 'fixers' will always find ways, their brains are sharp and street wise.  They not only like the money, they love the power that corruption brings and the 'buzz' it gives them.

I found when I got into this emptiness in sport, I could almost feel the ball, where my team mates were and the flow of energy was incredible, when more of your team are in this state the team is almost unstoppable.  There used to be and probably still is the 'Inner Game' which highlighted the zone and how to get there.  Certain top Olympic athletes used imagery and visualisation.

As the courtesy title says 'its getting in the zone' it is almost an unconscious playing where your training, which is a set of repetitive movements, make programmes, patterns in the mind, one produces neural pathways in the brain dedicated to this movement, once again programming and conditioning, no different to the brain than religious rituals, chanting, political rhetoric, brain washing.  It depends; for instance when one drives vehicle, there is a state where one does it automatically and not think as it were.
One could say that meditation brings one to emptiness, in this emptiness one does not use it for a purpose, one remains as long as is required. 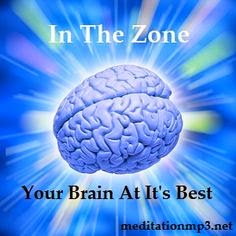 Courtesy printerest.com
So dear precious reader may you 'hang out' a modern idiom and be in the Zone and Be Well.  Geoff
Posted by GEOFF FREED ONLINE at 03:09