Greetings to the emptiness in you dear readers. It may look, sound and feel a strange greeting, however maybe the explanations below will suffice.

http://www.youtube.com/watch?v=6ryv9Xe4vX4
The Wisdom keepers of the rites of passage joining inner city kids to Mother Earth most, most important. 4 mins.

There is another rite of passage, this is the one of the emptiness as above. When sitting quietly and letting the thoughts, feelings, pain or itching pass by, and letting it be, accepting what is, being aware, staring oneself through sleep and mind drifting, there appears if one is passively patient an opening in the clouds as in Post 74. This is the gap between thoughts. Not a blank suppression or stifling thoughts, this is a natural calm event. 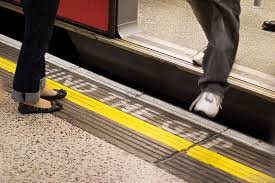 I used to use this above in meditation meetings. With the tube the platforms were sometimes curved and so the gap warning.
When we experience this alive dynamic, it is akin to staring in space BUT vitally alert, aware, although dynamic it is serenely dynamic, the whole experience is paradoxical, a koan in itself.
One is alive, very well, at peace and yet thoughtless and aware of thoughtlessness, without having the thought I am thoughtless, perhaps a better way is without thought.  Just before a complete letting go one realises there is an absence of thought, then this may occur. 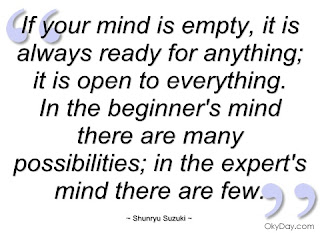 There is this debate in science whether there is a local mind and or a non local mind, I have blogged this often. In the local mind it a mind confined in the brain so to speak, I define it as a mind trapped, caged or imprisoned by a set or sets of belief systems, the expert as above, in the box. True there maybe scope for a few innovations, usually reinventing the wheel with a makeover, a cosmetic job, feels great and new till the honeymoon, the novelty or enthusiasm wears off.  Then it can be back to the same old, same old. 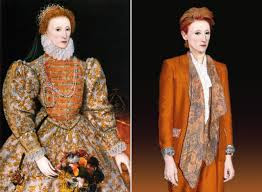 Whilst it may feel safe, known, secure to be in the same old, one can compensate for boredom by psychologically telling oneself, its safe here and I can live in peace. However comes the day when that systems of beliefs, that one may  have of the known mind patterns are challenged, then an array of defence mechanisms come into play, the attack / defend /retreat an arsenal of coping systems come into play. 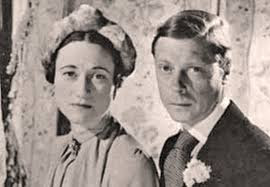 Abdication of King Edward V111 for Mrs Wallis. Simpson IN 1936

It can feel when one experiences this emptiness as if one has abdicated the 'old mind sets' and as Edward above tussled, wrestled with the implications for his country, his upbringing and so on, so does one have to come to grips, to terms, that to leave the 'thought mind process', the indoctrination, the programming, the conditioning, the brain washing,  the glue of this is hard to dissolve,  because it is so adhesive.

Rare video of yogi's and their aesthetic practises.  1hr.30 mins this just shows one how one can seem to defy the 'rules, the laws' we are so accustomed too. They fix our reality. The story of my teacher breaking the oak, 9/11, ET, all conspiracy theories challenge the norm, force one out of the comfort zone.  What is more some will go to extreme lengths to preserve the 'old tried and tested ways'

So then there ensues a battle between the local confined mind and the possibility of 'will I become a vegetable, a blank nothing, a madman, a indefinable non entity?  The probability is that if one is on the edge, teeters on the narrow ledge, the brink, the precipice, the frontier, the dividing line, without surrendering the royal kingdom as above with Edward, then one either resolves oneself back into another set of mind patterns and local roundabouts, or summons up enough energy and a kind of esoteric wisdom to take the plunge. It is a kind of surrender.
There is a difference between surrender and esoteric surrender. 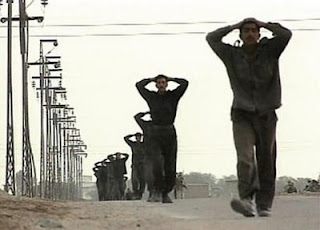 I surrender because I am defeated.  I have no option and I am reluctantly doing so, I save my life and await my fate.  I am now in the hands of my enemy.
This is still in the local mind and indeed known to many and no matter the consequences the outcome, it is the known.
Then there is psychological surrender. 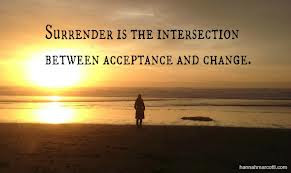 It depends, I immigrate, I adopt my new countries customs or become isolated in enclaves of like folk in my new country, or I change it feels better, it makes sense, one local mind set for another.
Then there is the abdication ah la spiritual. Spiritual here is another word in my view for the non local mind.  Here through disappointment,  disillusionment, trauma and host of other reasons or wake up calls, one decides on some sort of discipline, yoga, tai chi, meditation, and many other disciplines, one becomes  aware of many burning questions some of which are depicted in the following below.
http://www.youtube.com/watch?v=dkY5uc5FFdo
The purpose of Life. 4 mins

This kind of reasoning is still in the realm of the local mind and is valid.  Then in ones path and through the many avenues of 'letting go ' in Yoga, Tai Chi, Qi Gong and so on one catches 'glimpse' a light, an expansion and leaving the known is and becomes an intuitive knowing, a hint, not in words or logical summation, it is a deep inner knowing, even beyond a gut knowing. One is so sure to leap, and yet there is still an instinctual survival pattern hard wired into most of us, even unto reluctantly dying, say naturally and the doctors oath :
The Hippocratic Oath is an oath historically taken by physicians and other healthcare professionals swearing to practice medicine honestly. It is widely believed to have been written either by Hippocrates, often regarded as the father of western medicine, or by one of his students.[1] The oath is written in Ionic Greek (late 5th century BC),[2] and is usually included in the Hippocratic Corpus. Classical scholar Ludwig Edelstein proposed that the oath was written by Pythagoreans, a theory that has been questioned due to the lack of evidence for a school of Pythagorean medicine.[3] Of historic and traditional value, the oath is considered a rite of passage for practitioners of medicine in many countries, although nowadays the modernized version of the text varies among them.
The Hippocratic Oath (orkos) is one of the most widely known of Greek medical texts. It requires a new physician to swear upon a number of healing gods that he will uphold a number of professional ethical
standards. (some now say cynically 'Hypocrisy'  oath).

One has to overcome, not by will power and determination, and 'well I have no choice,' no a kind of natural 'knowing' when the natural intelligence of the body / mind as in a babies birth time, the contractions and so forth, so a natural death time can be so, awareness in the death process, in fact a natural rebirth from local mind to wherever.  Hopefully into the precipice of the empty mind. 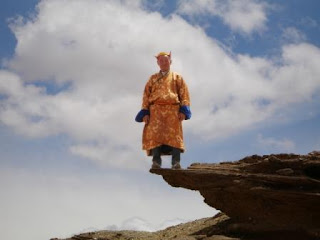 Where to now?  Emptiness.

Here the emptiness is that of the non local mind, and who knows what one's destiny is after that. This is in my view is real trust and faith, not by saying 'I must have faith and trust' these divers into the unknown vault, the space of no space, have no faith at all, because there is no god, no image, no theory, religion concept they have gone to that 'peace which Passeth all understanding ' that peace beyond thought or logic. Ah say the sceptics this is not obtainable and one will be a raving lunatic, for those who have jumped, and for my few excursions, you can do a complete leap as Eckhart Tolle did, I believe in his book 'The Power of Now' or as in Zen the short fast way, known as the sudden way or the gradual way.  Mine seems to be extremely slow, however, my NDE, Koan and various awakenings have led me to the precipice and have softened me up for the whatever next event, if there is such a thing, my teacher would have said 'you are in it or not in it'.  There is no event in the non local mind.  He would have said I guess what is it anyway?  It is like breathing it is natural, the moment you are having difficulty breathing you know what breathing is. Oy Vey(y vey (Yiddish: אױ װײ), oy vay, or just oy — or even more elaborately oy vey iz mir, oh weh! — is an exclamation of dismay or exasperation meaning something like "oh, pain" or "woe is me".[1  (SOME OF THE Yiddish expressions get to the point I feel)
To bring us back to Earth, despite being empty or not, we should ground ourselves, because as long as one is in a physical body, we have to root ourselves in Mother Earth's body energy, when we leave, we die, we  are rooted in non local mind energy and wherever that journey takes us, if we are empty and in a body we have the ability to live in an Earth body energy and empty energy as well.  What does this feel  like, although old in body, one has a feeling of being young, loose in limb, although perhaps not so, mentally free and a feeling of exuberance in a quiet mode, completely mad to everyone else because their dreams and aspirations are not what you hang on to and fret and work sweat for.  One just enjoys what is and lets it go. So I am told. 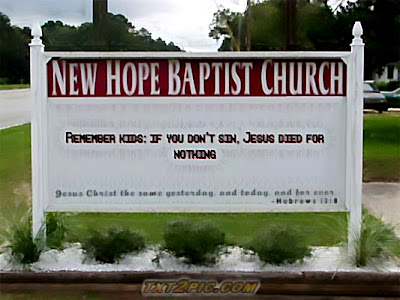 DOWN TO EARTH NOW FOLK 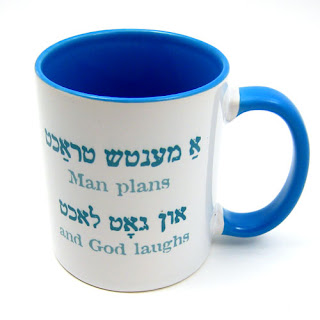 The Voice of the People Radio Broadcasts---very important.

May the voice of the people awaken the populace  to the connivances on the local mind and may this awakening lead us all to the emptiness of the non local mind, where the wisdom of harmless living and natural ways are found and are in keeping with the WAY, for this is the way of things.
Be Empty, Be Well.  Geoff
Hey dear Russ was first.  EXPLOSIVE, DYNAMITE. MUST LOOK. PHWEE.
This gentleman is the real deal, the real McCoy.
("The real McCoy" is an idiom and metaphor used in much of the English-speaking world to mean "the real thing" or "the genuine article", e.g., "he's the real McCoy". The phrase has been the subject of numerous folk etymologies.)  Just out of academic interest have a look at this site.  http://www.phrases.org.uk/meanings/real%20mccoy.html
I do some of them, but also use
bodyelastic  safety tubing and flexi bar, mini rebounder (not a trampoline or trampette,  need to use a hard mat) Qi Gong and a Chi Machine, with AIS stretching  and a genuine Flexi Bar).   Rest weekends just doing chi machine, AIS and Qi Gong, alternate tubes with flexi bar on weekdays.  All my exercise equipment is used in rehab clinics and is adapted for workouts as well.
ANOTHER SIDE TO DAVID---GREAT TO SEE, WAY TO GO DAVID.
British MP George Galloway on the Bilderbugs and G8 conference
WAY, WAY, WAY TO GO GEORGE. Interview  June 16 2013.
http://www.youtube.com/watch?v=rGg7zHXKal8
THIS IS AN HOUR, YES OY VEH, AN HOUR, I WANT TO WATCH MY TV SOAP, GOSSIP ON THE PHONE --- WELL THIS POPULAR QUESTION TIME ON THE BBC ON THE 14  JUNE 2013 WAS IN EDINBURGH AND BECAUSE SCOTLAND HAS GIVEN 16 YR OLDS THE VOTE THEY QUESTIONED WELL KNOWN MP'S I AM GLAD AND HAPPY THEY RECOGNISE THE WISDOM OF OUR YOUTH.
Thank you I know I am a boring old fart at times but I feel for our younsters and see the damage being done in so many ways.

Posted by GEOFF FREED ONLINE at 01:13