The answer lies in the Soil.  This used to be a famous Radio comedian in the UK many years back.  Greeting Folks.
This comedian used to imitate country farmers and village rural  life. Many of us older folk would know him as Bernard Miles, and in between his humour were some great agricultural tips, often disguised in his banter.

http://www.youtube.com/watch?feature=player_embedded&v=IHaMDq9s9eU
I was shocked and so sad when I saw this, it touched me deeply and as the gentleman says at the end of this 4 min video 'There is no honour in this' . Look at the policemen, looking straight ahead, I wonder if they feel guilty at the atrociousness they fulfil.  I know there has to be law and order and a quote from Osho ' If you cannot live by love, you have to live by law' and I add if you cannot live by law then you live by war. Sad and unbelievable in this 21st Century with space travel, such beautiful creations many of us live as dim shadows, flitting in and out of media celebrity hype, government and religious doctored media, and fanatical drugged up euphoric elite rich bureaucrats.


The pattern of events is that the EU is slowly bringing in these crippling food laws, please note the slow but dangerous assault on nature, of which we are intrinsically a part, so it is an assault on us.


This is I suspect the reason why the EU wants to ban herbs, supplements and natural products.

Why Are Drug Companies Interested in the Supplement Market?

What choice would you make?

Michel Chossudovsky, Professor Emertus
of Economics from the University of Ottawa
speaks at an event held in Kuala Lumpur in
2012.
These are his reflections on the criminal
mainstream mass media, in the aftermath of
9/11 and how this media cover-up of the facts
which led to the deaths of thousands of New York
City office workers and ultimately, millions of
innocent people in the theaters of wars fought in
Iraq and Afghanistan form the basis of a clear-cut
case of obstruction of justice.

Slowly and by stealth the sharp teeth are incising into our rights. The EU are less overtly barbaric than the video below.  Europe still has a remnant of the mantle of assumed democracy and care. The UK is the epitome of the smiling assassin.


Former DHS employee, Julia Davis' harrowing
story is the subject of a movie released in the
summer of 2012, 'Top Priority: The Terror Within,"
[which I am working to make available as a VOD].
The film takes the audience through the events
that led up to her property being swarmed and
raided by a SWAT team of 27 and a blackhawk
helicopter along with the deaths of four people
surrounding the case. The film also depicts the
illegal raid, and her vindication, though short
lived, when she took her former employer, the
Department of Homeland Security or DHS, to
court.

A few posts back I mentioned that many countries employ personal to monitor all blogs. By now I would have suffered the same fate as the lady above, as many more have that you do not hear of. Our phones are tapped in many cases in the USA it is said everyone is on 'file'.  There is a list of many words like bomb, jihad, private meetings and so on, that starts the computers rolling, someone listens to it and it is flagged as a possible target, it is then assessed by the officer in charge.
The point is there is a law in the UK that this kind of information is private and if acted upon and an arrest made it has guide lines in which a judge or someone in the capacity to authorise a surveillance, arrest, raid or what is considered appropriate to obtain a warrant. Then if the proceedings go against the authorities, it is often taken to court and the public banned as the evidence is not in the interest of public safety and a security risk.  After many years of legal battles and money, usually obtained by appealing to the public and donations or a caring lawyer it may force a tribunal or public hearing.

Dr David Kelly
http://www.bbc.co.uk/news/uk-13716127
This case above is an example of the British way, and even to this day the coroner's office and Home Office refuse to release his post mortem results in certificate form, saying it would distress the family.  Yet other families get the results even without media hype and coverage.
It is a shame on the personal that they are weak and gutless and are afraid to whistle blow.  The money and good pension overrides moral decency and they sit comfortable whilst others are tyrannised and bullied. It made me weep when I saw in the video above, those poor families being made to run out into the street, whilst huge big bully law enforcement officers, what was it , 23, and black helicopter and the rest, the shouting, the terror on the faces of the people and the helplessness to prove their innocence or the legal rights to do so, and the Western world condemns other countries for their lack of human rights, oh my god, what a shameful pitiful mad insane world.  The moral compass like the drifting magnetic pole is sadly out of synch. I bet the blogger readers, the scrutineers, laugh all the way to the bank, snug in their petty power, and sneer at the likes of me. I can face my maker without shame or guilt, so will they because they have lost their natural conscience, the decency  and compassion which corruption and maniacal power lust has robbed them of.

In the name of compassion and well being, Go Well and Be Well.
Geoff


Prism scandal: Agency to reveal US links 'shortly' after claims that thousands of Britons may have been spied on by GCHQ 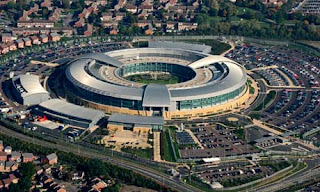 Video: US Spying: 'Govt Must Have Known'
GCHQ is to give a report to parliament's Intelligence and Security Committee (ISC) "very soon" over links with the US Prism surveillance system and claims it has been accessing information about British citizens through the body.
The big question is whether this was authorised by the Government.
Mr Davis, a former shadow home secretary, said he suspected Home Secretary Theresa May and Foreign Secretary William Hague previously knew about the Prism.
"Presumably they at least would have had to sign an authorisation for this to take place.
"(There were) nearly 200 British citizens under surveillance of one sort or other in one year so they must have known something about it."
The Tory MP told Sky News the monitoring programme appeared to allow the state to "spy on who they like" and if reports were accurate then "it is actually quite a scandal".

Because of the braking news and a switch I have felt two weeks back energetically wise world wide, I may publish daily for just a while. Trusting this OK and not load you down too much.